"I've had more time at home to look at the runners-up trophies which are set up around the house, so I've not really liked it" Michael Smith has long been tipped as the next man to make a TV title breakthrough, but after a raft of runners-up finishes, 'Bully Boy' is determined to land his elusive major crown when he returns from the enforced break.

The general consensus within world darts is that it's a matter of when, not if, the St Helens star scoops his first major title and given his prodigious talent, that's a reasonable assertion.

The 29-year-old has featured in five major finals since 2018 - three of those appearances coming in the sport's biggest tournaments - the World Championship, World Matchplay and Premier League.

World No 1 Michael van Gerwen accounted for Smith in the World Championship and Premier League showpieces, before Rob Cross denied him glory at the Winter Gardens 12 months ago.

Smith spurned darts to defeat James Wade in the 2018 World Series Finals and history repeated itself in this year's season-opening Masters, where he squandered three darts for glory against world champion Peter Wright.

Smith is no stranger to big stage success. He lifted a World Series title in Shanghai in 2018 and he also lists the World Youth Championship and multiple European Tour triumphs among his résumé, but he's hungry for more.

"I've had more time at home to look at the runners-up trophies which are set up around the house, so I've not really liked it. I need that big one now," Smith told Sky Sports.

'Bully Boy' has come closer than most to breaking his duck over recent years and he possesses all the attributes, though lacklustre starts in major finals have been a recurring theme.

He trailed Van Gerwen 4-0 in their World Championship showpiece on New Year's Day in 2019, before losing the opening nine legs of his Matchplay tussle against Cross last July.

Despite squandering three match darts against Wright in his most recent major final in January, he also trailed 5-2 on that occasion and Smith acknowledges it is an issue he must address.

"In the Matchplay final and the World Championship final - I knew I was playing the better darts going into those games," he added.

"I knew all I had to do was keep going and I would win. It just didn't happen and you try too hard and you're trying to find the form from yesterday or the previous round.

"Once it looks like you're losing, you start thinking get some legs and don't embarrass yourself and I managed to get myself into the game and then I went back to trying too hard again rather than just trying to get some legs on the board."

During lockdown, Smith was one of 101 Tour Card holders to feature in the PDC Home Tour and although he admits he struggled to adapt to the unique concept, it was extremely popular with fans.

Nevertheless, a concerning trend that has emerged over recent weeks is the increase in social media abuse directed at professional darts players, with Fallon Sherrock the latest to be targeted last week.

Smith also received vitriolic abuse following his appearances on the Home Tour and the PDPA recently published a series of guidelines to support players who fall foul of keyboard warriors.

"It didn't bother me at first but after so many, it does start getting to you. I was getting messages saying 'go and kill yourself," Smith revealed.

"You can say it is part of the game but you don't want it to be. It's the same in any sport, you get these numpties and you have to learn to deal with it I guess."

Fortunately, he is not one for dwelling on negativity and it has still been a productive hiatus for the former World Youth champion, who has shed two stone in weight ahead of the sport's return. 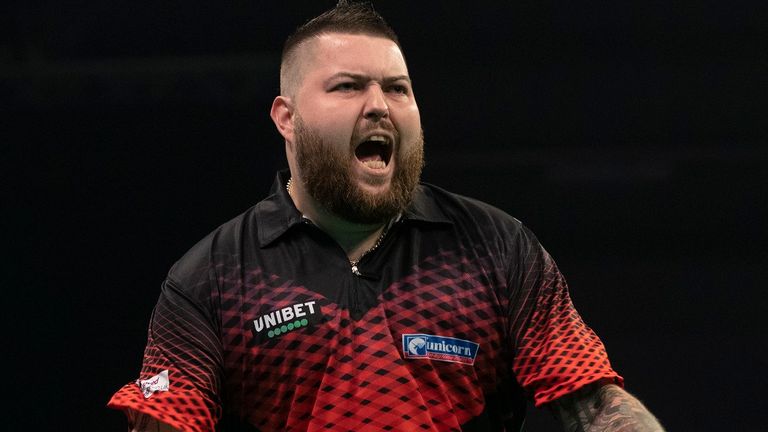 "It is going to be tough, but it is going to be enjoyable at the same time, because you have just got to remember what we have been doing over these last three or four months."

Smith on the prospect of a hectic return

Given the relentless schedule anticipated over the coming months, Smith's focus on transforming his lifestyle could prove invaluable.

"I'd say I have probably lost two stone. I hope it is not wasted! I've just been able to eat right at the right times and I've been going on 10km-15km walks with the wife and kids.

"The schedule is always busy as it is, but I think in three weeks it is going to be crazy. We have probably got 10 to 15 Pro Tours to catch up, plus the European Tour, plus the Premier League nights.

"It is going to be tough, but it is going to be enjoyable at the same time, because you have just got to remember what we have been doing over these last three or four months."

Throughout his career, Smith has forged a reputation for being one of the sport's 'good guys' and that was reaffirmed in April, where he took on a host of his supporters on a live stream for charity.

Doesn’t look like much but for me lockdown had been a bad thing because I haven’t been playing PDC but the best thing been getting my fitness up. This picture is from January before the masters to today. pic.twitter.com/vOYJhEfD7a

The nine-time PDC ranking event winner raised £5,000 for the NHS and even managed to land a nine-darter in one of the streams, fresh from achieving perfection in the Premier League less than a month earlier.

"At the start, we went out and just bought the essential stuff. We ordered face masks for our local NHS because they said they were struggling," added the St Helens star.

However, Smith will be hoping that his charitable nature does not extend to the dartboard when competitive action returns with five Players Championship events in Milton Keynes from July 8-12.

There is still some uncertainty surrounding quarantine exemptions for overseas players arriving in the UK, but Smith is raring to return, even if he concedes there will be an element of trepidation.

"It is going to be nerve-wracking because we've had four months out and we've not had any competitive stuff apart from online darts, and we don't know what regulations are going to be set out in venues," he continued.

"We need to know what regulations are in place before we start as well. It is going to be a whole different experience, but it is still exciting at the same time."

The next major on the horizon is July's World Matchplay, although it is not yet confirmed whether the event will take place with fans in attendance at the iconic Winter Gardens, or whether it will be staged behind closed doors.

It wouldn't be an unprecedented occurrence if fans were unable to attend, as the 2018 UK Open took place without spectators due to adverse weather conditions in Minehead.

However, Smith believes that playing a major event in a more subdued Pro Tour environment could benefit those lower down the darting echelons, a pattern evidenced at 'The FA Cup of Darts' two years ago.

"You saw when Gary [Anderson] won that UK Open behind closed doors, he played [Corey] Cadby in the final and I think the two semi-finalists were Robert Owen and David Pallett. No disrespect but they are not the players you expect to see in a major TV semi-final.

"With no fans there it could prove helpful for hopefully me, or players lower down the rankings. Some of the big boys like [Michael] Van Gerwen and [Gary] Anderson, they feed off the big crowd and the energy that they give them."

Smith will be hoping to go one step further at this year's World Matchplay, although his immediate focus is centred on the Pro Tour return in a fortnight's time.

The 29-year-old's last ranking title came back in April 2018 which is a surprising statistic for a player of his quality, although his pursuit of major glory may have contributed to his Pro Tour drought.

"I just want to make sure I win one of these first Pro Tours when we go back. You need to hit the ground running and a lot of people are going to be found out if they have not been practising.

"For me it is just about concentrating on these first five events and then hopefully have that first title when the Matchplay comes around."

Darts returns to Sky Sports in July, with nine days of coverage from the World Matchplay getting underway on Saturday July 16 and every day until the final on Sunday July 24.