Soutar featured in two BDO World Championships and made 50 international appearances for Scotland before entering Q School; the 43-year-old firefighter spoke to the Darts Show podcast about his stunning start to life in the PDC

Alan Soutar is no stranger to blazing a trail. The 43-year-old from Arbroath is a firefighter by trade, but he's enjoyed a blistering start to life as a PDC player, claiming the scalps of four world champions in the space of a fortnight.

The man nicknamed 'Soots' may be a newcomer to the Pro Tour, yet he boasts an abundance of darting experience, having amassed 50 international caps during his BDO days.

Soutar is also heavily involved in amateur darts and has run his own darts academy in Scotland for the best part of a decade, although he concedes he would not be playing on the PDC circuit had it not been for the effects of the coronavirus pandemic.

"I thought to myself that [PDC] may be the only avenue for darts in the next year or two. Just from my own selfish point of view, I thought it was time to go," he told the Darts Show podcast.

"I've done a lot for Scotland, I've done a lot in the BDO and county darts, but the last few weeks have made me realise even more that I can compete at that level and do something in darts that people are getting more exposure to.

"Running darts academies and running the Angus county - I'll still be involved as long as I get time to do that, but from a selfish point of view and speaking to my missis Amanda, it was time to have a go."

Soutar's decision to test himself against the world's best has certainly paid dividends thus far. He progressed through UK Qualifying School in convincing style, before making a huge impression at the Super Series.

However, he gained revenge by beating the five-time world champion at the UK Open just days later; advancing to the last 16 in his first PDC major before losing 10-8 to Chisnall in a quality contest.

"Absolute dream start. I think when the dust settled on the UK Open when I got home on Monday evening, I realised that it was a great weekend for me," he continued.

"At the time I was obviously disappointed when I lost to Chizzy, because I've got a little habit happening in the PDC where I'm getting in front of these players and then letting them back in.

"All the feedback I've had on social media has been incredible. The support is amazing so I can't not try my best and I will continue to try and stay up there with the big guys."

Mixing it with the world's elite

Soutar hasn't done it the easy way in his PDC career thus far. He drew Chisnall, Wright and Aspinall all in the opening round at the Super Series, but he is relishing the prospect of pitting his wits against the sport's elite.

"I've got lots of experience, so I'm not going in there daunted by playing the top players. I think a few of them won't want to play me, so I think that probably gives me a little foot up.

"When I was playing Chizzy on the stage we went for a break after the first five legs and we were both having a comfort break. Chizzy turned to me and said: 'You make me really nervous man'.

"When we were walking back on the stage I was chuckling to myself, thinking: 'Good, he's affected by me, who has just joined the PDC'. I was in his head a little bit, so that's interesting from a top six, top seven player in the world. It's good."

One player he's yet to lock horns with is his compatriot Gary Anderson, however the pair are already well acquainted.

🏆There's an extended interview with UK Open champ @JamesWade180 & we catch up with @soots180 live from the fire station 🚒https://t.co/4rPWEg8WOt

Anderson urged Soutar to take the plunge and join the PDC a few years ago - even offering him financial backing at an exhibition in Arbroath - and although he declined the offer, he caught up with 'The Flying Scotsman' at the Super Series.

"One of the very first people that came to me and spoke to me was Gary [Anderson]. I had a good chat with him for 10 or 15 minutes, just about me actually taking the jump and doing the PDC.

"He's been really good and Hendo [John Henderson] is always good. He is such a nice guy who imparts his knowledge towards me. He's always done that, even back in the day playing county."

Soutar - who twice competed at the BDO World Championship in 2011 and 2016 respectively - has received plenty of acclaim on social media for his exploits, and his performances have also surprised some of the youngsters who attend his darts academy in Angus. 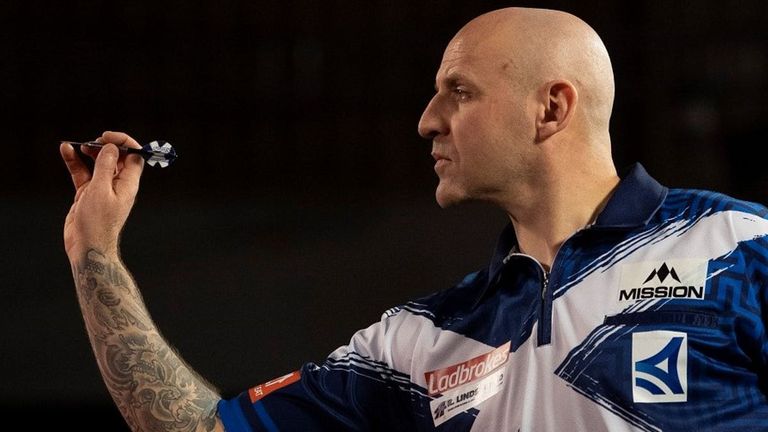 “I obviously got backing – Big 5 Management company have been at me for a few years to have an attempt at it and I’ve always said no, just because of my job and playing for Scotland, but the last few weeks have been a bit of a rollercoaster."

Soutar on his start to life in the PDC...

"I think they maybe now realise I'm not an old bald guy that runs a darts academy, I can actually throw darts," he joked.

"I think the kids were genuinely excited and it will be good once we come out of Covid to get the academy back up and running; be there and let the kids enjoy the experience as well and let them be part of it.

"Fingers crossed a trip to Ally Pally for the Worlds and some of them can come and watch, that would be absolutely perfect."

The 43-year-old could be forgiven for dreaming big. He's already accrued £12,250 in prize money over the last fortnight, which has catapulted him up to 85th on the Order of Merit.

However, Soutar's optimism is tempered by humility, and he's refusing to get carried away despite his magnificent start to life on the professional circuit.

"The plan is to stay working, the plan is to be a firefighter, because it's too much of a gamble [to give up his job]. I've had a good two weeks but that could rapidly change in the next few weeks.

"Hopefully I can make Ally Pally, that would be great, and obviously my second goal is to keep my card. I know there's a lot of work ahead to try and get to that level.

"I'm a positive person, I never think of the negatives. I always think of the positives and think I can do something, so I'm going to give it my best. I am going to try as hard as I can."