Seven days on from Jonny Clayton's Premier League success, Colin Lloyd and Mark Webster examine some of the key talking points from this year's event, including Gary Anderson's form, the current format, and the return of fans

It has been a week since Jonny Clayton lifted the Premier League Darts title on debut in Milton Keynes, and fresh from that thrilling finale, Colin Lloyd and Mark Webster dissected some of the key talking points from this year's event on the Darts Show podcast.

This year's event was one of the most competitive in recent memory. Clayton and De Sousa both landed nine-darters earlier in the event, while Michael van Gerwen was denied on Finals Night, despite wrapping up top spot for the eighth time in nine seasons.

We also celebrated the return of fans for the final five nights of action, so Lloyd and Webster had plenty to reflect on in their Premier League review...

We needed the fans back

Colin Lloyd: When you walk back from the oche and you see a sea of people - I think and hope the atmosphere will be absolutely electric as it always is at the Winter Gardens in Blackpool, which will be our next major.

I think it is soulless watching on the TV without fans. You like to hear that buzz of a crowd. It is all part of sport in general, not just the darts.

Players in any sport, they react to the fans, and to have genuine people sitting there and you're looking at them enjoying themselves - that gives you a good feeling inside and it makes you want to play well. It is great that the fans are back. 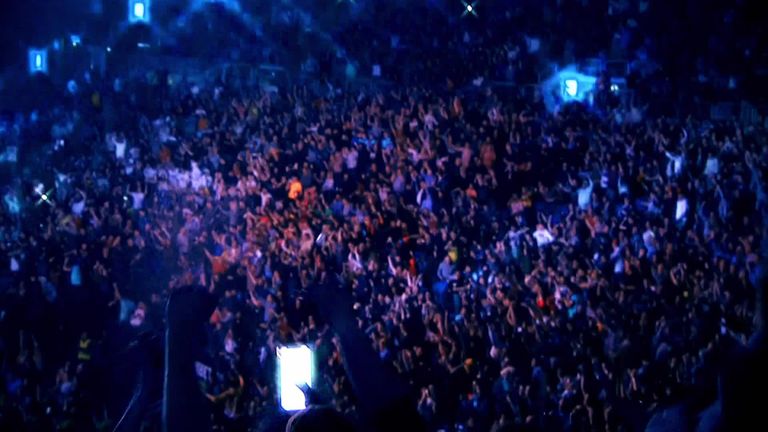 Mark Webster: They were a massive part of it and you just realise how much you need them there. They played their part, they were in the party atmosphere. Credit to the players, they put on a real good show.

Even the four that did not make the play-offs, everyone contributed to that last week and we just need to continue that. We need that packed atmosphere up in Blackpool now, that leads to the next event and the next event, and just try to get back into that normal routine.

The players thrived on it. I think they upped their game, all of them. It was fantastic to have them back. Darts should be played in front of a crowd and while the players have adapted to the empty arenas, it is time to have the fans back and back permanently.

He was in the zone. The 100 averages were there, the finishing was there, the scoring was there. Everything was in place but unfortunately for Gary there was that two-week break, and he didn't quite come back the same player.

He still had some very big averages. On the first night alone he had a 104 average against Jonny Clayton and only won one leg. Unfortunately for Gary, that is the way darts is right now. The players are really clinical.

I expect some decent things from Gary Anderson this year. I am not going to say he is back to the Gary Anderson of old that absolutely pummels everything, but I think he is very close.

He is still a great competitor, that is the main thing. He likes to prove people wrong so I'm looking forward to the rest of the year with Gary Anderson.

I think he won one from his last seven, so that highlights that he just couldn't find the victories. As good as his stats were, league darts is about winning and Dimitri will use his experience and know that he has just got to find a way to win more games.

His performance levels are unbelievable and he has got more levels. It was his first campaign and he was very unlucky to miss out, but he will be back, that is for sure.

He was a massive part of this Premier League. He had the highest finish, some of his averages were ridiculous. I think he lost twice with a 106 average and one with a 104. It is just timing and he's still got a lot to learn, he is still only a young man.

He has won a major championship at the World Matchplay. He has won a floor title, we often said on commentary he needs to tighten up on the floor, well a week later he went and won one. That is another box ticked for him.

When he looks back at that Premier League campaign he will be satisfied. I'm sure he will be back involved next year and he can use that experience and make sure he doesn't leave it until his last games to get himself sealed in that top four, because he knows he can win on that big stage.

I've thought about this and people will say 'it is too long'. I would actually have 16 players. I would have the top eight in the world, then eight others.

If you get a surprise major winner or someone who has performed consistently well, they can get in, and I would make it first-to-five each night.

I think that would be good. You would have the top eight players in the world - nobody could complain about that.

You cannot have anybody whinging saying: 'Well I think I should have been in'. It is run really smoothly the way it is now, but it's just a matter of if they wanted to add a few players. There is nothing wrong with the concept now.

I think it would make it a little bit spicier. The top eight and eight 'contenders' that are really going to work hard thinking: 'This is an opportunity for me, I can make a bit of a name for myself here'.

I think the Challengers and Contenders concept has served its purpose. I think there is that much quality now, you could actually pick more than 10 players.

That is what they want. They want options and I think the contenders has worked, it has given them experience but I don't see it returning. I think they have got the balance right.

That last night of the league phase - I would go out on a limb and say it was the best night of league darts we have had.

It went down to the last game, the jockeying for top spot, James Wade and Gary Anderson playing a dead rubber and averaging 100 each. It was a fantastic night.

Darts is back on your Sky Sports screens in July, with nine days of coverage from the iconic Winter Gardens and the World Matchplay - the action gets underway on Saturday July 17