Glen Durrant must do what is right for himself as struggles continue, says Colin Lloyd

Colin Lloyd discusses Glen Durrant's struggle for form over the past year, offering an insight into a similar period during his own career. Duzza pulled out of the PDC Super Series events this week, following successive first round defeats.

Glen Durrant's rise through the ranks in the PDC was nothing short of remarkable.

After making the switch after three successive BDO World Championship titles, Duzza immediately adapted to life in the PDC.

The Middlesbrough native reached semi-finals in the World Matchplay, Grand Prix and Grand Slam in his maiden season, and followed it up with a Premier League title in 2020.

However, his slide has been alarming in 2021. The latest result of his struggles has seen him withdraw from the two final Super Series events this week, after a pair of 6-0 first-round defeats.

"I've pulled out of the next two pro tours this week," he wrote on Twitter. "You can clearly see my 70 averages don't cut it in this PDC jungle."

Hello all thanks to my loyal supporters and sponsors

After Durrant's 2-0 defeat to José de Sousa, in which the Englishman averaged 58 in the double-start format, Colin Lloyd reflected on his struggle for form.

"He looks a shadow of his former self," Lloyd said on The Darts Show Podcast. "Only Glen can tell you what was going on.

"A game that he used to find so easy, he's finding very difficult at the moment. I feel sorry for Glen. He was on the crest of a wave. He came over, he earned his tour card, he came over with a bang and won the Premier League. And he hasn't been the same since. I don't know how he's going to address that."

Lloyd likened Durrant's woes to the decline he experienced at the end of his own PDC career:

"Something that you found so easy, you just pick your darts up, after about 10 minutes you start finding your range. The arm starts getting oiled up and you're thinking 'this is lovely'.

"But then for me personally, I can't speak for Glen, something sort of broke inside. And you're trying to fix it. You've got all the tools, but when you can't find what's broken, you can't fix it. It's a very hard thing to do.

"If he has to make that decision about whether he stays or whether he says 'stop the ride, I want to get off', he would have my 100 per cent support about whatever he wants to do. Whatever he chooses to do, that's Glen Durrant's business. That's down to him, and only he can make that decision. I know for one, he'd have the support and backing of his family. His friends, supporters and everybody would say, 'Listen, Glen, thanks very much for the memories and hopefully we will still see you around on exhibitions'." 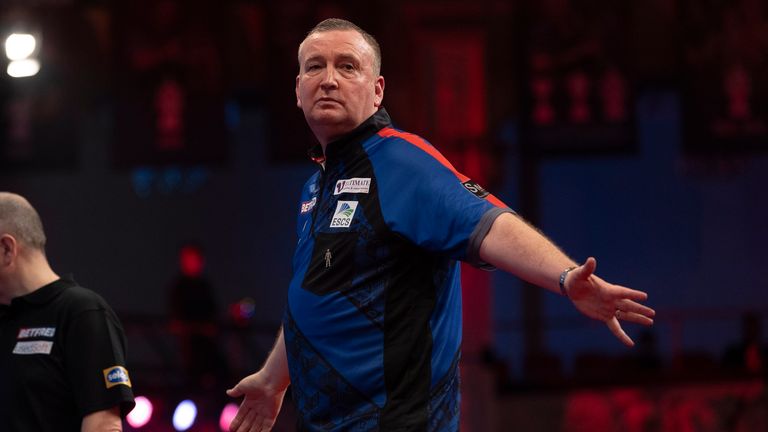 If he has to make that decision about whether he stays or whether he says 'stop the ride, I want to get off', he would have my 100% support about whatever he wants to do.

And Lloyd says there would still be a life in darts should he step away from the professional circuit.

"[Exhibitions] are where there is no pressure, he can go out, have some fun with people, throw some fun darts, sign autographs, take photos and just generally enjoy life," he noted.

"Glen really doesn't look very happy up on that stage at the moment. And he's got to find that happy medium. Do what's best for Glen Durrant, not trying to appease fans, family, whatever. He has to do what's right for himself."