Raymond van Barneveld is back. For the first time since coming out of retirement, the doyen of Dutch darts is set to feature in front of the Sky Sports cameras, and it's fitting that his return takes place at the Grand Slam - the scene of one of his greatest triumphs.

Van Barneveld famously defeated his compatriot Michael van Gerwen 16-14 in an epic final back in 2012, and he is preparing to make his first Wolverhampton appearance since 2018 after advancing through last Friday's qualifier.

Having announced last year that he intended to regain his place on the PDC Pro Tour, Van Barneveld successfully came through Qualifying School in February, before remarkably claiming a first ranking title since 2013 in just his third event back on the circuit.

"I played the Q-School this year in Germany, I got my Tour Card back and with the surprise in the first weekend in Bolton, I won a Pro Tour - Event Three," Barney told the Darts Show podcast.

"I beat Joe Cullen in the final, and since then it went great. I never thought I could do that again on the floor, especially not in the first week, so I was really pleased with that. "

The Dutchman endured a health scare at a Pro Tour event earlier this year, yet he has enjoyed a largely positive campaign - qualifying for both the Players Championship Finals and World Championship in emphatic fashion.

On top of his Players Championship title, Van Barneveld finished the Pro Tour season 24th in terms of averages, above two-time world champion Gary Anderson, who he will take on at the Grand Slam over the coming days. 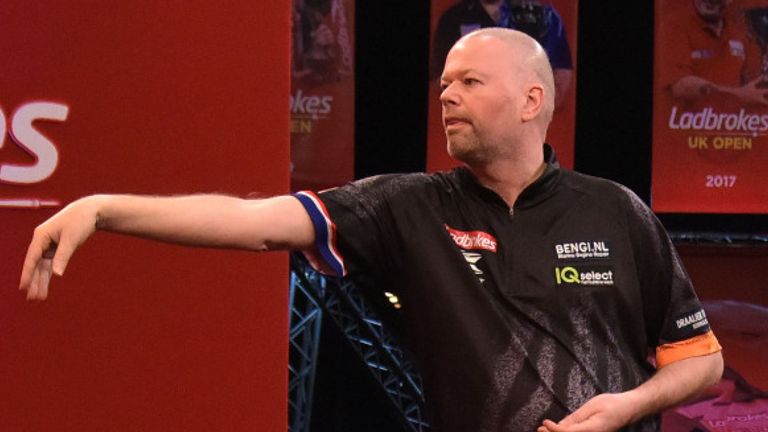 "It is good to be back and see all the familiar faces, and I must say, the level of this sport is unbelievably good at the moment."

He also posted a stunning 115.73 average in a Players Championship event back in July, while Alan Soutar and Martin Schindler are the only new Tour Card holders to have accrued more prize money than RvB in 2021.

"It is good to be back and see all the familiar faces, and I must say, the level of this sport is unbelievably good at the moment," he added.

"I am really over the moon to be back in the Grand Slam of Darts, I was really happy. I said this year I am aiming for the World Championship and to get my Tour Card back, so everything else I see it as a bonus.

"I can't wait to play on stage again with this amazing crowd, and I am going to do my very best."

Van Barneveld has been pitted against two-time finalist Anderson, world No 10 Michael Smith and World Youth finalist Joe Davis in a tough-looking Group G, and he is bullish yet philosophical about his prospects.

"I am practising hard at the moment. Of course I can beat Gary. I can beat everyone if my head is right and if my darts are okay. If that is not going to happen, don't worry, I'm fine," he added.

"Gary is not in great form, but that says nothing. He is still the runner-up in the World Championship final last year. He can do the business and we all know that.

"Michael [Smith] is a tough cookie of course. He is the only player in the world who has whitewashed me on TV. If he is in his rhythm, he is unstoppable. We don't know much about Joe Davis, but he can be the surprise of the group."

Van Barneveld has virtually seen it all throughout his illustrious career. His incredible longevity has seen him capture ranking titles across four separate decades, and he is still capable of mixing it among the elite.

Phil Taylor and Van Gerwen have both enjoyed their respective eras of dominance, although the strength in depth within world darts at present has never been greater.

"Now you are losing with 100 averages. I remember against Scott Mitchell [last month] I had a 101 average and I lost 6-5.

"There are people losing with 109 and 111 [averages]. What is this all about? It is hitting your doubles first, but if you don't win the bull, sometimes you could be in trouble.

"The likes of Peter Wright, Gary Anderson last week - all of these players were there. Jonny Clayton who is in massive form, he didn't win a Pro Tour last week.

"I think Peter Wright's best result last week was a second round. Michael [van Gerwen] is not winning them all. That says enough of the quality of the players at the moment."

Van Barneveld is regarded as one of the sport's ultimate enigmas - capable of producing brilliance on the biggest stages, while equally susceptible to shock defeats.

However, where the Dutchman is concerned, mentality is the key. He famously credits his 2014 Premier League triumph to reading a motivational sign on the tournament sponsor's wall, and the rest is history.

When Barney believes, anything is possible, and his current carefree demeanour provides a stark contrast to the desolate and often desperate figure that graced the sport's biggest stages prior to his retirement.

The 54-year-old was bidding to replicate his old foe Phil Taylor by enjoying a fairy-tale farewell, although those dreams soon became a nightmare, culminating in a shock World Championship exit at the hands of Darin Young.

Van Barneveld will have another shot at Alexandra Palace redemption next month, but he's relishing the opportunity to write another chapter in his decorated story.

"I feel I have nothing to lose. I'm not going to say I'm going to win this tournament or I'm going to the Worlds or the Players Championship," he said.

"I'm just happy to be back on the biggest stage. This is what it's all about. I missed it. The Grand Slam of Darts is a great opportunity.

"One week later we go to the Players Championship Finals and two weeks later - the World Championship. I cannot wait for the next three tournaments and I'm going to make sure I am ready for it."

Don't miss a dart with all nine days of live Grand Slam of Darts action from Wolverhampton's Aldersley Leisure Village getting under way on Saturday, November 13 - join us from 1pm on Sky Sports Arena.