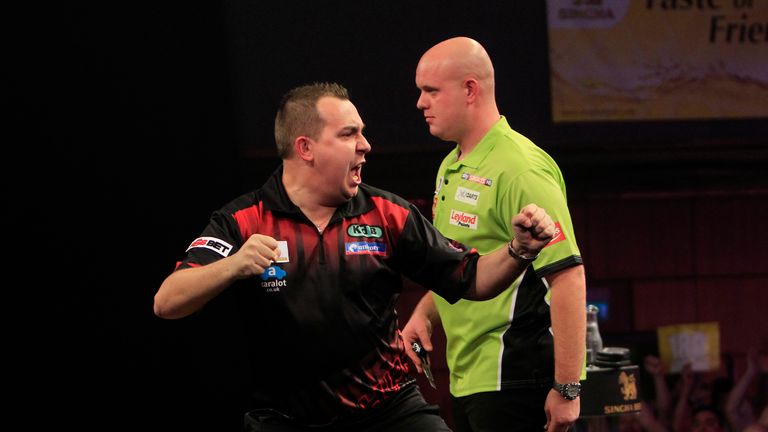 Kim Huybrechts produced a phenomenal display including his first TV nine-darter to dispose of world champion Michael van Gerwen 16-10 and secure a semi-final spot in the Grand Slam of Darts, where he will face Dave Chisnall.

‘The Hurricane’ simply blew van Gerwen away in the opening stages, quickly moving 6-2 in front and then 12-3 as he took 11 of 12 legs and dominated the world No 1 in a fashion never seen before on the big stage.

When van Gerwen finally got a leg back for 12-4, he then went on a menacing run taking four legs on the spin but Huybrechts stopped the rot himself before then pulling out a superb nine-darter in the 21st leg to go 14-7 in front.

Another leg put him on the brink of the semi-finals, but such is van Gerwen’s attitude that he never gave up, and dragged another three legs out to threaten an almighty comeback, but after missing one match dart Huybrechts made no mistake next time around to complete the memorable victory.

“I’m absolutely buzzing, what a brilliant game,” said Huybrechts, who averaged 104.8, hit 12 180s, had five ton-plus finishes and was 59 per cent on his doubles.

“Michael didn’t take his chances obviously, when he’s firing there’s only one player who can beat him and that’s Phil Taylor. He wasn’t there, but I’m happy with my performance, I’m so happy.

“That has to be the best performance of my life - a nine-darter, a win against the World No 1, the world champion in a big tournament. OK, he may not have played at his best but for me personally, that’s the best game of my life.”

Huybrechts will go up against Dave Chisnall for a place in the final after the St Helens man produced a remarkable comeback in the first match of a top-quality night of action in Wolverhampton – as he came from miles back to end young Keegan Brown’s exciting adventure.

World No 8 Chisnall was never in front until the 29th of the 30 legs the two played out in a fascinating encounter, which saw the St Helens man eventually fight through to a 16-14 victory.

PDC world youth champion Brown dumped five-time world champion Raymond van Barneveld out in the last round, and looked for most of the match as if he’d move on into a dream semi-final in just his third big TV event.

A flying start saw him go 6-1 in front, with only a maximum 170 outshot from Chizzy getting him a leg on the board, and from there Brown opened up a six-leg lead at 8-2.

The game followed a familiar pattern with Chisnall pulling back a couple of legs but then Brown stretching it out again until he led 12-6 and then 13-8.

With the finishing line in sight though Brown started to get nervous, just as he did against Barney when the big Dutchman almost grabbed a spectacular comeback.

Chisnall then took out 102 and 97 en route to taking four straight legs to get within one at 13-12 an ensure there was a nerve-jangling finish to come.

Both men missed doubles as they traded the next few legs before Chisnall drew level at 14-14, then pinched the darts to throw for the match, when Brown missed a Bull to save himself before Chisnall took out 100 to clinch the remarkable win.

“What a game, this young man here is so, so good. I didn’t think he’d come out and play as well as he did,” said Chisnall after the match.

“He was unbelievable, I don’t know how I won the game really, I just battled and battled, he missed a few shots I missed a few doubles. But I’ve got to praise this kid, he’s really, really good.”