Taylor refutes talk of a comeback in an exclusive with Sky Sports; the 16-time world champion also reacts to Raymond van Barneveld's potential return and assesses the current state of world darts.

Despite the recent conjecture surrounding the standard in the modern game, Phil Taylor insists there is no prospect of him joining his old rival Raymond van Barneveld in making a comeback to the professional darting circuit.

The 16-time world champion has previously hinted at a comeback since hanging up his arrows almost three years ago, while Van Barneveld announced two months ago that he intends to compete at PDC Qualifying School in January in a bid to return to the tour.

Taylor rolled back the years with some virtuoso performances in online competitions during lockdown, although he told Sky Sports that he would be unable to cope with the rigorous schedule.

The PDC circuit is renowned for its gruelling nature, which has been exacerbated by the truncated schedule that was enforced to compensate for the mid-season hiatus.

Peter Wright and Gerwyn Price were among the high-profile names to cite fatigue and a lack of energy at the weekend's Players Championship Finals, and Taylor sympathises with his former colleagues.

"Now if you drop your guard at all with these players, you're going to get beaten," admitted Taylor. 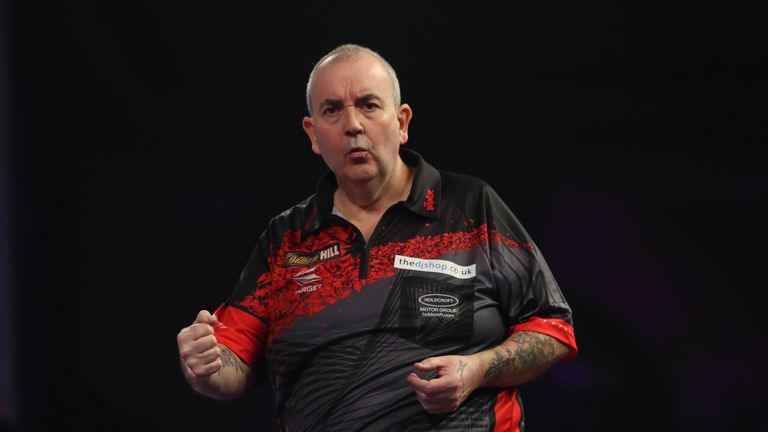 "My heart goes out to them. I'm glad I've retired now because no way could I have done this schedule. Not a chance. Not at my age."

Taylor on the current PDC schedule...

"You've got to have the stamina because the schedule is so busy, plus you've got to play in tournaments and be away from home all the time, that's the hardest part.

"My heart goes out to them. I'm glad I've retired now because no way could I have done this schedule. Not a chance. Not at my age."

One player that has flourished over recent weeks has been James Wade. The nine-time major winner made back-to-back major finals at the European Championship and Grand Slam, although he's also generated headlines for other reasons.

'The Machine' ruffled feathers when he claimed the world's top 10 was 'very weak', claiming: "The standard isn't what it was. It's definitely a better standard throughout but the top 10 or 12, I think it's quite a long way off."

'The Power' concedes the world's elite may lack the consistency of their predecessors, although he believes the hectic schedule coupled with the strength in depth is instrumental in the levelling out we've seen throughout 2020.

"I think it's harder for them to have a higher standard like we had. I wasn't playing as many tournaments, so I had time to prepare for the next ones, whereas now you're playing one tournament after the next," he added.

"Anybody now can knock you out first round. That is actually the hardest part. It doesn't matter if you're world No 1 or world No 100, they can still produce on the day."

Taylor was still competing among the world's elite when he walked away from the sport following the 2018 World Championship, having scooped a 16th World Matchplay crown before progressing to an Alexandra Palace final.

By contrast, Van Barneveld endured a desperately disappointing farewell campaign, and while the Stoke-on-Trent veteran believes the Dutchman is still capable, he admits the prospect of Q School does not appeal to him.

"The worst part for Raymond is he's got no ranking anymore, so he's got to start from the very beginning again.

"He's got what it takes, but I think age has caught up on him a little bit and health wise. He is going to struggle, especially with these youngsters.

"They're skipping round at 8:30am in the morning whereas you're shattered! It's hard when you're getting older, trust me."

It's been an unprecedented year in the darting world, and the absence of crowds has also been a factor in the unpredictability, with Dimitri Van den Bergh, Glen Durrant and Jose De Sousa winning big PDC majors for the very first time.

Despite winning the Players Championship Finals at the weekend, Michael van Gerwen has struggled since the restart, whilst Wright has also bemoaned the sterile atmosphere over recent weeks.

However, having enjoyed great success in the now defunct Championship League, the 16-time world champion would be unperturbed about playing in major events behind-closed-doors.

"We used to play a tournament without fans at Crondon Park [Championship League]. I quite enjoyed it because you can concentrate. I think I hit more nine-darters there than I did anywhere else. I was fine with it.

"It would be different at the Worlds obviously but I think if we had a tournament now and I played in it at my best, I'd have loved it." "Would I win it now? No! I've not practised enough. I'd give them a fright though!"

Taylor on whether he could still compete...

Despite Taylor's insistence that he will never return - his competitive edge certainly hasn't dwindled and he revealed that he still believes he could mix it with the world's elite.

So, if the 60-year-old was in this year's Alexandra Palace field, would he be capable of challenging for the Sid Waddell Trophy?

"Would I win it now? No! I've not practised enough. I'd give them a fright though," he quipped.

"Mind you I've got a month, I'd have a chance. I wouldn't do too badly I don't think.

"It depends on what draw really. Those young players now - they haven't really played me very often, so they'd either be frightened of me or they'd play out of their skin.

"It's one of those where you really try your socks off or you play rubbish. I never got easy games. Every player I played, played well."