In the latest special series from The Darts Show Podcast, 'Jackpot' tells us the story behind his walk-on song, why it wasn't such a popular start for his tune in Newcastle, and an offer from Glen Durrant for his song; Download & subscribe to The Darts Show podcast via Spotify 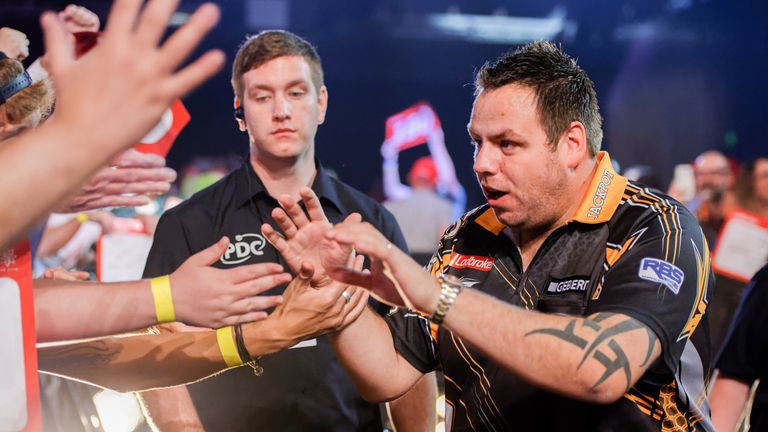 In the sixth of our series, two-time world champion Adrian Lewis tells us the story behind his walk-on song.

The Premier League kicks-off on Thursday February 3, live on Sky Sports, and one man who has entertained crowds all over the world is Lewis.

Lewis has appeared in 10 editions of the tournament and was a runner-up in 2011 and although he has not tasted victory in the competition, he has hit two nine-darters, once in Belfast in 2016 and then again in Liverpool in 2017.

Despite dropping down the rankings in recent years and having not tasted glory in front of the Sky Sports cameras since his World Cup win with England in 2016, Lewis remains a firm favourite amongst darts fans around the globe.

The 37-year-old has a host of titles to his name and if he can recapture his top form again, you wouldn't bet against him adding to the list of honours again.

The walk-on is part of the show and in this series, we talk to the players to find out a little bit more about their entrances to the stage that get the party started all over the world.

Lewis' walk-on is certainly one that gets the crowd going as Jackpot takes to the stage to the tune of Reach Up by Perfecto Allstarz, but it was a rocky start for his tune in Newcastle.

He said: "At the time, I was doing a lot of exhibitions with Paul Booth and he said I've got a great song for you. I listened to it and thought great, brilliant that is.

"Then a couple of weeks later, I was playing in the Premier League and we went to Newcastle for the first time in the Premier League I think it was. There I was standing there, and the song comes on and I was getting booed! I thought hold on, what's going on here, I'm not used to this! What it was, is that I didn't realise it was Middlesbrough's walk-on song!"

In the video, the former UK Open winner tells us about the best atmospheres he has experienced in the sport, why he is a big fan of Nathan Aspinall's walk-on tune, and why Glen Durrant is after his song.

"There was a story that came out when Glen Durrant came over to the PDC, as that is his walk-on song because he is a Middlesbrough fan. Apparently, he offered me £5,000 for the walk-on but I can't remember him saying that. He might have done but obviously I thought it was in jest, but I don't think I will change my song," he said.

It's not long to wait until darts is back on Sky Sports, the Premier League starts on Thursday, February 3 in Cardiff.