Sebastian Vettel's Aston Martin career has lift off after fifth in Monaco is followed up with second place in Baku; "As soon as we were in the podium ranks I really also thought that we can have a say if something happens," says Vettel, who had started 11th 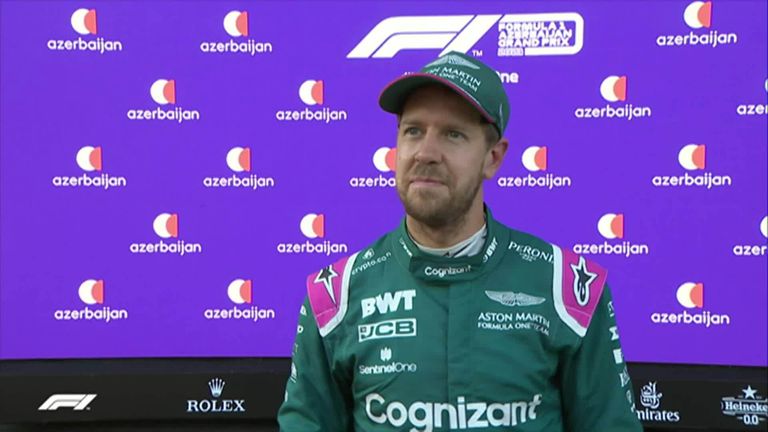 Sebastian Vettel admitted he was "over the moon" to deliver the first podium of his Aston Martin career after a driver-of-the-day performance in the Azerbaijan GP.

Finishing second from 11th on the grid, Vettel secured his best result since October 2019 when at Ferrari and claimed the first rostrum finish for the Aston Martin team name in F1.

"A great day. I'm over the moon," said a beaming Vettel, whose race came alive via impressive pace in an 18-lap opening stint.

Returning to the track after his first stop in a net sixth place on fresher tyres than the cars ahead, Vettel overtook both Charles Leclerc and Pierre Gasly in the opening lap when the race resumed following the high-speed accident for Lance Stroll in the sister Aston Martin car.

Vettel then gained two more positions when Max Verstappen crashed out - an incident which triggered a red flag and the temporary suspension of the race - and then from Lewis Hamilton after the Mercedes driver slid off the track at the restart.

Second in Baku behind Red Bull's Sergio Perez follows hot on the heels of Vettel's strong drive in Monaco, where he scored his first points for his new team with fifth place.

The 122nd podium of his career on Sunday was a particularly sweet one for the quadruple champion.

"It's also been a while, so I think it's always nice if you join a new team get together good results," said Vettel, who has now claimed podium finishers for four different teams in F1.

"I sat here on Thursday and said that I'm in it to win and I enjoyed the race because I was getting closer and closer to spots that I enjoy more and more.

"Obviously when I was P4 I know that's good points for the team, for myself but as soon as we were in the podium ranks I really also thought that we can have a say if something happens. We need to be there, be sharp."

The German, voted driver of the day in the F1 fans' vote for the second event in a row, added: "In the red flag I stayed in the car, wanted to stay in the zone and not distract myself, so to be ready.

"[I] felt that we obviously did the best we could today."