"Their pace was just unbelievable today," says Lewis Hamilton, who admits Mercedes might be "in trouble" if Red Bull continue speed to finish season; But seven-time champion will "keep pushing" in final four races as he chases record crown

Lewis Hamilton says he was powerless to stop Max Verstappen from winning the Mexico City GP due to Red Bull's "unbelievable" pace on a "day to forget" for Mercedes, but insists he is not giving up on the 2021 championship despite losing more ground to his on-form rival.

Verstappen extended his title lead by another seven points to 19, with just four races remaining, on Sunday after storming past both Mercedes cars at the start before cruising away from Hamilton over the following 70 laps.

"I feel like I maximised what I had," Hamilton, who started and finished second, told Sky F1. "But jeez... their pace was just unbelievable today.

"There was nothing I could do to battle that."

Hamilton added that Red Bull's car was "far superior" and that he was only high up on the grid in the first place because his rivals "messed up" their qualifying. At the end of the race, Hamilton finished 16 seconds behind Verstappen but managed to hold off Sergio Perez - a defence that saved him three points in the championship.

"If they carry that pace into the next races then we might be in trouble," admitted Hamilton, but he still holds hopes of claiming a record eighth world championship come the last round in Abu Dhabi.

"We've got four races to go and we just have to keep pushing," said Hamilton. "I don't know where this performance has come from today but they were half a second quicker than us a lap, which is what we saw earlier on in the weekend.

Sky F1's Jenson Button, the 2009 world champion and Hamilton's former team-mate said of the Mexican GP: "Today was a tough one for Mercedes. It wasn't just a strategy for them that was wrong, they just didn't have the pace and we haven't seen that for a long time. But it's swinging every race.

"It's definitely not over for Mercedes. This team will come back." 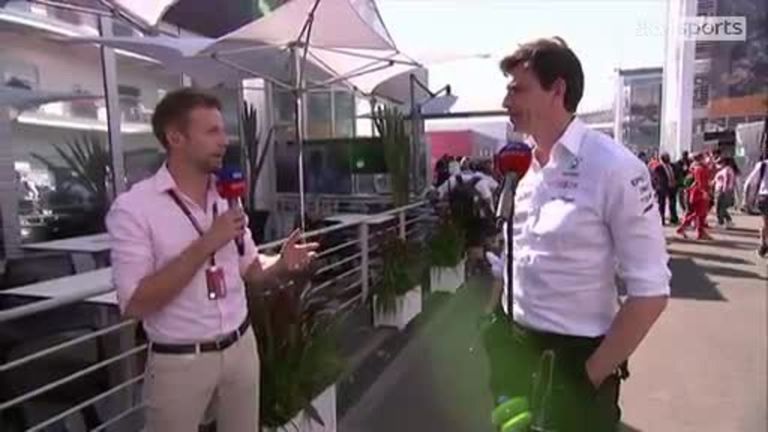 Red Bull on 'another level' but Merc praise 'brilliant' Hamilton

Despite locking out the front row in qualifying, Mercedes were just never really in the Mexico fight on Sunday. From a nightmare start, with Verstappen overtaking both cars and Valtteri Bottas sent spinning back, to a lack of pace, Toto Wolff admitted the world champions had "a day to forget".

"You have to congratulate Red Bull because the pace was just on another level," the Mercedes team boss added to Sky F1.

"I don't think we could have won the race even if we had stayed ahead in the first corner because they could have driven circles around the pit-stops.

"So in the end I think for Lewis' championship it was damage limitation, as for the constructors [Mercedes are now only one point ahead of Red Bull], Valtteri spinning out Turn 1 was just very painful."

Wolff was however unhappy with his drivers' strategy at the start as Bottas let Hamilton up the inside but crucially allowed Verstappen to sweep past around the outside.

"That should not happen," said Wolff. "We had two cars in front and seemed to opened up the sea for Max to come around the outside. The spin afterwards when there could have been a third or fourth place is annoying to say the least."

But he still stressed: "We have to take the positives, Lewis I thought drove a brilliant race with the equipment he was given, holding on in the way he did for P2. That is really the highlight for me today. Now it's about picking ourselves up."