WATCH and LISTEN in full to Lewis Hamilton's Spanish GP pole position lap as he reaches a unique qualifying century in F1.

Lewis Hamilton hit another historic Formula 1 milestone in Spanish GP qualifying after claiming his 100th pole position, with the seven-time champion just outpacing Max Verstappen in another thrilling and incredibly close battle between the 2021 title protagonists.

Fourteen years after his first pole, Hamilton hit a century on Saturday with a typically fast and error-free display in his Mercedes and won the Q3 battle against his new young rival by the skin of his teeth.

Hamilton and Verstappen, whose fastest times both came on their opening laps of the final shootout, were split by just 0.036s come the end of a gripping session with Mercedes edging Red Bull.

"I can't believe we're at 100 and it's down to the men and women who are back at the factory, continuously raising the bar and never giving up," said Hamilton, 36.

"Who would have thought at the end of 2012 when we made the decision to partner that we would be qualifying at 100. So I feel very humble and very grateful. I'm ecstatic, like it's my first."

Verstappen had threatened to end Mercedes' eight-year pole streak in Barcelona after heading into Q3 with a 0.2s advantage, but just couldn't keep up with Hamilton at one of his favourite circuits.

"Second for us here on this track is good for us," said Verstappen. "I can be happy with that. I hope we can have a good race [on Sunday]."

Valtteri Bottas was close behind in third, a tenth of a second off the 1:16.741 of his Mercedes team-mate.

There was then a big gap to the rest of the chasing pack - which was led by Charles Leclerc, qualifying fourth for the third time in four 2021 rounds. 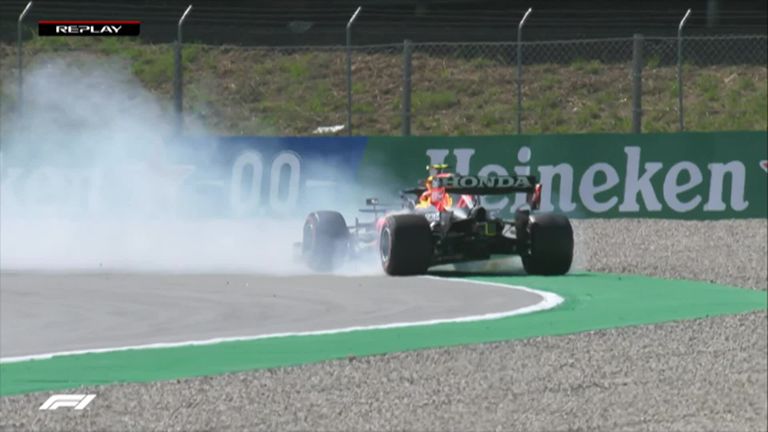 Sergio Perez spins off at Turn 13 but avoided damage to his Red Bull in Q3.

Sergio Perez was a disappointing eighth in the second Red Bull, with the Mexican under pressure throughout the session and then spinning on his first Q3 lap to put him firmly on the back foot.

He qualified ahead of Lando Norris, who has his lowest grid slot of the season, and Fernando Alonso, who made Q3 at his home race but was over half a second slower than team-mate Ocon.

The Aston Martins of Lance Stroll and Sebastian Vettel narrowly missed out on Q3, as did Pierre Gasly - whose AlphaTauri team-mate Yuki Tsunoda was the unexpected casualty of Q1.

Tsunoda qualified 16th, behind George Russell, after making an error on his final lap of the opening segment.

How Hamilton edged Verstappen as next 2021 duel awaits

The epic 2021 battle between Hamilton and Verstappen has continued at the Spanish GP - but heading into Saturday it looked like Hamilton, who had sealed five of his 99 poles at the Circuit de Catalunya, and Mercedes were the firm favourites for qualifying.

Verstappen, however, turned that narrative on its head in final practice and then in Q2, when he posted an eye-catching time to lead Hamilton by a couple of tenths. Could Max, in his 100th race for Red Bull and at the scene of his remarkable debut victory back in 2016, really deny Hamilton? Verstappen and Hamilton were tucked closely together on-track for their first laps of Q3 and there was almost nothing between them after 16 corners of the circuit, the Englishman just doing enough in the middle sector to hold the edge.

It was all setup for an epic final duel on the last lap but, while Verstappen slotted in behind Bottas to receive a tow on his lap, none of the leading drivers managed to improve on fresh soft tyres.

We are, however, set up for a thriller on Sunday with Hamilton and Verstappen sharing the front row.