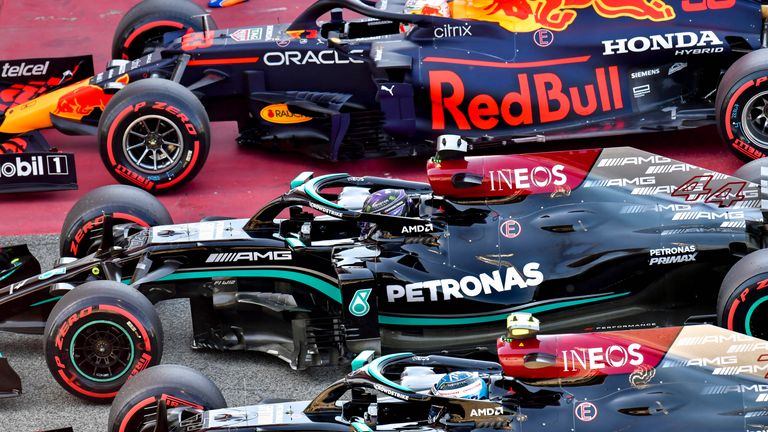 Fresh from the news that the Turkish GP now will not take place in June, Sky Sports News' Craig Slater provides an update on how the F1 calendar now stands.

Formula 1's early-summer schedule has been reshuffled with the Turkish GP withdrawn from its planned June slot and a second race in Austria added later in the month as part of the latest change to the 2021 calendar.

A Turkish round at Istanbul planned for June 13 was only added to the schedule two weeks ago as a replacement for the Canadian GP, which was itself called off due to Covid-19 travel restrictions.

But with Turkey added to the Government's travel 'red list' last Friday, plans had to be redrawn again by the UK-based sport and, as a result, the Istanbul event is now unable to take place on that date either.

While there will no longer be a race on the weekend of June 11-13, the French GP will move forward from its original slot by one week to June 18-20 for the first leg of a newly-created triple-header.

F1 will then head straight to Austria for a consecutive races at the Red Bull Ring. The Styrian GP on June 25-27 will be followed by the Austrian GP on its original date of July 2-4.

The championship successfully staged two races in Austria, under the same race names, to open the delayed 2020 season last July.

A record 23 races remain scheduled for this season.

What does the rest of the F1 calendar look like now?

F1 said in a statement that promoters in Turkey had "requested that we look at the potential opportunity for the race to be rescheduled later in the season if possible, alongside China who made the same request earlier this year".

Stefano Domenicali, F1's president and CEO, said: "We were all looking forward to racing in Turkey but the travel restrictions in place have meant we are not able to be there in June.

"Formula 1 has shown again that it is able to react quickly to developments and find solutions and we are delighted that we will have a double-header in Austria meaning our season remains at 23 races.

"I want to thank the promoter and authorities in Turkey for all of their efforts in recent weeks and want to thank the promoters in France and Austria for their speed, flexibility and enthusiasm in accommodating this solution. We have had very good conversations with all the other promoters since the start of the year and continue to work closely with them during this period."

F1 continues to act decisively amid the evolving global situation, with the 2021 schedule already undergoing several revisions since the original season calendar was announced last November.

"The current Covid-19 situation remains fluid and we will continue to monitor the situation with the promoters and teams, but Formula 1 has again shown it is able to deal with these challenges and adapt swiftly to reduce the impact on the season," F1's statement said.

Four Grands Prix have taken place so far this season, with the events continuing to operate under strict Covid-19 protocols amid regular testing of personnel. F1 has conducted 17,000 tests so far this season with 15 positive cases, a rate of 0.1 per cent.

Your next six F1 weekends ⤵️

F1's showpiece Monaco GP returns next week after being cancelled in 2020 amid the early stages of the pandemic.

"We are also delighted that we are beginning to see fans returning to our races with up to 40 per cent capacity in Monaco next weekend," read F1's statement.