Kimi Raikkonen announces Formula 1 retirement at end of 2021 season, saying 'it is time for new things'

"It was not an easy decision but after this season it is time for new things," says the 41-year-old former world champion as he calls time on an F1 career spanning 20 years, 21 race wins and 103 podiums; cult hero Raikkonen is Ferrari's most recent world champion

Kimi Raikkonen will bring the curtain down on his long and illustrious Formula 1 career at the end of this season.

The 2007 world champion, 41, joined the grid in 2001 and has competed in more races than any other driver in the sport's history.

Raikkonen has raced for Alfa Romeo for the past three seasons since ending his second stint at Ferrari.

Announcing his retirement on Instagram, Raikkonen said: "This is it. This will be my last season in Formula 1.

"This is a decision I did during last winter. It was not an easy decision but after this season it is time for new things.

"Even though the season is still on, I want to thank my family, all my teams, everyone involved in my racing career and especially all of you great fans that have been rooting for me all this time.

"Formula 1 might come to an end for me but there is a lot more in life that I want to experience and enjoy. See you around after all of this! Sincerely Kimi."

Finnish countryman Valtteri Bottas is considered the favourite to replace Raikkonen at Alfa Romeo next year with George Russell appearing set to take the former's seat next to Lewis Hamilton at Mercedes.

F1 president Stefano Domenicali said: "Kimi is an incredible part of our sport, a personal friend and a true champion.

"I had the privilege of working with him at Ferrari and know the fantastic person he is. We will all miss him and his unique style and wish him and his family the best for the future." 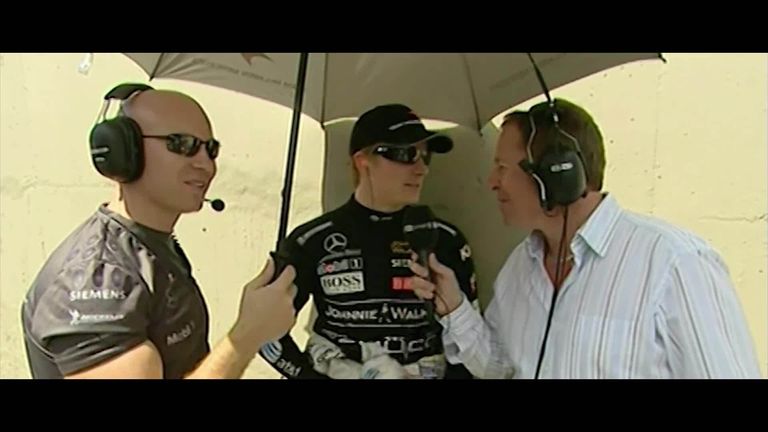 Raikkonen: The cult hero and the classy racer

One of world sport's most famously laconic stars, Raikkonen has established a cult following among fans during his two decades in the sport since making his debut aged 21 with the Sauber team (which is now Alfa Romeo).

Kimi's calling it a day at the end of the season. Nineteen seasons, 21 victories, a world title - and always doing it his way. A heartfelt salute to a top guy and immense talent.

At his peak, the Finn was for a time considered the grid's outright fastest driver and he won the majority of his 21 races in the 2000s with first McLaren and then Ferrari, where he became world champion in his first season in red after being selected to succeed Michael Schumacher.

Raikkonen overhauled fractious McLaren team-mates Lewis Hamilton and Fernando Alonso at 2007's season finale in Brazil, having been almost out of mathematical contention with two rounds to go.

Dropped by the Scuderia two years after his title win, Raikkonen left F1 for two years and competed in the World Rally Championship before returning for a second stint in the sport from 2012 with the then-Lotus team.

A legend is hanging up his race suit…a privilege to have watched him race…(and to have been so brilliantly coached by him to race, on ice 🤔😬) #ThanksKimi 🇫🇮

Raikkonen impressed on his return and in two seasons at the Enstone outfit won twice and finished on the podium 15 times. Rehired by Ferrari for 2014 to begin a second stint at Maranello of five seasons, the Finn generally played second fiddle to first Fernando Alonso and then Sebastian Vettel but won for a final time at the 2018 United States GP in Austin, aged 39.

In the history of @F1 you left a mark that few others have. I’ll always be grateful for having had the privilege of being your teammate. Thank you, Maestro 🙏#Kimi7 #Raikkonen pic.twitter.com/xzf671WENQ

He then went full circle by returning to the team he started with and at last October's Eifel GP at the Nurburgring broke Rubens Barrichello's record of 322 race starts. Raikkonen has now raced in 341 Grand Prix with 10 races still to go of what will now be his final season.

Alfa Romeo boss Fred Vasseur said: "There isn't any driver out there like Kimi Raikkonen. His presence, his charisma and his unique attitude, matched with the innate skill that made this team give him a chance back in 2001, have made him a legend of our sport in a way which numbers and statistics struggle to convey.

Kimi Raikkonen in F1: The stats

"It was a pleasure to work with him in these years."