Sara Misir shares her inspiring journey through motorsport, bouncing back after a serious accident to becoming a professional racer; Race car engineer Jahee Campbell-Brennan reveals his experience in the industry and the work he is doing to increase diversity with the Motorsport UK board 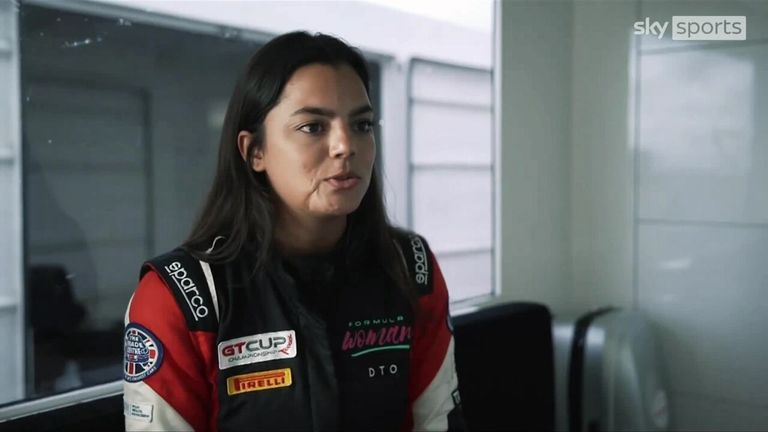 Sara Misir, the first Jamaican Formula Woman racer reveals her incredible story, discussing her unusual route into the sport, facing barriers, and advice to younger generations who want to follow her path.

Misir tells Sky Sports News how her career in motorsport racing started. "It has been a long journey. I started when I was four years old, actually in equestrian. And that was my first passion.

"It was my dream to go to the Olympics and I was training to head to the Pan American Games when I was 16-years-old. Unfortunately, I had a small accident, so I had a small change in sports," said the 24-year-old who spoke to Sky Sports News from Silverstone.

She explains the shift from equestrian to motorsport following her tragic accident when she was 16-years-old and how she came back into sport after a recovery that took half a year. "I was training for the Pan American games and me and my horse were warming up one morning.

"We were doing our normal jumping routine, getting ready for competition. And he tripped over a jump and unfortunately, I was half off, so I jumped off and spooked him.

"He spun around and kicked up and I got kicked in the face by my horse. It was about a six-month recovery. I had dislocated my jaw and my skull was cracked in half."

She adds: "It was a traumatic event to get over. And with that, it was a nine-hour surgery. When I got to the hospital, it was an intense way to go from being a top athlete to just being able to make it down the stairs without having to take a break halfway."

The Formula Woman racer says she had her "jaw wired shut" and was on a liquid diet for five months.

Looking to build a career in professional equestrian, she took a step back from the sport after suffering another injury: "About seven months later I got back on the horse, and I started training again. Unfortunately, I got bucked off and broke my shoulder in half that same year."

Misir shares the moment she was introduced to Motorsport racing by her father: "So it was a lot in one year. And my parents looked at me and said, 'Let's just take a small break and just relax from this for a second.'

"So, my dad with a long history in motorsports, introduced me to go-karting, he said: 'Just try this in the meantime it's competitive, high adrenaline, you will love it.'

"And he was right. I instantly fell in love with it. I started go-karting, but it was a love-hate relationship because you imagine I was training horseback riding since four-years-old and I was training that my whole life."

She adds: "I was making podium finishes, traveling around South America representing Jamaica, and then all of a sudden I came into a brand-new sport at 18-years-old with people that have been racing since they were four or five years old that knew it all already.

"But I had a good support network, who were just pushing me to keep on going. And there were so many times that I wanted to quit.

"But, with that village around me, it really allowed me to get to where I am today."

Misir explained the thrill of pursuing a motorsport career: "It's the mental aspect of racing that I love, your head-to-head with people. It's almost like a chess game where you have to pick where to pass, pick how to do it. You have to look at your opponent, see if they're more aggressive and read how they drive.

"I love it because it doesn't matter if you're male or female. I understand that between men and women you have the genetic advantages as a male.

"However, in a race car, it's a mind game. It's more of who has the experience or who can read the track better or who can perform at peak performance and have that mindfulness and relaxation and focus."

Misir reveals the high-intensity impacts that motorsport has not only on your mind but on your body: "People say, 'you just sit in a car and drive.' And it's so much more than that, I've gone a race day where I've lost almost six pounds.

"I went to my nutritionist, and she told me I burned about 9000 calories in one day and that was without going to the gym.

When asked how she balances her work, social and educational life, she said: "Honestly, that has been another big challenge for me because, in January this year I was in school doing my Master's. I had my routine, it was structured. I would go to Jamaica for the three or four races a year for the Jamaican championship and it was very calm.

"Then I went into Formula Woman, and I realised if I want to throw myself into this dream, I have to do it. All or nothing.

Misir is the first Caribbean motorsport driver in her field. She said: "As the first woman from the Caribbean to come out of that, it's been such an honour because I've had such an impression on people.

"When I go back to Jamaica, so many women, kids, and girls come to me and say: 'I want to race too.'"

"And they see that it's possible. Before there was such a stigma and it seemed impossible. And me being able to open the door and show the younger generation that just because it seems impossible it doesn't mean it is."

"If you always do what you can, you'll never be more than you are."

When asked what diversity in the sport is like, Misir said: "It's already such a hard transition to go as a woman into a male-dominated sport and to have to add diversity to that.

"It just makes it such a bigger obstacle. But I'm really hoping to show that it's not as intimidating as it looks. And yes, the racing world is like a shark tank. It can be, but it's nothing that's impossible. If you put your foot down, it will happen.

"I would have to say Lewis Hamilton is doing such an amazing job. I've always found him such a great person to follow behind and follow his steps. I have always admired him for his modesty, respect for others and gratitude and never losing where he has come from."

Misir shares her ambitions for the future. "I would love to get into the GT3 series and get further into my career, but my focus is mainly on the process right now and just working as hard as I can to make sure I'm learning every day," she adds.

"Start making the right decisions, find out what kind of education you need to get there, it's all about just not giving up."

Jahee Campbell-Brennan is a race car engineer who spoke to Sky Sports News about his journey through the industry from working at Ford to creating his own company.

Campbell-Brennan also mentioned some of the barriers when entering his motorsport career. He said: "So when I realised I wanted to have a bit of a turn in my career and head into motorsport there were several barriers, such as some universities being more favoured by the industry.

"There's always that problem where you're only as good as your CV. So having spent some time in the automotive space and then wanting to work in vehicle dynamics and aerodynamics, which is what I specialise in, there was a lot of times where because it wasn't on my CV, even though I'd done lots of training and preparation for myself, I was kind of running into barriers in that sense."

How did he overcome those barriers?: "That is still a work in progress. I'm quite far from where I want to be in the long term.

"So it's just about getting yourself into the right spaces, having the right conversations. Obviously, with engineering you're never going to know everything.

"So, there's a lot of continued professional development, it's just a sort of a process that I think when you're determined enough, you will keep stepping in the right direction."

"That was an interesting transition. So, I used to contract there and after about four years, it kind of came to an end.

"For a while before that I'd had some thoughts about wanting to make a change but didn't really know how to do it. So, given my experience and having faced a lot of the barriers that people behind me will continue to face, I've not overcome them all, but I've got a good understanding of them and the best solutions for them."

The Lewis Hamilton Commission report published in 2021 stated: "The case for diversifying motorsport is clear and the time for change is now." After helping to work on this report Campbell-Brennan has put together a framework to identify some of the reasons why there is a lack of diversity in motorsport.

"I'm working with Motorsport UK on their racial diversity committee to consult them on the initiatives that would be effective at that level."

He also told Sky Sports News on the importance of representation: "It is a big thing because if you can see someone who looks like you, sounds like you, thinks like you, it can really inspire you to want to be like them."