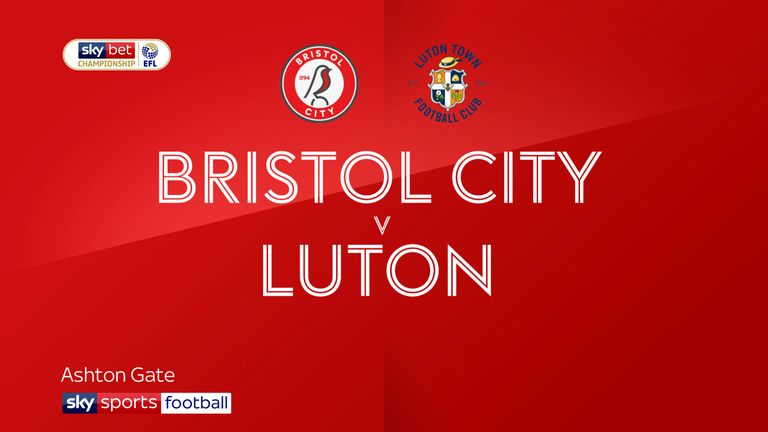 Highlights of the Sky Bet Championship match between Bristol City and Luton Town.

The hosts took a fourth-minute lead when Niclas Eliasson's cross from the left to the far post was met by a falling Marley Watkins, who bundled the ball past James Shea.

Famara Diedhiou doubled the advantage just before the break with a firm side-footed penalty after Jack Hunt had been brought down from behind by Kazenga LuaLua.

Andreas Weimann notched City's third from close range when latching onto a low near-post cross from the right in the 66th minute.

The winning margin would have been bigger but for some fine Shea saves as Luton plunged to their eighth successive away league defeat.

City could have been five up at the interval, making a mockery of the pressure being exerted on head coach Lee Johnson by a section of fans after a run of four losses.

Diedhiou should have done better when heading wide from a Weimann cross in the 16th minute and Shea had to produce a spectacular diving save to keep out Josh Brownhill's 25-yard curler nine minutes later.

The Luton keeper did equally well to smother a Watkins downward header in the 36th minute after another Eliasson cross to the far post.

Brownhill fired over from a 30-yard free-kick with the visitors almost exclusively on the back foot. Their only first-half threat was a 19th-minute header from Matt Pearson from a LuaLua cross that went well wide.

Eliasson, who has been racking up assists in the Championship this season, was a constant threat on the left flank for City and Diedhiou's spot-kick was just reward for his side's dominance.

Luton boss Graeme Jones made a change for the second half, sending on Martin Cranie for right-back Luke Bolton, who had been given a tough time by Eliasson.

It quickly made a difference and Hunt had to clear off the line when City keeper Dan Bentley could only take the pace off a Harry Cornick shot.

Pelly-Ruddock Mpanzu sent a curling effort from distance inches wide with Luton enjoying their best spell of the match.

But City still carried a threat and Shea saved a Diedhiou header from Brownhill's chip into the box before Weimann's goal put the result beyond doubt.

The strike took any remaining stuffing out of Luton, who might have conceded more when pushing extra men forward in the closing stages.

There were few moments of anxiety for Bentley, who was well protected by the central defensive combination of Ashley Williams and Tomas Kalas. But City are likely to face a tougher test at home to Brentford on New Year's Day.

Bristol City's Lee Johnson: "My streaks are getting shorter - only four games this time! Now we can hopefully start another more positive one. The early goal helped settle us and I felt we paid Luton total respect with our performance, which was strong in all departments.

"I'm particularly pleased for Marley Watkins, who suffered when I tried to change the dynamic of the team and has not played as many games as he might have. Today he showed his strengths and gave us something different on the right flank. We had to stop conceding goals and played with one brain as a team."

Luton's Graeme Jones: "The players had put a lot into the Fulham game and today they had nothing left. The senior ones just about coped but it was very hard on our younger lads. We talked so much about City's crossing ability and trying to make sure we had an extra man in the box but got caught out really early in the game.

"I could see we were not coping at the back so changed the shape, which worked OK without us ever having a spark in the final third of the pitch. I didn't get a clear view of the penalty so cannot comment on it but we gave ourselves a mountain to climb by conceding early and didn't have the energy to recover. There were a few home truths delivered at half-time and at the end we had a really honest discussion in the dressing room. The lads are a good bunch and will come again."