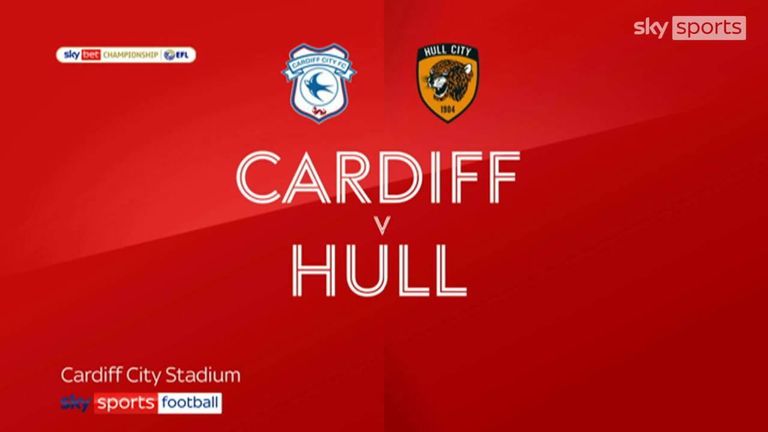 Both teams are at the wrong end of the table and although Cardiff have seemed revived under new manager Steve Morison, the Bluebirds struggled on home turf.

They conceded a poor first-half goal to Lewis-Potter, who finished from close range for an early strike which proved to be the difference between the teams.

A minute's silence was observed before kick-off in memory of former two-time Cardiff manager Frank Burrows after news of his death at the age of 77 was confirmed earlier on Wednesday.

Hull were neat and tidy in possession in the first 10 minutes, while at the other end 20-year-old Cardiff striker Isaak Davies went on a mazy run before he was tackled.

The Tigers went ahead in the 15th minute when George Honeyman swung in a corner from the left and Ryan Longman flicked on. The ball fell to Lewis-Potter in the six-yard box and he beat Leandro Bacuna to head home.

Cardiff thought they had levelled when Will Vaulks' long throw ended up in the back of the net.

Aden Flint and fellow Bluebirds defender Mark McGuinness had tried to make contact, but no-one got a touch so referee Thomas Bramall rightly ruled the goal out.

Hull replaced Callum Elder with the experienced Tom Huddlestone just before half-time as Cardiff were booed off at the break.

Cardiff swapped Joe Ralls for Vaulks for the second period and he immediately found McGuinness from a free-kick, but the defender's weak header was easily saved.

The home side then had two great chances in quick succession from Ryan Giles and Perry Ng crosses.

Kieffer Moore was left frustrated in the middle as he could not make contact.

Ralls had a tame shot blocked and Moore a header saved as Cardiff started to build up a head of steam.

Hull came close to a second when they worked a neat set-piece move which eventually found Josh Magennis at the back post. He could only nod against a post when it looked easier to score.

Cardiff introduced forwards James Collins and Rubin Colwill in search of an equaliser, with Davies and Bacuna making way.

Collins had a goal ruled out for a foul and sent a header against a post in added time.

There were more boos from Cardiff's fans at the full-time whistle.

Cardiff's Steve Morison: "It [booing] must be down to where we are in the league because we've had back-to-back wins. If we are going to get out of this, it is going to take absolutely everybody. Everyone who works at the football club and every fan who comes through the door and watches.

"You see the difference in performance when the fans get right behind us and try and suck the ball towards the goal with their energy and their noise. Unfortunately, when it goes the other way and we get the negative reaction, it has the opposite effect. I'd ask, if we are going to get out of this, we need the fans to be right behind us."

Hull's Grant McCann: "Cardiff is a tough place to come and we knew it was going to be a tough game. I thought defensively we were very good and scored a good goal from a set play. We stuck to our task very well. We knew they had a big centre forward and we would have to be good at stopping crosses. We did that for the majority of the game.

"I'm delighted to have three clean sheets and three wins in a row. We are really, really pleased with the result because Cardiff have been reinvigorated under Steve."