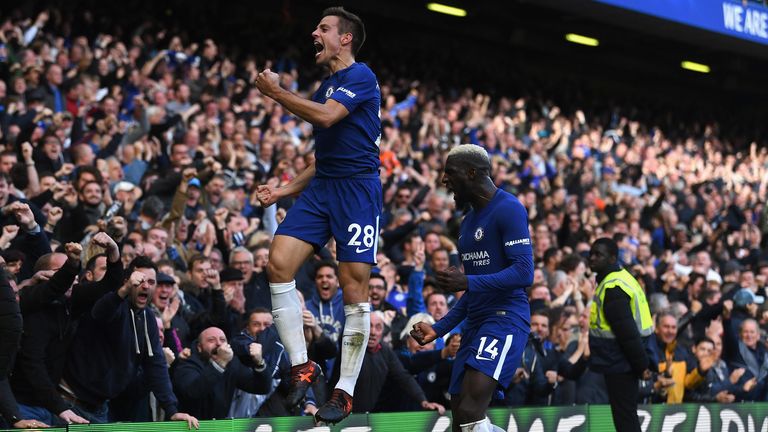 Michy Batshuayi's double capped a resilient Chelsea display as they fought back from 2-1 down to beat Watford 4-2 at Stamford Bridge.

Four minutes into the second half, Richarlison squared for the unmarked Roberto Pereyra to fire beyond Thibaut Courtois (49), but second-half substitute Batshuayi's header made it 2-2 (71).

With three minutes of normal time remaining, Cesar Azpilicueta nodded a third past Heurelho Gomes from Willian's cross (87), before Batshuayi prodded home a fourth to cap the victory and move Chelsea up to fourth.

Man of the match: Michy Batshuayi

Antonio Conte - buoyed by the return of Alvaro Morata - was looking for his side to respond after back-to-back defeats to Manchester City and Crystal Palace, while the Hornets were full of confidence following last week's stoppage-time win over Arsenal.

Marco Silva's side started brightly, but it was Morata who had a sniff inside two minutes when he met Azpilicueta's cross under the challenge of Christian Kabasele, only to be flagged offside.

But Chelsea took advantage at a corner - one dubiously given - as Eden Hazard picked out Pedro on the edge of the area, and the Spaniard curled a delicious first-time effort over the Watford defence, off the left-hand post and past a stunned Gomes.

Antonio Conte makes three changes from the side that lost 2-1 to Crystal Palace - Victor Moses, Willian and Michy Batshuayi were replaced by Antonio Rudiger, Pedro and Alvaro Morata. Marco Silva made a solitary change with Troy Deeney replacing Andre Gray up top.

On the stroke of half-time, Doucoure fired the Hornets level with a superb volley after Luiz failed to clear a long throw into the box.

Richarlison sliced a great opportunity wide from close range in a frenetic start to the second half, following good play from Kiko Femenia.

But just over a minute later the Brazilian atoned for his miss by collecting Troy Deeney's lay-off before squaring for the unmarked Roberto Pereyra, who fired home over the outstretched Courtois.

With 20 minutes to play substitute Batshuayi headed an equaliser from Pedro's cross from the right flank, and Azpilicueta put the hosts ahead three minutes from time, converting Willian's precise delivery.

Batshuayi did get the final say deep into stoppage time, capping a superb fightback by poking his second past Gomes after Miguel Britos' poor pass.

Antonio Conte: "I think our performance was a good performance because it is not simple to concede a goal in the last minute of the first half and to then go down in the first part of the second half.

"I think at that point, our confidence was low. But my players showed me great desire and will to fight to change the situation and final result. I think the performance was good and it was important."

Antonio Conte praises Chelsea’s desire and will to fight after they came from behind to beat Watford 4-2 in the Premier League.

Marco Silva: "It is a really unfair result. It didn't reflect what happened in the match, like our team played and how we came here and controlled for most of the game.

"We created a lot of chances in the first half and started to control the match, and then Chelsea started to play on the counter-attack. We knew before the match that they can play, but we played our game."

Watford boss Marco Silva says his side controlled the game and the scoreline didn't reflect what happened in the match after they lost 4-2 to Chelsea in the Premier League.

Jamie Redknapp: "It is a big result, don't underestimate how big this result is for Chelsea, they needed it badly... You have to credit Chelsea. They had a huge Champions League night on Wednesday and not a lot of time to turn it around and get freshness back in the legs but they showed great character.

"Anyone saying that the players aren't playing for Conte, of course they are, they are right at it. They need a little bit of luck and they had to suffer but it is great for their confidence."

Jamie Redknapp says you cannot underestimate how important Chelsea's win over Watford is for Antonio Conte's side.

Chelsea are unbeaten in their last 13 meetings with Watford in all competitions, winning 10 and drawing three.

Abdoulaye Doucoure has scored with all four of his shots on target in the Premier League this season.

Michy Batshuayi has scored in each of his three Premier League appearances against Watford (four goals in total).

Man of the match - Michy Batshuayi

It was a superb half an hour from the Belgian as his two goals ultimately secured the victory for Chelsea, as he continues to prove his worth and fight Alvaro Morata for the starting spot up front.

He showed pin-point precision with his first header, and his second demonstrated his strength at shaking off defenders as well as his positioning. At 24-years-old, the striker could be starting to hit his best form and give Conte something to really think about in terms of team selection.

Watford take on Stoke City next weekend, while Chelsea welcome Everton to Stamford Bridge in the Carabao Cup fourth round on Wednesday evening.

Pick your team for Tottenham v Liverpool for free to win the guaranteed £5k jackpot.