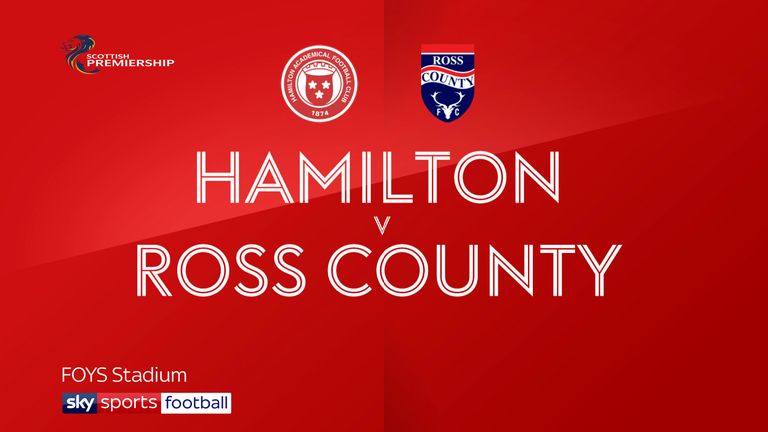 Highlights of the Scottish Premiership match between Hamilton and Ross County.

Billy McKay's late winner made it two wins from two for Ross County as they claimed a 1-0 triumph at Hamilton.

Stuart Kettlewell's men got their Scottish Premiership campaign off to the perfect start with a narrow victory over Motherwell on Monday night.

And they backed it up at the Foys Stadium, with McKay finally breaking Accies' stubborn resistance with his 75th-minute strike to put the Staggies joint top of the table.

Hamilton had proved no match for champions Celtic in their league curtain-raiser last week, crumpling to a 5-1 defeat, but Brian Rice's team looked more comfortable against their Highland guests, with both teams cancelling each other out during a scrappy opening 45 minutes.

Lee Erwin should have fired the Staggies ahead seven minutes in as Harry Paton picked out the unmarked striker at the back post. But former Liverpool youngster Ryan Fulton rescued the hosts with a brave save at point-blank range.

Erwin was wincing again after 20 minutes, but this time in pain as he thudded into the post when he and Shaun Want went chasing a McKay cross.

Thankfully there was no lasting damage and the frontman could continue. Accies created their first opening six minutes later as Callum Smith drove in from the left, forcing Ross Laidlaw down to his right to smother. And the keeper had to be alert again just before the break, parrying away as the same Hamilton player wriggled free to fire a strike at goal.

It was County, however, who stepped things up after the break. It took them a quarter of an hour to wriggle through the midfield log-jam, with Connor Randall teeing up Ross Stewart at the back post - but the scorer of last week's winner against Well could only shake the base of the post.

Accies had their collective hearts in their mouths again when Fulton flapped at a Josh Mullin cross but McKay could not force the loose ball home.

But the keeper was at fault again as McKay clinched the three points with 15 minutes left. Fulton failed to hold an Iain Vigurs cross and this time the ball broke kindly for the Northern Irishman, who buried the ball at the second attempt.

David Moyo had a late chance to rescue a point for Hamilton but his header was straight at Laidlaw.

Hamilton boss Brian Rice: "I'm not going to be too harsh on the goalkeeper. He made some good saves earlier and I actually think David Moyo headed the ball out of his hands. Unfortunately they both went for the same ball and they collided with each other.

"What disappointed me most was our reaction after they went ahead. We were too naive and picked the wrong option too often when we had dangerous players on the park like David Templeton. We need to be more streetwise if we want to start picking up points."

Ross County coach Stuart Kettlewell: "It's a brilliant win on the road. We got two away wins last year and now we've already got one this season. What I don't want to do is be sitting here in months' time looking for my next one.

"I've just said that to the players about trying to push boundaries and see where that will take us. We've got this result today but now we've got two home games and we need to look at how we can piece together some sort of home record."

Hamilton travel to Aberdeen and Ross County host Kilmarnock in the Scottish Premiership on Wednesday at 7.45pm.