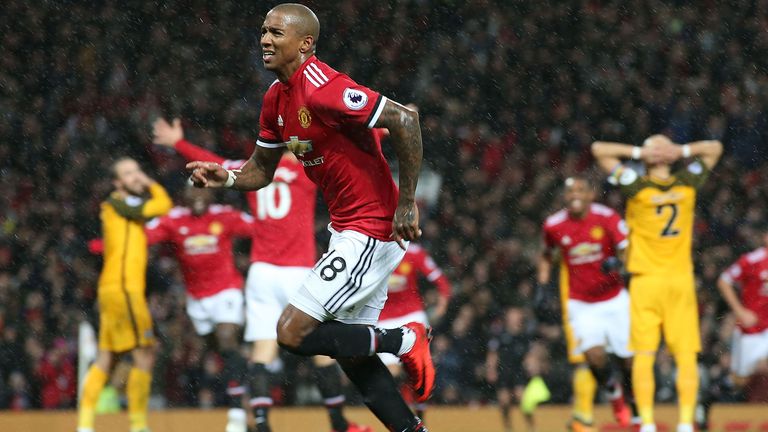 Manchester United were indebted to a heavily fortunate winning goal - credited as a Lewis Dunk own goal - as they scraped past Brighton 1-0 at Old Trafford on Saturday.

The slice of luck came on 66 minutes when Ashley Young's strike from the edge of the box spun off Dunk's boot, which wrong-footed Mathew Ryan and looped into the top corner.

United may have taken maximum points but it was a pretty uninspiring showing against a spirited Brighton outfit, who were tough to break down.

The victory maintains their 100 per cent home record in the Premier League this season and moves them to within five points of Manchester City at the top. City travel to play Huddersfield on Super Sunday.

Brighton arrived at Old Trafford unbeaten in their previous five league games and they started in confident mood, with Anthony Knockaert showing flashes of magic down the right without finding the killer final ball.

United's build-up play lacked tempo as Romelu Lukaku was made to feed off scraps played into the box.

He did get on the end of a piece of quality from Marcus Rashford just before the break, but the Belgian and Paul Pogba were denied by a fantastic double save from Ryan.

The second half continued in the same theme, with Brighton holding firm and restricting United to pot shots from range.

Jose Mourinho called for Zlatan Ibrahimovic midway through the half and the extra body up front started to pin the visitors back. The goal came four minutes after the striker's introduction - but it was more by luck than judgement.

A corner, which was controversially awarded to United, was cleared out to Young, who struck an effort with his left-foot that was heading off target before taking a wicked deflection off Dunk and flying into the opposite corner. Ryan had no chance.

United have only conceded once at home in the Premier League this season and they rarely looked in danger of relinquishing their lead once in front. Shane Duffy headed a half-chance wide late on for Brighton, while Ibrahimovic came close to opening his account for the season after good link-up with Lukaku.

A tough choice with no real standout performers, but Young's attacking play on the left troubled Brighton throughout. Clearly in confident mood, the full-back's decision to take the shot on inevitably lead to United's opening goal. Surely he and Dunk will be pushing for Young to be credited with the goal, which would be his first since May 2016.

"United did find a way, and fair play to them. Brighton players getting back on that coach will be thinking 'how did we not get something from this?' They were just unlucky. So many times the ball just fizzed across the box and nobody was there to get on the end of it. They took the game to United.

"Ibrahimovic comes on and United are a different team. Brighton players just showed him a bit more respect. If United want to win the Premier League, they need seven points from the three big games coming up [away to Watford and Arsenal, and home to Man City]. From what I have seen today, I would be surprised if United won any, even against Watford."

Both teams are back in action on Tuesday when United visit Watford, while Brighton take on rivals Crystal Palace in what will be the first-ever Premier League meeting between the two.