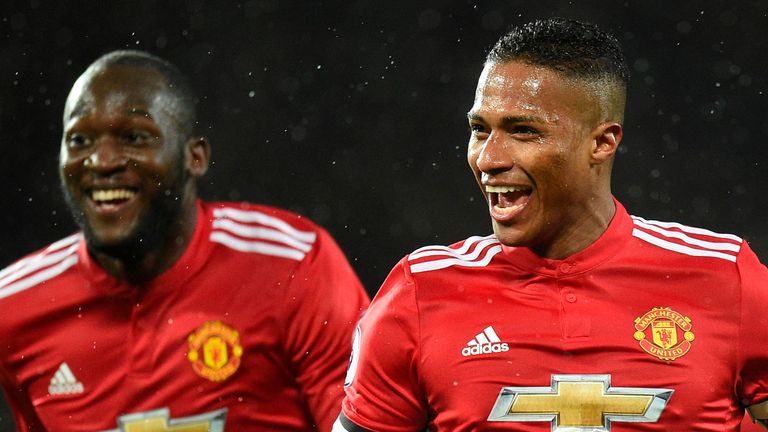 Manchester United closed the gap on runaway league leaders Manchester City with a 3-0 victory over Stoke on Monday Night Football.

City's lead now stands at 12 points after goals from Antonio Valencia, Anthony Martial and Romelu Lukaku swept aside Stoke, who had their new boss Paul Lambert watching on from the stands.

The former Aston Villa and Norwich manager would have taken heart from the performance in the first half where the visitors created multiple chances but either spurned them or were denied by David de Gea, who was keeping his 13th clean sheet of the season.

Man of the Match: Paul Pogba

Stoke remain in the relegation zone, one point from safety, while United move three points above Liverpool and Chelsea in second.

United did not have to wait long for their opener as their first shot resulted in a goal.

United were in front with their first shot on goal on nine minutes when Valencia, back after a month out injured, rifled home an effort from just inside the area with left-foot.

Stoke responded well, but Stephen Ireland fired two opportunities wide, the second after he had been left all alone from 15 yards out.

Jose Mourinho made three changes from their 2-0 victory over Everton (last Premier League game) with Chris Smalling, Antonio Valencia and Romelu Lukaku all returning. Henrik Mkhitaryan was left out of the squad. Stoke made five changes from their Premier League home defeat against Newcastle. Moritz Bauer, Bruno Martins-Indi, Josh Tymon, Stephen Ireland and Darren Fletcher all got the nod.

Eric Maxim Choupo-Moting then latched onto a loose ball in the box but his shot was blocked behind by Phil Jones.

Martial made Stoke pay when he added a second seven minutes before the break.

Paul Pogba provided the assist with a crisp pass that was swept home by Martial from 20 yards.

David De Gea had to be alert to deny Xherdan Shaqiri just before half-time but that was the last of the Stoke threat as United bossed the second half.

A third goal came and wrapped up the points 18 minutes from time.

Martial's pass was controlled by Lukaku, who held off two defenders and fired home a powerful effort.

Pogba bossed this game, grabbing two assists which maintained his high level of form since returning from suspension.

No player in the league has made as many assists (9) as the explosive midfielder.

The Frenchman is also now unbeaten in his last 35 Premier League appearances (W21 D13) since losing 4-0 to Chelsea back in 2016.

"Obviously, the City game. My view of him is that he has the confidence, the arrogance, the personality to play for United. He wants the ball and they are far better team when he is in there."

United face a trip to Turf Moor to take on Burnley on Saturday while Paul Lambert's first game in charge for Stoke will be against Huddersfield.