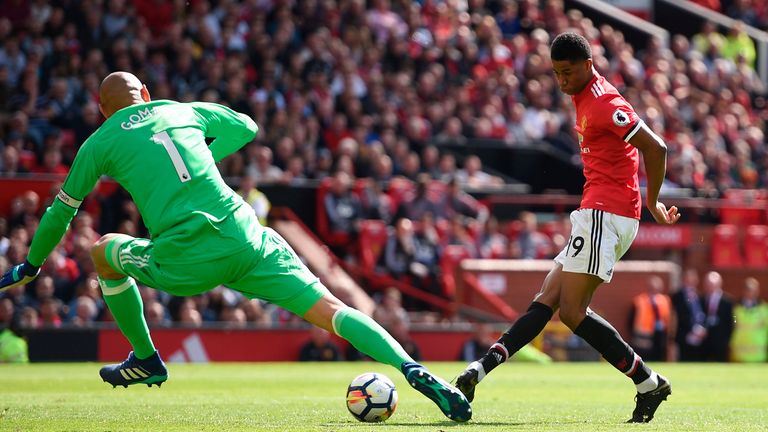 Carrick was instrumental in United's opener in the 34th minute, as he played the ball over the top for Juan Mata, who then laid it off for Rashford to score his seventh league goal of the season.

Watford should have levelled on the stroke of half-time through Richarlison, but the Brazilian headed too close to United goalkeeper Sergio Romero from point-blank range.

Both teams had very little to play for, with United having already made sure of their best Premier League finish in five years following the 0-0 draw with West Ham on Thursday, meaning the second half had a real end of season feel to it. The defeat means Watford dropped a place and finish 14th.

Man of the match: Michael Carrick

There was no Anthony Martial in the United squad, with the club insisting the France international picked up a late injury, and the much-changed hosts were laboured in his absence in the opening exchanges.

It took until the 34th minute for the game's first meaningful chance, which was converted by Rashford, after Mata had laid the ball across. The pass to play into Mata from Carrick gave the Old Trafford masses a reminder of what they will be missing next season.

Watford remained undeterred, though, and should have levelled 10 minutes later, but Richarlison could only head Daryl Janmaat's cross too close to Romero, who flung out an arm to make a smart stop.

After Mourinho stated that Anthony Martial would be starting in his pre-match press conference, the France international was conspicuous by his absence as he did not even make the squad. Are his days at Old Trafford numbered? Nine changes in all for United, with only Alexis Sanchez and Scott McTominay retaining their places from the draw at West Ham. David de Gea was rested. Heurelho Gomes, Gerard Deulofeu and Richarlison came in for Orestis Karnezis, Etienne Capoue and Troy Deeney for Watford. Nathaniel Chalobah returned to the bench after eight months sidelined by injury.

After the break, the tempo faded, as the long season seemed to have taken its toll. Mata did have the ball in the net again, but he was denied by the offside flag.

Carrick's final farewell came late in the match, as he was substituted to rapturous applause, and will now undertake a coaching role at the club.

Watford did press in the dying moments, but could not find a way past Romero as United saw out the season with another win, finishing with 81 points.

Marcus Rashford got an early goal on his return to the starting line up, but he was otherwise quiet up front for United. Ashley Young, playing in a more advanced role, failed to deliver any of his trademark pinpoint crosses.

Man of the match - Michael Carrick

He just had to be involved in the winner, spraying one of his trademark passes over the top of the defence for Mata to set up Rashford. On an afternoon of little other quality, Carrick continually picked out his man as he rolled back the years on his Old Trafford farewell.

Watford's season is done and dusted, but United have the small matter of next weekend's FA Cup final against Chelsea to come, as they look to end the season with some silverware.