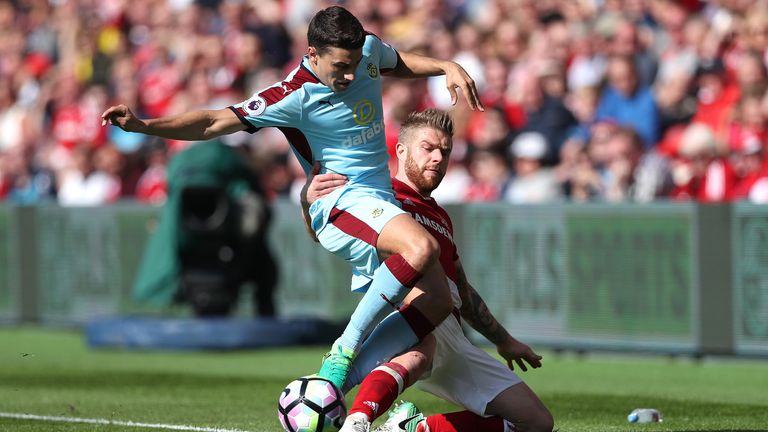 Middlesbrough edged a step closer to relinquishing their Premier League status on Saturday as they played out a goalless draw with Burnley at the Riverside.

Despite a spirited start on a scorching day on Teeside, Steve Agnew's men failed to find a way through the sturdy Burnley backline and kickstart what was already looking like a doomed survival attempt.

Watch every drive, chip and putt from The Masters in the battle for the Green Jacket. From £6.99.

Boro's last league win was on December 17 but though the early balls that found Rudy Gestede seems promising, they almost went behind inside 15 minutes when Robbie Brady's free-kick skimmed the top of the bar.

Neither side had an attempt on target in the first half, and the second period saw the best of the chances for both sides; Brady swept wide following flowing build-up play, while Alvaro Negredo came off the bench to see an overhead kick expertly kept out by Tom Heaton.

Agnew made four changes to the side that lost to Hull on Wednesday evening, Negredo dropping to the bench, while Steven Defour missed out through injury for the Clarets.

Despite their comfortable return to the Premier League this season, Burnley arrived on Teeside as one of only two teams in the top four divisions yet to win an away game this season - the other being relegated Championship side Rotherham.

It was relatively laboured start from both sides at the Riverside but Boro who emerged as the favourites to draw blood first.

Stewart Downing aimed a cross at Antonio Barragan, though the winger ducked out under the challenge of Ben Mee at the vital moment.

It became clear that forward balls into the path of Gestede would be the favoured tactic, and though numerous deliveries from Adam Forshaw, Adam Clayton and Barragan breached Burnley's defensive lines, each lacked accuracy.

Brady's first goal for Sean Dyche's men was a stunning free-kick against Chelsea in February and he was mere inches away from repeating that feat after 15 minutes. Victor Valdes was at full-stretch to try and tip the ball away, but it was the top of the crossbar that spared his blushes, however.

His side had the next opportunity when George Boyd intercepted a cross from Lowton, turned and released a shot. The winger perhaps had too little time to aim his shot correctly as he sliced wide ten yards from goal.

That all changed after the break. It was a cagey start once again, but on 57 minutes Brady spurned what was probably Burnley's best chance of the game. Stephen Ward's cross was dummied by Ashley Barnes, leaving Brady the task of sweeping home the loose ball, but he watched as it curled wide of the mark.

Still Boro came forward and they were denied what could have been a season-defining decision five minutes from time; the tenacious former Burnley loanee Patrick Bamford latched onto a long ball out of defence but was felled by Michael Keane on his way. Martin Atkinson booked the defender, his tame decision swayed by the fact he had slipped as he geared up to make the challenge.

But they received no such luck and had to settle for a stalemate in the spring sunshine. Boro's winless run stretches to 14 and the threat of relegation is now all-too close.

Man of the match: Matt Lowton

The battle for The Masters is hotter than ever before. Watch every drive, chip and putt from Augusta in the battle for the coveted Green Jacket on NOW TV. Watch live from just £6.99.