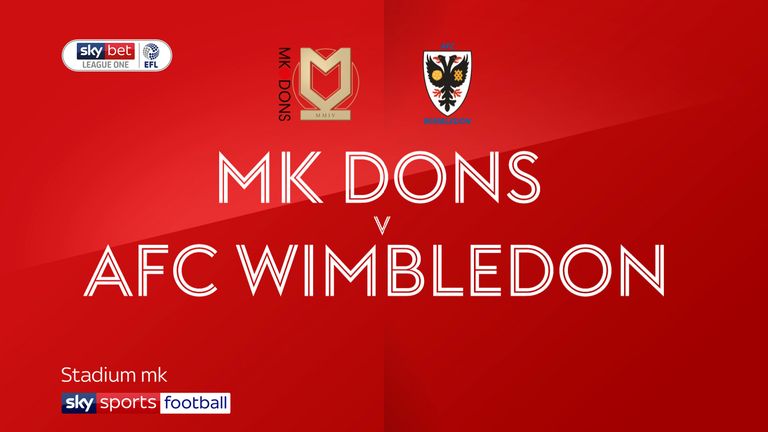 Highlights of the Sky Bet League One match between MK Dons and AFC Wimbledon.

MK Dons held on to beat rivals AFC Wimbledon 2-1 in Sky Bet League One on Saturday.

Substitute Marcus Forss then got AFC Wimbledon back into the game after 83 minutes, but it wasn't enough and they remain in the relegation zone without a win this season.

There was a notable attendee at Stadium MK as Dele Alli - left out of the most recent England squad due to an injury that has limited his start to the season - took advantage of a rare Saturday off to watch his former side. And he would have been delighted to see another MK academy graduate open the scoring.

Both sides were in Leasing.com Trophy action in midweek. Paul Tisdale brought Alex Gilbey and Rhys Healey back into his MK Dons side, while AFC Wimbledon made eight changes.

Nombe, just 20, was handed his first league start by Paul Tisdale after three goals in cup competitions this season, including two at Stevenage in the Leasing.com Trophy in midweek, and he showed off his potential after 10 minutes, latching onto a fine ball from Healey before holding off his marker and slotting home, via a ricochet off both posts.

AFC Wimbledon had third-choice goalkeeper Joe McDonnell between the sticks, and once again he was beaten after 26 minutes. This time it was Healey who took centre stage, as he made space for himself on the edge of the box before driving a low shot into the bottom corner.

Wally Downes reacted at half-time with a double change, throwing on Michael Folivi and Max Sanders, but it took until 61 minutes for them to carve out a real opportunity. Luke O'Neill's free-kick found its way to Paul Kalambayi at the back stick, but his acrobatic effort was kept out well by Lee Nicholls. AFC Wimbledon pushed forward again swiftly as the ball found an unmarked Kwesi Appiah six yards out, but he blazed over.

Downes' third change did get them back into the game. Forss scored his first goal for the club since arriving on loan from Brentford, rising at the far post to head in, but it wasn't enough to trigger a late rally as MK Dons held on.

Man of the match - Rhys Healey

A fine performance from the MK Dons frontman. He provided a superb assist for Nombe's opener and then took his own goal brilliantly, which was his third of the season.

Paul Tisdale: "This was a week's work and in football a week is a long time. We had some good craft about us and it was a good win. We made it difficult for ourselves in the last five or 10 minutes and it became a little edgy.

"I'm really pleased for everybody because I know this means a lot to a lot of people and for us it's getting the three points too - we needed to get them because we've been unsettled. We started really brightly in the second half but we let one or two things go. We spoke about being tough, we can't do everything yet, but one thing at a time - it was good enough."

"We missed chances, we had more shots than them and more shots on target, and if we had our chances away we would have been fine."

Both sides are back in Sky Bet League One action at 3pm next Saturday. AFC Wimbledon host Shrewsbury and MK Dons head to Blackpool.