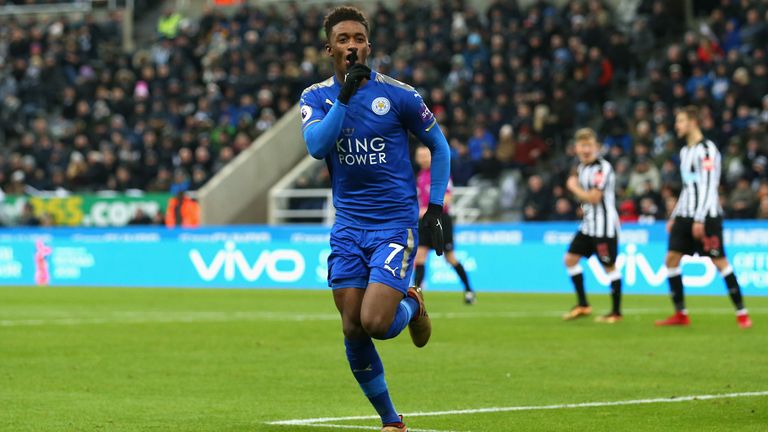 Joselu, brought back into the starting line-up by Rafa Benitez, only needed four minutes to justify his selection, as he stroked the ball home to give Newcastle a fourth minute lead, before Riyad Mahrez fired home from 25 yards to level 16 minutes later.

After the break, Leicester continued in the ascendancy, and took the lead for the first time in the match on the hour mark after Demarai Gray's strike was deflected home - Gray's third goal in seven under Claude Puel.

Dwight Gayle levelled things up, with the aid of another deflection in the 73rd minute, but Newcastle were carved open once more late on, with Perez's 86th minute own goal, as he tried to prevent Shinji Okazaki scoring, ensuring Newcastle slipped to a sixth defeat in seven, which leaves them just two points above the relegation zone in 16th, while Leicester's improvement under Puel continued as they climbed to eighth in the Premier League table with victory.

Man of the match: Demarai Gray

The game started at a ferocious pace, with the hosts in front inside four minutes. An Isaac Hayden pass found Gayle down the channel. The Newcastle forward raced to the byline, before fooling the Leicester backline with a clever pull back for Joselu, who had the simple task of sweeping his side into the lead.

Gayle then nearly netted a quick-fire second after great work from Mikel Merino to win the ball back, but he fired just wide from a good position.

Leicester soon found their rhythm and started to cause problems. Firstly, Gray curled a brilliant effort just past the post, before Mahrez levelled with a fine strike from distance. The Algeria international moved the ball quickly onto his left, powered a strike goalwards, which beat the despairing dive from Karl Darlow in the home goal, to find the net. The Newcastle stopper may feel a little disappointed he didn't keep that out, though, as he got his hands to it.

Three changes to the Newcastle side that were beaten at Chelsea last time out. There was no place for Chancel Mbemba in the matchday squad, DeAndre Yedlin came in . Joselu was given a starting spot, as was Isaac Hayden. The Foxes were unsurprisingly unchanged from their win over Burnley last weekend.

Darlow then saved well from Marc Albrighton, before Leicester had a strong case for a penalty turned down, with DeAndre Yedlin adjudged to have got the ball when challenging Jamie Vardy, but the hosts survived to remain level at the break.

In the second half, Leicester continued to control proceedings, and were in front on the hour mark as Newcastle's soft centre was again exposed. Mahrez's long ball was brilliantly cushioned into the path of Gray, whose strike was deflected past Darlow.

Darlow then had to be alert to save from Mahrez as Leicester continued to dominate, but, out of the blue, Newcastle found an equaliser, as Gayle's drilled effort took a huge defection off Harry Maguire, leaving Kasper Schmeichel with no chance as the ball found the bottom corner.

The tide seemed to have turned, as Gayle then went close to another, but a swift counter saw the visitors snatch all three points. A long ball over the top sent Vardy in the clear, he was forced wide, but managed to twist and square the ball for the onrushing Okazaki, who looked certain to score, before Perez finished it for him on the slide. An unfortunate way to lose, but the result was fair as Newcastle again were well below the required standard.

Claude Puel has won three consecutive Premier League games for the first time as a manager - the Frenchman last won three league matches in a row as Nice manager in March 2016.

Newcastle have dropped 11 points from winning positions in the Premier League this term; the most of any team in the competition.

Rafa Benitez's side are winless in seven Premier League games (W0 D1 L6) and have conceded 15 goals across their last five matches in the competition (an average of three per game).

Man of the match - Demarai Gray

Had double the shots of any teammate. Looks like a different player under Puel. Exudes confidence every time he is on the attack, and is not afraid to have a strike from anywhere. Very unlucky with a first-half effort.

Another home match for Newcastle comes next on Wednesday, and it is another team who have improved a great deal recently in the form of Everton, while Leicester travel south to take on Southampton.