Mexican winger Hirving 'Chucky' Lozano could be on his on his way to Manchester City. Here, we profile the exciting attacking midfielder.

According to Sky sources, City are closing in on another summer acquisition, with a view to loaning the 21-year-old out to get first-team experience.

Lozano, known as 'Chucky', has been linked with Manchester United in the past but it appears City are now favourites to land him, although any deal is still some way short of being concluded.

Man City close in on 'Chucky'

The player himself has admitted he fancies the move to join Pep Guardiola's revolution.

"The one I would like most is Manchester," Lozano said after his country's recent win over Honduras.

"I like this club a lot and it's a very important club. I've got to take it calmly and speak about it all with the [Pachuca] directors."

But what's the story? Who is Lozano? We take a closer look...

Lozano grew up in Mexico City but he was snapped up by Pachuca, which is 40 miles from his hometown. After a spell in the wilderness of Mexican football, the club have grown into a dominant domestic force, winning the Mexican league title three times in the last 10 years.

Pachuca have provided the perfect environment for Lozano to develop. After making his debut in 2014, he has gone onto make 69 senior league appearances and scored 22 goals for the club, who won the Mexican league title (Clausura) in 2016, with Lozano at the forefront.

Two months ago, Pachuca won the CONCACAF Champions League by defeating fellow Mexican club Tigres UANL in the finals, with Lozano winning the Golden Boot as the competition's top scorer with eight goals, as well as the Best Young Player Award.

The 21-year-old received his first senior call-up to the national team in February 2016 and has since made 16 appearances, scoring twice.

He made four appearances for Mexico at the recent Copa America tournament, including an inspired 27-minute cameo against Jamaica, where he provided a classy assist for Oribe Peralta to score the second goal in a 2-0 win.

Both like to run with the ball and attack defenders with pace and power. His speed and intelligence with the ball means he's a bit of an assist king. This was on show during one match for Mexico U20s in 2016 where he scored two but also created four goals in a 9-1 win over Cuba.

Lozano is predominantly right-footed but in keeping with the modern winger prefers to play off the left-wing and cut in on his stronger foot. Such is his quality, he can play anywhere across the forward line and has played centrally for his club side when required.

Where would Lozano fit in at City?

Reports from Univision in Mexico suggest that any potential deal will see the striker go on loan to PSV Eindhoven, where he will stay for two seasons. 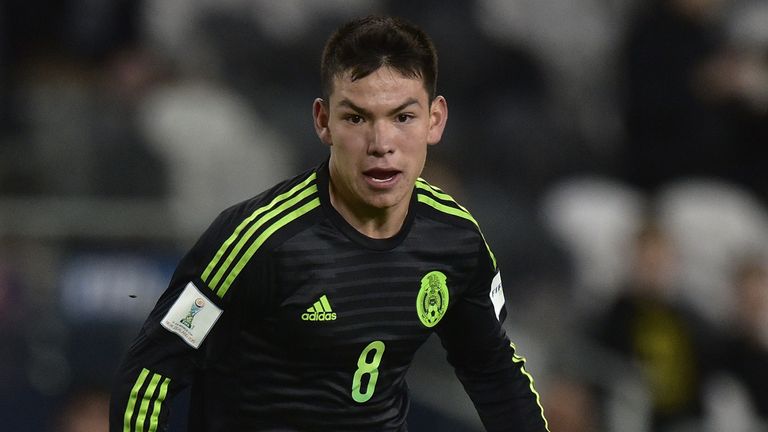 His speed and ability to go past [opponents] will take him far.

Eventually, it is thought that the trickster has the energy and vigour to be deployed as a wide forward.

Lozano's nickame is 'Chucky'. He picked up the tag due to his liking for jumping out from under beds to surprise roommates on away trips.

What have they said?

Lozano has the potential to go far, according to his Mexico coach Juan Carlos Osorio.

"His speed and ability to go past [opponents] will take him far," he said. "Lozano has a great desire to learn with the national team. His strength is that he is a very low-key, low profile, very down to earth [person] and I think will go very far.

"Not only is he a very good player with the potential to be an outstanding player, he is also a very good human being."

Carlos Mourino, the La Liga club's president, said: "We'd love to [sign Lozano], but it is difficult to combine everything so that it comes off.

"We believe that he's an important young talent, but we have to evaluate absolutely everything and that's what we are doing."