Arsene Wenger has praised Olivier Giroud after his winner against Leicester City on Friday night and confirmed the striker wants to stay at the club this season.

Giroud was once again a substitute as Arsenal kicked off the new Premier League season by coming from behind to beat Leicester 4-3 at the Emirates.

However, the France international came off the bench with a quarter of the game left to play to head home the Gunners' 85th-minute winner.

And Wenger expressed his delight for his compatriot, who had been linked with a return home to join Marseille in recent days.

"I love the man and the player because he is a fantastic guy, he is committed and loves the club and he does not want to leave and I am happy that he wants to stay," said Wenger 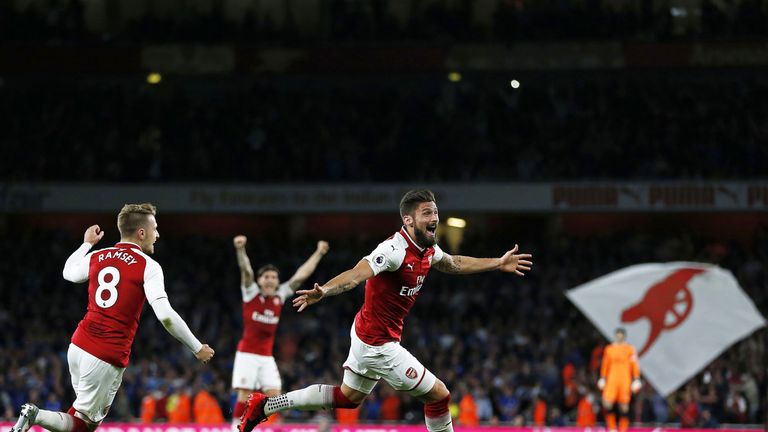 "But at some stage I opened the door for him because I knew that I had many strikers, but he is really loved here and we love him and in the end he decided to stay."

Despite Giroud's late winner, however, there were still a number of concerns for Wenger, especially at the back after his side conceded three times at home.

"The first goal was from a short corner and we were not focused enough and on the second goal we lost the ball in the build-up and got punished again," he said.

"We lacked a bit of experience and we had many experienced defenders out tonight like Per Mertesacker, Shkodran Mustafi and Laurent Koscielny, so overall we looked much more solid defensively at the end of the season."

One positive for the Gunners was that they won without forward Alexis Sanchez after the Chilean missed the opening game of the campaign through injury.

"Of course we have top-quality strikers coming back," he said. "Aaron Ramsey - I did not want to take a chance with him tonight because he got injured in the first game of last season against Liverpool. So overall I am pleased that he could come on today and not be injured."

However, Wenger refused to be drawn on whether this win was proof his team could make a sustained challenge for the Premier League this season.

"I do not know how good everybody will be, that is the problem now in the league," he said. "And on top of that you have six or seven teams who say they can win the league, which makes it interesting."