Diego Costa has finally been unveiled as an Atletico Madrid player, three months after agreeing to leave Chelsea in a £57m deal.

Costa was presented alongside fellow new signing Vitolo ahead of an open training session in front of 25,000 fans at the Wanda Metropolitano on Sunday to bring the curtain down on 2017.

The Spain international is eager to begin his second spell at Atletico after being confined to the club's training ground since September, shackled by the club's ban on registering new players.

"I've waited a long time for this day, I've been working hard and training hard but there's nothing else to do, I need to play, I'm tired of training," Costa told a news conference.

"I want to thank the club for all the hard work they did to be able to bring me back. From the heart, thank you."

Costa, who fired Atletico to a first league title in 18 years in 2014, agreed a return to the club for nearly double the price he left for when joining Chelsea just two months after that success.

Atletico are currently second in La Liga but Costa's return cannot come soon enough for Diego Simeone's side, who are nine points adrift of leaders Barcelona and had their confidence rocked by elimination from the Champions League group stage. 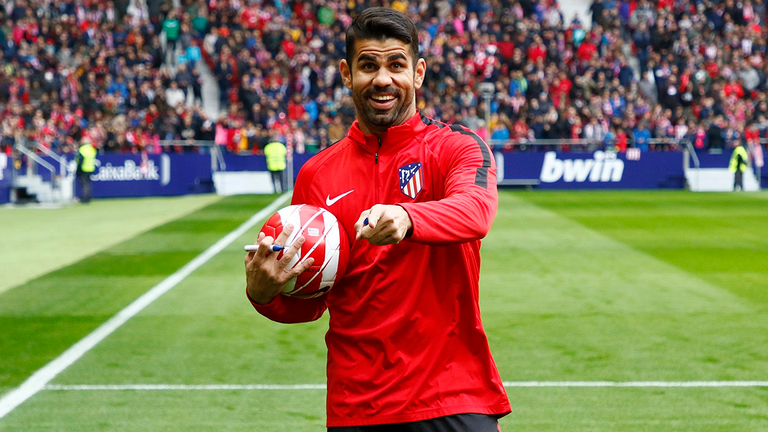 I want to thank the club for all the hard work they did to be able to bring me back. From the heart, thank you.

"I'm in much better shape than when I arrived, I've prepared well and worked hard and I'm ready to help the team and score goals," the 29-year-old added.

Atletico's ban on registering new players due to the illegal transfer of minors expires on Monday, meaning Costa could make his debut against Lleida Esportiu in the Copa del Rey on Wednesday, with his first league appearance set for Saturday at home to Getafe.

He was officially presented alongside fellow Spain team-mate Vitolo, who signed from Sevilla in July for £35.5m.