Eden Hazard is enjoying playing football under new Chelsea boss Maurizio Sarri and says he is happy at Stamford Bridge - for now.

The 27-year-old playmaker has begun the season in sparkling form and scored his second of the campaign in Saturday's 2-0 win over Bournemouth which gave Chelsea four wins from four Premier League games.

Hazard was repeatedly linked with Real Madrid in the summer and hinted - after helping Belgium to third place at the World Cup - that his preference was to leave Chelsea.

No move materialised and Hazard, now in his seventh season at Stamford Bridge, is enjoying new head coach Sarri's style of football.

"I like to have the ball. Not in my own half, but in the last 30 metres," Hazard told Chelsea TV.

"I like this type of game. It's completely different than Antonio Conte or (Jose) Mourinho before.

Hazard's contract expires in 2020 and the offer of an extension has not been taken up so far, but he is showing no signs of unhappiness.

Hazard was a substitute in Chelsea's first two matches of the season, but was instrumental in the win over Arsenal and then started and scored against Newcastle and the Cherries.

He understood his slow reintroduction to club football and appears happy just to wait and see on his long-term future.

Asked how he is, Hazard said: "Good. You can see on the pitch. 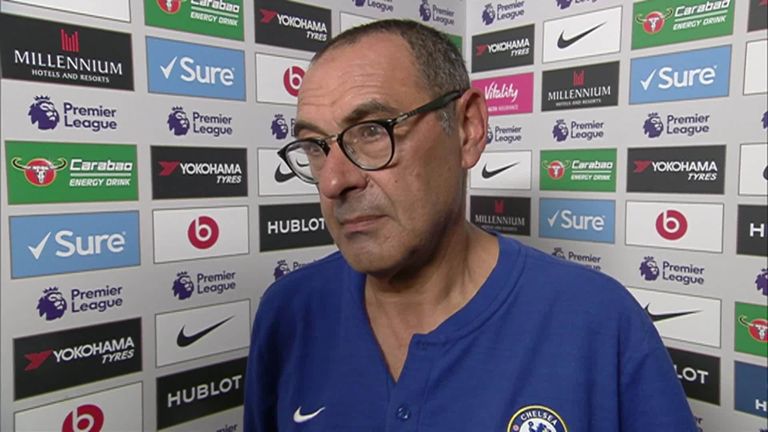 Chelsea boss Maurizio Sarri was pleased with his side's performance, in particular, Eden Hazard's influence after their 2-0 win over Bournemouth

The arrivals of Jorginho, who followed Sarri from Napoli, and Mateo Kovacic, on loan from Real Madrid, have given Chelsea a different dimension, Hazard says.

Hazard added: "It's not so different (from the past). The big difference is we bring two players - Jorginho and (Mateo) Kovacic - and they are completely different.

"We just try to keep the ball more often and then when we have a chance to score, we need to score.

"But when we have more ball we can be more dangerous.

"We're playing good football, so we enjoy. I want to keep this momentum."