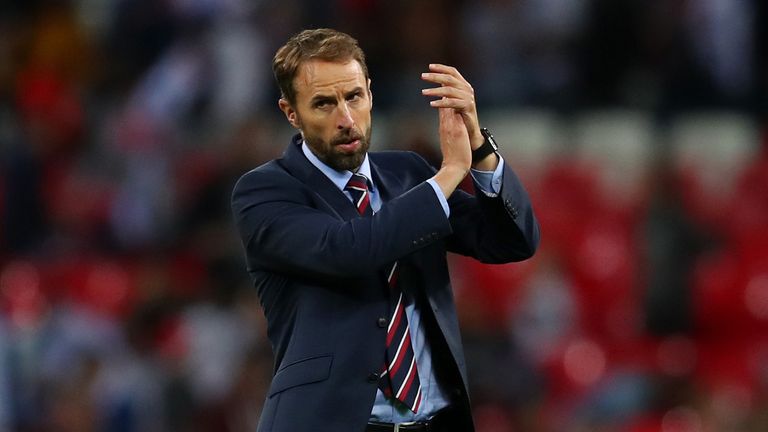 Danny Murphy feels that the FA should wait to see how England do at the 2020 European Championships before looking to extend Gareth Southgate’s contract.

Danny Murphy believes it would be "ridiculous" if the FA extends Gareth Southgate's contract until after the 2022 World Cup.

Sky Sports News understands negotiations are advancing between the 48-year-old and the FA over improved terms that would hand him a significant pay-rise and extend his reign to include the Qatar World Cup.

FA bosses are keen to reward Southgate for guiding England to the semi-finals in Russia, but former England midfielder Murphy believes no international manager should have a contract that lasts that long.

"What happens in international management is the same cycle that always happens," he told The Debate.

"We get hopeful, everything is fine and then we fail and you have to pay someone off because you've given them a stupidly long contract.

If you lose every game at the Euros and don't get out of the group then he is gone. The fans won't have it.

"I, as a football person, see the logic in giving it him until 2022 but the reality is that it's ridiculous to do that because if he fails he is going to go and the FA have to spend millions.

"Why not just do it the logical way?"

Murphy believes Southgate and assistant Steve Holland will stay loyal to The FA and would not be persuaded to move to a club side before Euro 2020.

And he insists there will always be plenty of candidates for the role without the need to tie one man down to an expensive long-term deal.

"It's not just Gareth, it's any manager," he added.

"This is a man who says it's the biggest honour of his life and every man who gets the job says the same thing.

"You're never going to be short of candidates for the England job. We've got lots of good coaches.

"I think Gareth would be happy to wait until the Euros and wouldn't jump ship if someone came in and said 'do you want to do this club job?'

"It doesn't matter what message this sends out. If you lose every game at the Euros and don't get out of the group then he is gone. The fans won't have it.

"We've thrown away millions on Fabio Capello and Sven-Goran Eriksson and the list goes on. You can't keep making the same mistake.

"Gareth is doing a great job. I like him, things are going well and I don't think we'll lose every game.

"But how can you give a contract to 2022 when if we don't do well at the Euros, everyone will say 'get him out' and they will have to pay him off."