Liverpool could just be Jadon Sancho's next club - Kaveh Solhekol, The Insider

In his latest weekly column, Sky Sports News reporter Kaveh Solhekol gives his thoughts on Jadon Sancho's next club, Moussa Dembele's future, what has happened at Manchester City and other matters...

Jadon Sancho - my money is on Anfield

It is difficult to say where Jadon Sancho will be playing next season because so many clubs want him but if I was a betting man my money would be on Liverpool.

Sancho is one of Jurgen Klopp's top summer targets and he would find it hard to turn down a move to Anfield if Liverpool end up winning the Champions League as well as the Premier League this season.

Manchester United are confident they can get Sancho in the summer, but they need to qualify for the Champions League first and they don't have the Klopp factor.

If he was to move to Liverpool, Sancho would be joining a club who are likely to dominate English football for the foreseeable future.

Sancho will make up his mind about where he plays next at the end of this season. Borussia Dortmund will let him go for £120m.

Bayern Munich would love to keep him in the Bundesliga, but he is more likely to be playing for a German manager rather than a German club next season. 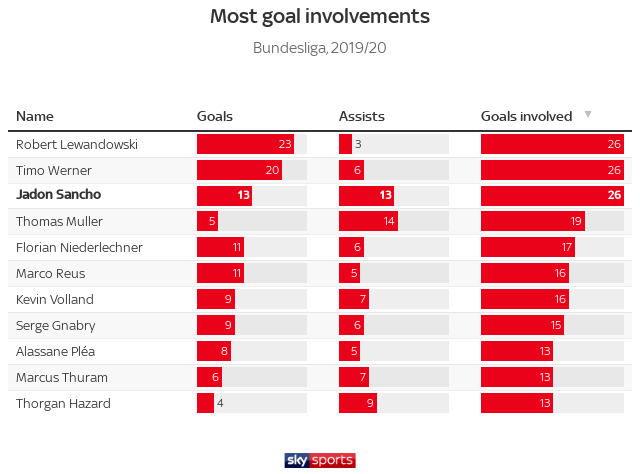 Manchester United will sign a striker in the summer and Lyon's Moussa Dembele wants to move to Old Trafford.

Dembele will be allowed to leave Lyon at the end of the season and he wants to return to England where he started his career at Fulham.

Dembele has scored 13 times this season and injuries to key players meant Lyon were unwilling to let him leave in January.

They also wanted to keep him because they are still in the Champions League and face Juventus next Wednesday.

Lyon president Jean-Michel Aulas will let Dembele leave in the summer but he will have to settle for less than his €100m (£83m) asking price.

Chelsea tried to sign Dembele last month and were willing to pay up to £40m and he has also been watched by Manchester City, Newcastle and West Ham.

Tottenham tried to sign him when he was at Celtic and they are looking for a striker in the summer.

Dembele is keeping his options open but playing for a Manchester United side who have qualified for the Champions League would be a dream move.

A lot has been said and written about Manchester City's European ban but not enough of it has been about Rui Pinto.

He is the Portuguese football fan whose hacking brought about City's downfall.

Without him, Der Spiegel would not have had their story about how City were allegedly gaming the system and, without that story, UEFA would not have re-opened their investigation into City's non-compliance with Financial Fair Play rules.

Some people see Pinto as a hero; a whistleblower who has shone a light on the greed and corruption at the heart of European football by stealing 88 million documents.

Others think he is a criminal who is getting what he deserves from the Portuguese courts.

Pinto is in prison in Lisbon facing multiple charges of hacking, sabotage and fraud.

He is likely to spend more time in prison than City do out of the Champions League.

Guirassy will be in demand this summer

It looks like Premier League clubs missed a trick by not signing Serhou Guirassy last month.

West Ham and Bournemouth were interested and Brighton offered a £500,000 loan fee and a £14.5m option to buy for the Amiens striker.

No deal was done and since the window closed Guirassy has scored three times in four games.

That's no mean feat considering Amiens are 19th in Ligue 1 and two of his goals were in Saturday's 4-4 draw with Paris Saint-Germain.

That performance was watched by scouts from Premier League clubs including Tottenham. They are looking for a back-up striker and interested clubs are being told that Grassy will be available for about £18m in the summer.

Frank Lampard has also been told about Guirassy's qualities and Chelsea are watching him closely.

I Don't Want To Go To Chelsea - The VAR version

Elvis Costello & The Attractions released I Don't Want To Go To Chelsea more than 40 years ago, back in 1978.

The meaning of the song is not clear but I've always thought it was about an outsider who could see right through the fakes and phonies strutting up and down the Kings Road.

Fast forward 42 years and if that song came out today you would assume it was written by a Chelsea fan about VAR.

In any other season, Manchester United's 2-0 win at Chelsea on Monday would have been a 2-2 draw.

One Chelsea fan, @Greenaway56, summed up what many were feeling: "Unemployment, illness, marriage break up and relegation over the last 50 years never stopped me from going to Chelsea, but VAR will."