Jamie Redknapp: Why Kevin De Bruyne is my Player of the Season

Kevin De Bruyne is the best passer in Premier League history, and deserves to win Player of the Season, insists Jamie Redknapp.

Though his Manchester City side stumbled in the Premier League, sitting 25 points behind leaders Liverpool before football was put on hold due to coronavirus, the Belgian was the champions' outstanding performer, registering 16 assists.

If the Premier League was to resume, he would need just four assists to match Thierry Henry's record of 20 in the 2002/03 season, and Redknapp believes although Jordan Henderson and Sadio Mane have been key for table-topping Liverpool, De Bruyne would be his pick for the individual award.

Speaking on the Sky Sports Football player of the season podcast, Redknapp said: "There have been some outstanding performances this season. But Kevin De Bruyne has been absolutely outstanding.

"His statistics this year have been his best ever, and if the rest of the City side had been as consistent as him, they'd probably be in contention with Liverpool.

"For me, De Bruyne's assists and goals really make him stand out for me. His numbers are just far and away better than anyone else's. If it does go to somebody outside of the Liverpool team, he is the only person you can really mention, because he has been that good, and has shone like a star in that City side at the moment.

"I would say he's the best Premier League passer I've seen, and that's including David Beckham, Paul Scholes, all of them, because he has the variation of passing.

"If we finish the season, he will break Thierry Henry's assist record 20."

De Bruyne has enjoyed one of his best seasons at City this term, picking up nine Sky Sports Man of the Match awards, more than any of his team-mates. Though he may not end up a Premier League champion this season, 13 of the 27 previous winners of the PFA Player of the Year award have not been title winners.

Redknapp, who has been an admirer of the 28-year-old since his days with Genk, says De Bruyne playing as a winger previously has aided him in his passing range.

"As a young player, I remember seeing him play for Genk, in a Champions League game against Chelsea before he signed for them, and he played wide. I think that helped him a lot because he learned how to cross the ball, and where forwards want it.

"Obviously, going to play in Germany and then Manchester City, he became more of a central player, but he never forgot that ability to cross the ball. 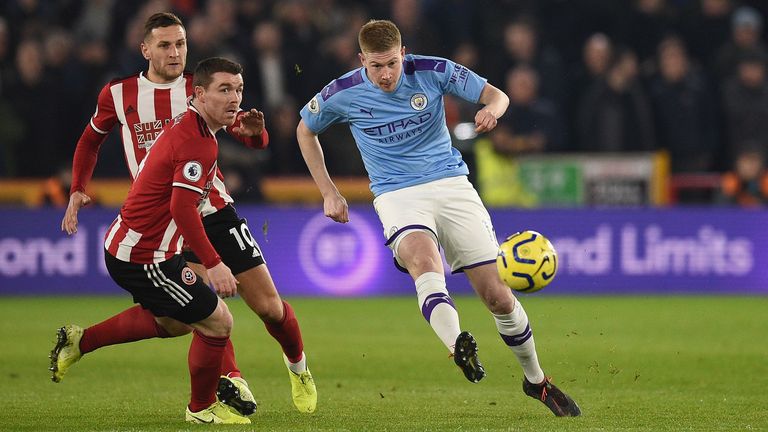 I would say he's the best Premier League passer I've seen, and that's including David Beckham, Paul Scholes, all of them, because he has the variation of passing.

"His weight of pass is phenomenal. He picks the ball up in that little pocket, where the right-back sets it back to him, and he plays that first-time ball into that corridor of uncertainty between the centre-halves and the goalkeeper, and it's just so inviting for the likes of Sergio Aguero, Gabriel Jesus and Raheem Sterling. It's so hard in the modern game to be able to play the passes he does.

"His pass appreciation, his weight of pass, is as good as anybody I have seen. Watching De Bruyne from a central area, where he just slides the ball in, you sometimes just think: 'How has he seen that?' He sees things in the blink of an eye, and I think that's what sets him apart."

De Bruyne's stats speak for themselves: he has four more assists, has created 21 more chances and seven more big chances than any other Premier League player. He also tops the Premier League charts for successful passes into the final third and successful crosses and corners.

But beyond the statistics, Redknapp is an admirer of De Bruyne's temperament and coolness on the pitch, insisting he makes the game look easy and creates time for himself on the ball.

"I love the way he plays, he just makes the game look so easy. All the great players I've played with over the years - John Barnes, Paul Gascoigne, Paul Scholes - they look like they've got more time than anybody else, and that's what De Bruyne possesses, it's like time stands still when he has the ball.

"He always has that extra moment of relaxation while everyone else is panicking, and I think that's what sets him apart for me.

"Even with my Liverpool affiliation, I've just been in awe of what Kevin De Bruyne has done this season."