Follow the FA Cup final with our live blog on skysports.com and the Sky Sports app, as well as Sky Sports News; kick-off 5.30pm

Alexandre Lacazette says his future at Arsenal is not dependent on Pierre-Emerick Aubameyang staying.

While Lacazette is tied to the Gunners until 2022, Aubameyang's deal expires in under a year and he could walk away from the club for free next summer.

Head coach Mikel Arteta has stressed he is confident he can persuade Aubameyang to sign a new contract, especially if Arsenal are successful in Saturday's FA Cup final against Chelsea.

However, if Arsenal lose they will have no European football to offer their current stars or to entice new signings to the club.

Asked if he has entered talks over a new contract, Lacazette replied: "No, we didn't talk about this.

"Me, I'm just playing my games and finishing the season to see how it's going to be but we didn't talk about anything."

Lacazette and Aubameyang are close both on and off the pitch but the France international said his future at Arsenal is not entwined with that of the club's captain.

"No, because we know that Auba has a lot of discussions with the club and I can't put my future on someone else," he replied when such a scenario was put to him.

"When he came everyone knows we had a good relationship together. We always talk about everything, not only about football but everything in life. He's a good guy. That's why between us it became really easy." 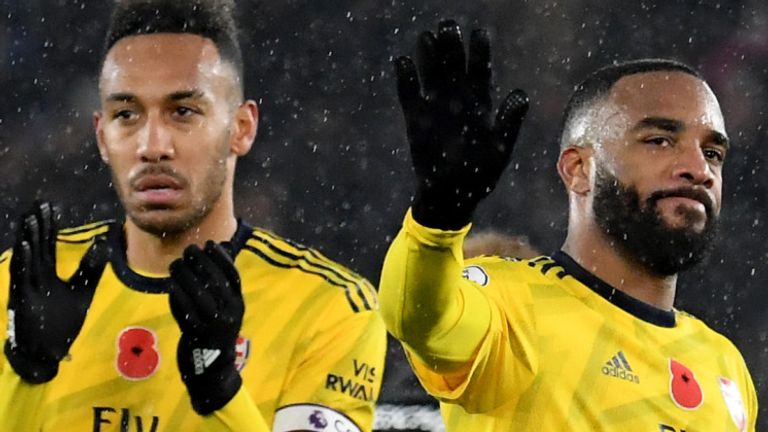 We know that Auba has a lot of discussions with the club and I can't put my future on someone else.

Lacazette has not collected major silverware since joining Arsenal but did play the whole of the 4-1 Europa League final defeat to Chelsea last season.

The 29-year-old admits the return journey from Azerbaijan following the game was a difficult one and hopes to use the loss as motivation this time round.

"Nobody was talking. It was a long flight - really silent," he said.

"(It was) maybe the worst flight I have ever had. But, yes, afterwards when you lose a final it is really hard to try to talk with someone or to laugh. Obviously everybody was disappointed.

"Hopefully for the ones who played (they) will not forget the final last season. Everybody has to find their own motivation for this game.

"Whether that is to think about the past or the future, or whether it is just because they want to win this game.

"I am confident with my team-mates. After that everything can happen in a game. But it does not matter.

"I know we can do something, we can win this game and it will be hard as Chelsea are a good team but we will do everything for the fans and club."