Frank Lampard: Chelsea still a work in progress, but we'll be back

Frank Lampard says Chelsea are still very much a work in progress after their humbling 7-1 aggregate defeat by Bayern Munich in the Champions League last 16, but insists "we'll be back" among the big time.

Lampard ended his first Chelsea season with two disappointing defeats, the 2-1 FA Cup final loss against Arsenal and Saturday's 4-1 second-leg defeat by Bayern, and the club legend insists nobody should be under any illusion about their current situation.

Speaking to BT Sport, Lampard said: "It's not a slight work in progress, It is a work in progress. It is not the norm for Chelsea. In the last 20 years we had players, teams with prime [Eden] Hazard and [Diego] Costa, prime [Petr] Cech, [John] Terry and [Didier] Drogba. Competing for the Premier League title year on year, getting to finals and semi-finals regularly. We know that's not the case [now].

"We lost the best player in the league pretty much in Eden Hazard. People would not normally commend coming fourth for Chelsea, we want more but the feeling is we have achieved something with the group we have. Now is the time to think where we can improve."

Chelsea have already signed Hakim Ziyech and Timo Werner for next season, with Kai Havertz heavily linked, but having conceded goals at a higher rate this term than any season since 1991, Lampard knows they can strengthen further.

On improving the squad, he said: "We will look at that. We have worked at it already. You feel we missed where other clubs spent and improved. Recruitment is a huge part of football. Now is the time to see if we can improve and where we can improve.

"I feel like in a football sense I know where we can improve."

Asked specifically about their performance at Bayern, Lampard insists the defeat was still a good experience for his young side, which included five Englishmen in the XI and 14 academy players in the squad.

"It's a good exercise for us to go up against Bayern and their Champions League experience, with a lot of our players having debut seasons. When you match our Champions League appearances compared to theirs, I saw lots of good things in the team and also some of the bad we have seen this season.

"We had individual errors that gave them goals and at this level that will finish you off. 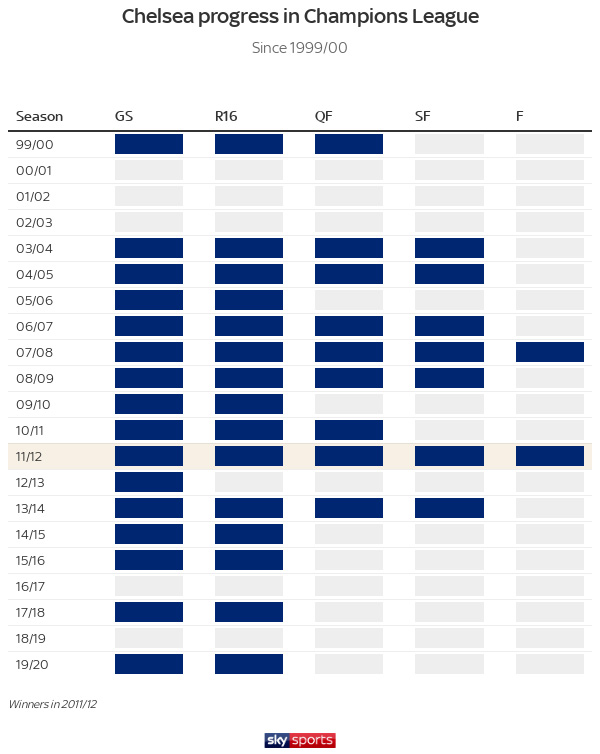 Chelsea conceded seven goals in a two-legged European tie for the first time in their history; their six-goal margin of defeat on aggregate is the second-worst by an English club in the Champions League, behind only Arsenal's eight-goal aggregate loss also against Bayern Munich in 2016/17 (10-2).