Roberto De Zerbi’s Sassuolo are in the Serie A title race, capturing the imagination by playing an exciting style of football. In conversation with the former coach of Ciccio Caputo, Sassuolo's veteran striker, Adam Bate examines how they are doing it...

Roberto De Zerbi had a question for Ciccio Caputo. The Sassuolo head coach wanted to know who had taught his star striker how to make those subtle movements inside the penalty box that somehow allow him to engineer so much time and space. The answer shocked De Zerbi. Nobody had taught him. Caputo had learned it all himself.

The story raises a smile from Vincenzo Melidona, part of the coaching team at Italian minnows Virtus Entella back when Caputo was a Serie B striker nearing his 30th birthday.

"I remember us practising corners," Melidona tells Sky Sports. "The trainer gives the schemes to the team and I was telling Ciccio the movement that he needed to make as each player has to move in a pre-determined way. Ciccio refused. He insisted that his movements would be determined by the position of the ball and the defenders."

More often than not, Melidona admits, it worked. Over the past five years, Caputo has averaged 20 league goals a season, making the seamless transition to the top flight late in his career. Now 33, it is a Cinderella story capped by a goal on his debut for Italy last month.

"He is one of the best strikers in Italy because he has movements that other strikers do not have," explains Melidona. "The skills of Ciccio are in the mind. He has incredible mental strength. On the pitch, Ciccio is so intelligent because he recognised each movement of his team-mates and each movement of the ball before all the others.

Caputo's story has captured the imagination in Italy, but even that tale might be topped by the one that is unfolding for his team. Little Sassuolo are in the race for the Serie A title.

For a brief few hours on Sunday, they even topped the table after victory at Verona, their fifth win of an unbeaten start that feels like the next step for De Zerbi's entertaining team.

The 41-year-old coach might not have been the architect of Caputo's unusual movements but since taking over in 2018 he has controlled just about everything else at Sassuolo, this tiny club that has spent more time in Italy's fifth tier than its first over the past four decades.

De Zerbi himself is something of a cult figure in coaching circles. On the face of it, his is an unremarkable record. After going close to promotion with Foggia, there was a short and unsuccessful stay at Palermo before a doomed attempt to save Benevento from the drop.

It is not just the results, although many of those have been spectacular. It is not even the fact that they have been achieved on a fraction of the budget of Sassuolo's rivals.

It is the way that they are doing it.

"De Zerbi might change the players who start the construction depending on the opponent but he never changes the principles," says Melidona. "The team's idea remains constant. The fundamental principle of De Zerbi's football is that he wants his team dominate the game by constructing the game from the back and by keeping the ball on the ground."

Even Pep Guardiola has praised Sassuolo for their expansive approach and that is appropriate given that it was on a visit to watch his Bayern Munich team in 2013 that De Zerbi's vision for the game was crystallised. He wanted his teams to play football like that.

Now, it is others visiting Sassuolo to learn from him.

A recent cohort of the UEFA Pro Master course went to see De Zerbi to understand his methods. "I have no secrets," he told them. His game is right there for everyone to see on the pitch every single weekend.

Sassuolo are the top scorers in Italy and, with a nod to Gian Piero Gasperini's Atalanta, they are playing the most attractive football too. No team has played as many passes this season, with 22-year-old midfielder Manuel Locatelli, a precocious talent, at the top of the list.

"Sassuolo not only plays the most passes but they play the fewest long balls," says Melidona. "It is a very ambitious style of play and the influence of Guardiola is clear. De Zerbi always plays with five or six men attacking. The left-back or right-back joins in. The idea is always to fill the half of the opponent with as many players as possible.

"He uses the whole width of the field. Right now, his scheme is to play with four defenders, two midfielders, three players between the midfield and the striker, and one striker.

"It is very important for him to play with his two outside players in the attack as inverted wingers, with the left footer on the right and the right footer on the left. That is because he wants width but he needs the wide attackers to move inside the box in the final third." 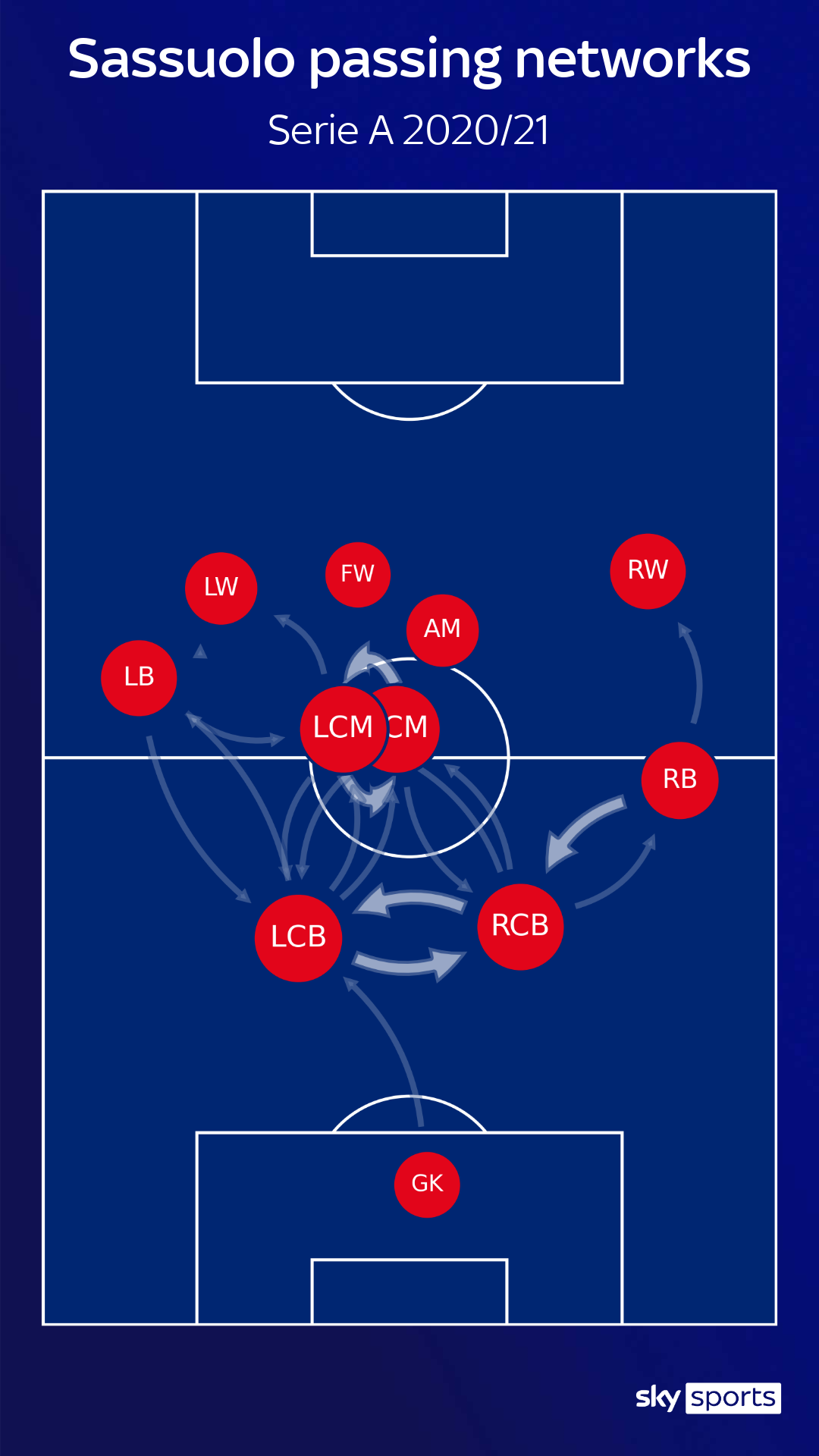 An example of this came on Sunday when, in top scorer Caputo's absence through injury, Sassuolo's goals in a 2-0 win were provided by Domenico Berardi, their left-footed right-winger, and Jeremie Boga, the former Chelsea youngster, who cuts inside from the left.

Much like Guardiola's teams, Sassuolo's expansive approach can leave them susceptible to the counter-attack and that has been reflected in some crazy scorelines. Just last month they followed up a 4-3 away win against Bologna with a 3-3 draw at home to Torino.

On Saturday, Sassuolo face Antonio Conte's Inter, against whom they drew 3-3 last time out in June having lost this corresponding fixture 4-3 last season. Entertainment is guaranteed.

"The problem is that using so many players in attacks does leave a lot of space in behind when possession of the ball is lost," says Melidona. "This is why even when Sassuolo win, they sometimes concede goals. Maybe it is a risk but it is a principle of De Zerbi's football.

"Sassuolo always try to score one more than the opponent. Sometimes the problem is that when he plays against a big team, if they do not take their chances they cannot come back."

Sassuolo in the Champions League?

In their favour is the fact that Sassuolo are improving. Young talent such as Locatelli and Boga have yet to hit their peak. Even Berardi and the veteran Caputo continue to add to their game under De Zerbi. It is a product of the style. With lots of touches of the ball and opportunities to express themselves, players are unlocking their talent like never before.

The packed schedule could also work out well.

"Maybe there could be a surprise and, to be honest, I hope that Sassuolo can qualify for the Champions League. It would be an important moment for Italian football."

Perhaps De Zerbi will move on eventually, although Melidona does not expect to see it happen while Champions League football is still a possibility. And, in Caputo, he is convinced that Sassuolo have a senior player within the ranks who can carry them to glory.