Harry Kane opted out of Thursday's Europa League game against Wolfsberger after recent ankle injury, says Jose Mourinho; Gareth Bale impressed in Tottenham's 4-1 win over Austrian side; Kane and Bale set to feature against West Ham on Sunday, live on Sky Sports from 11am; kick-off midday 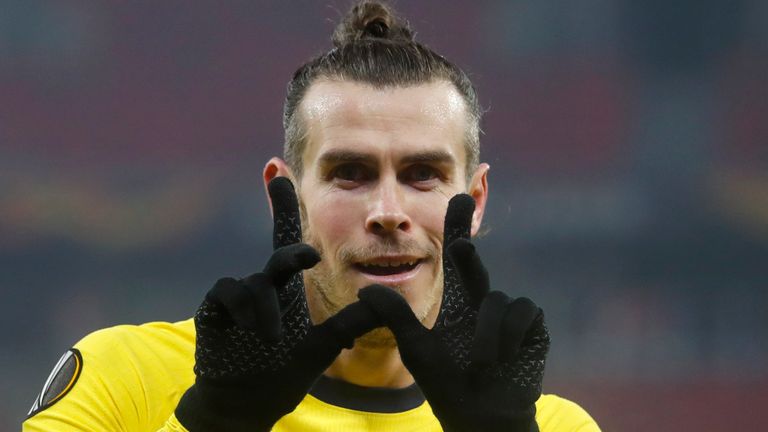 Tottenham head coach Jose Mourinho says he is 'happy' with the performances of Gareth Bale and Dele Alli in their Europa League last-32, first leg 4-1 win against Wolfsberger

Jose Mourinho has revealed that Harry Kane asked not to be considered for selection for Tottenham's game against Wolfsberger on Thursday, but says both he and Gareth Bale are in contention to start against West Ham this weekend.

Kane was not in the Spurs squad that travelled to Budapest - to where the tie had been moved - to take on Austrian side Wolfsberger in their Europa League last-32 first leg.

The England captain had played three games in six days since returning from an ankle injury suffered last month and Mourinho says the striker felt his long-term fitness would be best served by missing the trip to Hungary.

Spurs were able to cruise to a 4-1 win even without Kane, with Bale - who has struggled to impress since returning from Real Madrid last summer - recording a goal and an assist in the victory.

The Wales forward could now be set for a rare Premier League start when West Ham visit Spurs on Sunday, live on Sky Sports, and Mourinho is also expecting to have Kane available against their London rivals.

Speaking about his star striker, Mourinho said: "[He is an] experienced guy that had injuries in the past. He knows his body better than anyone.

"He knows that I want him to play every minute of every game, so it's never a question of a choice. I wanted to come here with the best team and the players that could give us more opportunities to win the game and get a good result, but he made the decision based on his feelings.

"His feelings were that to play this game could be a risk with the accumulation of minutes after the injury that he had. Of course myself and the medical department, we agreed with him in giving him this opportunity to take care of his condition, but I believe on Sunday he will be OK and ready."

Kane's decision not to play came just a week after Bale opted to sit out Spurs' 5-4 FA Cup defeat at Everton.

Despite impressing against Wolfsberger, he was substituted just after an hour into Thursday's win, but Mourinho says the decision was not a reflection of his performance.

"One of the reasons why he left the pitch by minute 65 was to try to have him available for the next match because one of the things that is not easy related to his condition is the accumulation of minutes," he explained.

"So by taking him off at that minute we managed to save him a few miles in his legs and probably, I know the match is Sunday at 12pm, but I believe he has a chance to play the match.

"Let's wait, he is the kind of player that his experience, his feelings is a very important thing, like Harry Kane. We have to trust these players and their knowledge of their body and their feelings.

"I believe for him it was important for him to play but not play the 90 minutes."

Bale not playing due to twilight of career, says agent

Gareth Bale's agent Jonathan Barnett believes the forward is not playing regularly at Tottenham because he is coming towards the end of his career.

The 31-year-old has started only two of Spurs' 23 Premier League matches since his return to north London on loan from Real Madrid, and Barnett directed the question of his playing time towards manager Jose Mourinho.

Asked why Bale was not playing regularly at the Financial Times' Business of Football event, Barnett said: "He's towards the end of his career. Really, you have to ask Mourinho that."

"When they say 'what's happened to him?' He's won more trophies abroad than any British player in history," Barnett said.

"He's done very well financially and he has enough money for the rest of his life. He has a very good lifestyle, so that is what has happened to him."