Premier League hits and misses: Would this be Pep Guardiola best-ever title victory if Man City win the Premier League?

Plus: Brighton's struggles continue in front of goal, but could it be the start for West Brom? Aston Villa are more than just Jack Grealish; Leeds are exposed by inconsistency

Would this be Pep's best-ever title?

Manchester City looked bored in early December. Their change of tack didn't sit well with many - less attacking, with the aim of conceding fewer goals - and they were written off for the title, sitting ninth in the Premier League.

Bored? City have looked anything but disinterested since, conceding just eight goals in the 27 games they've gone unbeaten in all competitions. They've combined a laser focus in defence with a more varied attack to gallop towards a third Premier League title in four years.

But given the circumstances, given the way they were written off, given the record-breaking run, would this be Pep Guardiola's best Premier League title?

"In this period, in this era, with this situation, to be able to do 20, maybe it is one of greatest achievements we have done in our careers, for sure," said Guardiola after the game.

It may even be his best-ever title. His Bayern Munich side led from the start in his three Bundesliga crowns, but the 2009/10 La Liga win with Barcelona runs it close - losing only one game and pipping Real Madrid by three points. So will the 2010/11 crown, again by only four points, alongside a Champions League win for a Barcelona side widely-regarded as the best seen this century.

But throughout that time, Guardiola was rarely written off to the extent he experienced in 2020. If not his best title win, this will surely be his sweetest.
Gerard Brand

"Brighton missed a few again today. If they can put that right they'll be a real force."

After another game where they have done everything but score, Graham Potter will once again be left scratching his head as to how they've come away with no points.

They have now lost their last two Premier League games, as many as in their previous 12 combined (W3 D7 L2). They have had 40 shots in these two defeats, while facing just nine in return.

You can point to referee Lee Mason's controversial decision as a factor in this game, but despite that extraordinary moment, Brighton still had their chances, including two penalties.

"We've not helped ourselves with the two penalties so I cannot put it all down to that [disallowed goal]," said Potter after the defeat at the Hawthorns.

❌❌ Brighton are the first team to fail with 2 penalties in the same PL game since Man Utd (v Norwich) in October 2019 pic.twitter.com/JLFDZjIn0Z

Brighton are the first team in Premier League history to miss two penalties by hitting the woodwork in a single game. In their last three league games they have had 66 attempts on goal and 20 on target but they just have one goal and one point to show for it.

And now they are slipping agonisingly close to the relegation zone. They are just four points above Fulham, who have played a game less. These are worrying times for Brighton and Potter, who need to start finding the net again on a regular basis, and quickly.
Oliver Yew

Just the start for West Brom…

"This was a huge slice of luck for us", said Sam Allardyce after his side secured a crucial three points against Brighton. "It wasn't as good a performance as I expected but the most important result, sometimes only the result matters, in our position that is all that matters today."

It's the start of a big week for West Brom with home games against Everton, live on Sky Sports, and Newcastle still to come, but this feels like a big win for Allardyce and his men.

"It's massive, the position we are in we need to put points on the board. The gaffer stressed it was a six-pointer."

Yes, they had the rub of the green but Kyle Bartley's early goal and an excellent defensive display earned the victory.

They have now kept consecutive clean sheets in the Premier League for the first time since May 2018, and they will look to continue that in the weeks to come.

There's still plenty of work to do because they still sit eight points adrift of safety, but this win gives them a fighting chance, and Allardyce will be hoping lady luck can continue to shine down on the Baggies as they plot another great escape.
Oliver Yew

With Aston Villa winning just three Premier League games without Jack Grealish since August 2018 it was understandable, if not somewhat pointless, that the pre-match build-up to Saturday's game at Elland Road concerned someone who wasn't even playing.

The cachet surrounding the Aston Villa captain just goes to show how important he remains, but it arguably did a disservice to the other members of Dean Smith's squad, whose efforts this season have been both aided and overshadowed by Grealish's quality.

But without their talisman to call upon for the second game running, Villa proved they were more than a one-man team.

Rather fittingly, Anwar El Ghazi, at the scene of his infamous red card in the 2019 Championship encounter between the two sides, earned Villa a first Premier League win at Elland Road since December 2000.

El Ghazi looked intent at leaving his mark on the game and was involved in seven of Villa's eight attempts on the Leeds goal, deservedly landing the man of the match award. But his defensive colleagues weren't far behind with their performances.

The guile of Grealish has rightfully landed the majority of the plaudits in Aston Villa's stirring response to narrowly avoiding relegation last season, but this latest victory, albeit less entertaining, was borne out of grit and resilience fans love to see from their team on the road.
Jack Wilkinson

Levelling criticism at Leeds United this season has proven to be both a treacherous often unwise path to venture down.

Marcelo Bielsa's side have torn up the copy book for newly-promoted sides, winning acclaim and a few more believers, more often than not, every time they step onto the field.

How could you criticise a team who, having ended a 16-year hiatus from the top-flight, have already amassed more points than the entirety of their last Premier League season in 2003/04 and, before Saturday's game with Aston Villa, had scored 43 goals - the most at this stage of any of their Premier League campaigns?

But alongside an abundance of positives remains a fundamental flaw to Bielsa's side - inconsistency. It has left Leeds exposed to critique off the field, while Aston Villa were the latest side to exploit that flaw on it.

Having steamrollered Southampton on Tuesday night momentum was with Leeds to do the same to a Villa side searching for answers on how to win without Jack Grealish. Leeds handed the answers to Dean Smith's side, gift-wrapped.

Anwar El Ghazi's early strike saw Leeds concede a league-high 27th goal before half-time, and when it came to mustering a response, the usual free-flowing football was nowhere to be found as Bielsa's side succumbed to a sixth home defeat of the season.

It's the second-highest number of home games Bielsa has lost in a season, second only to the eight he suffered while in charge of Athletic Bilbao in 2012/13, and if Leeds buck up their ideas that unenviable record could be surpassed.
Jack Wilkinson

"In management you sometimes have to make a decision that is cruel," Steve Bruce told Sky Sports beforehand. "Karl has done so well but I just feel the influence of Martin with his experience when results have not been great for us [can help]." There will be those who back that decision and those who feel Karl Darlow should have retained his place. Those views are unlikely to change after this.

Martin Dubravka's inability to keep out Ruben Neves' second-half equaliser despite getting his hand to the header, will have some wondering whether Darlow might have done better. For while the English goalkeeper has had some lapses of late, his Slovakian team-mate has not been faultless either. No Premier League player made as many errors leading to goals as Dubravka last season.

And yet, his remarkable reaction stop to prevent Fabio Silva snatching victory for Wolves at St James' Park surely redeemed his performance. It was an astonishing save from point-blank range deep into stoppage time and could be crucial for Bruce - the point moves Newcastle level with Brighton. It was a big call by the manager and while the debate will go on, he will feel vindicated. Just about.

Traore accusations are unfair on winger

Adama Traore has now played 32 games in the Premier League without providing an assist. It has sparked renewed talk of a lack of end product - criticism that his supporters might have thought had stopped for good - but how fair are those comments when he is creating so much for his team?

Against Newcastle on Saturday evening, it was Traore's penetrative run down the left that found Pedro Neto in space only for the Portuguese to measure his pass just the wrong side of the post. Soon after, Neto could only scuff wide after another wonderful dribble by his fellow winger.

By the end of this 1-1 draw, Traore has created four chances from open play to take his tally to the season to 35 - among the six most creative players in the Premier League this season. 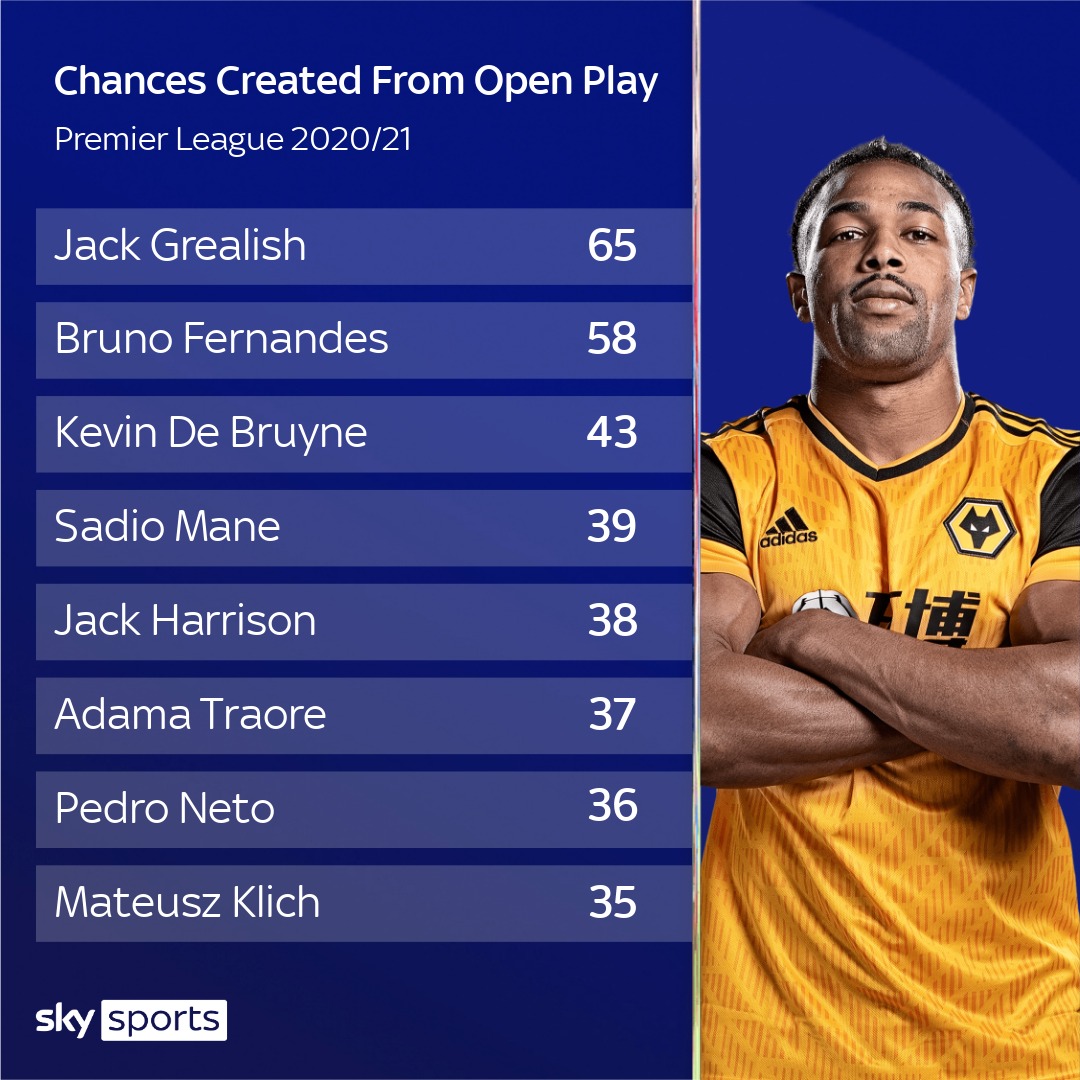 But while the five men above him on that list have 37 assists between them, Traore is still waiting for his first of the campaign. In fact, he is the only player among the 35 most creative players from open play in the Premier League who is yet to provide the pass before the goal.

It is easy to say that Traore needs to up his numbers but he is at the mercy of his colleagues - and the quirks of the metric. He was not credited with an assist for his fierce shot that struck the frame of the goal and ricocheted off goalkeeper Illan Meslier in Wolves' recent win over Leeds.

The reality is that he is in form and impressing - there was even rare praise from manager Nuno Espirito Santo after the game at St James' Park. Switching Traore to the left and Neto to the right has sparked an upturn in form with both players able to get more involved in the game than before.

The pair had 65 touches of the ball each against Newcastle - the most that Traore has had in a game since playing as a wing-back in September. The change has worked and while the Spaniard's wait for an assist goes on, accusations of a lack of end product feel misguided when he is performing like this.
Adam Bate