Bruno Fernandes: "Some people have said I'm playing bad, and that I have to do better. But for me, it's OK. I can have that pressure on my back"; Follow Man City vs Man Utd live on Sky Sports PL and Main Event from 4pm on Sunday; Kick-off 4.30pm

Bruno Fernandes has brushed off suggestions he is a flat-track bully as the Manchester United midfielder looks to inspire his team to victory on derby day this weekend.

United travel to Premier League leaders Manchester City on Sunday, live on Sky Sports, and know even a victory would only take them to within 11 points of Pep Guardiola's side.

Fernandes, who has 40 goal involvements in 41 appearances for the club, has scored two non-penalties in his last 13 games and comes into the encounter having netted one non-penalty in eight fixtures against the 'big six' this season.

But the Portuguese midfielder, who has won four Player of the Month awards since arriving in January 2020, has defended his record and is ready to answer his critics in the best possible fashion - starting against the runaway leaders at the Etihad Stadium.

Fernandes told Soccer Saturday: "I don't know what people mean by 'top six', because the teams are in top six in the table. I score and assist against some of them. I score this season against Tottenham. But some people say penalties don't count!

"I see people talking about Bruno not doing so well against the 'big six'. People have said Bruno gives the ball away too many times when we lose a game.

"Also, in the game against Basaksehir, I scored two goals and I lost more balls than their team, but people said I was the best player in the game. So, what is the point? 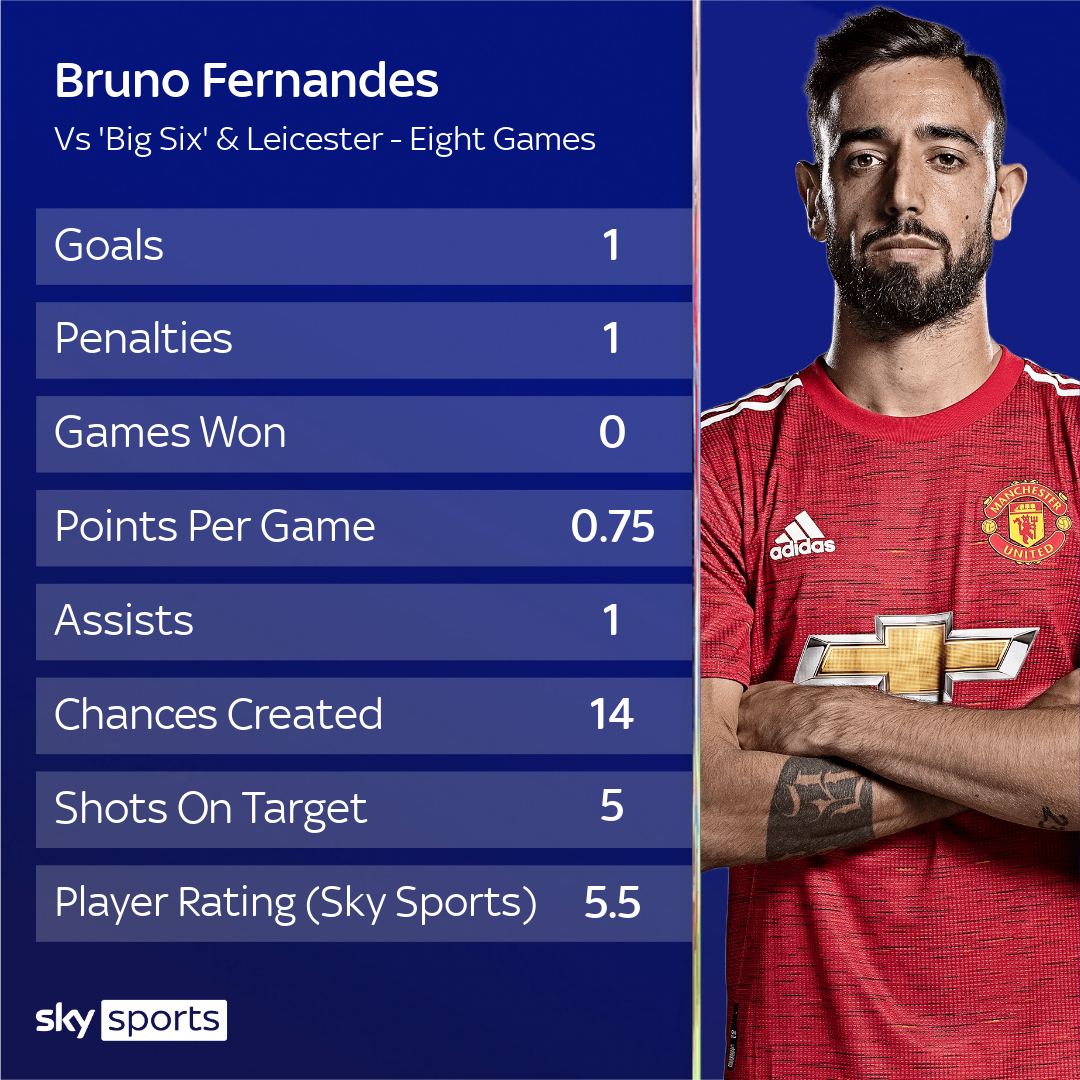 "I saw an interview from Luke (Shaw) saying, 'people now care more about stats than the performance'. And this is the truth. Because now they're expecting from me just goals and assists, and not performances.

"But this is football. Football is in the moment. Some people have said I'm playing bad, and that I have to do better. And I agree, because we always can do better. But for me, it's OK. I can have that pressure on my back.

"I'm sure in some moments, I will score, I will assist, and I will perform. And that will help my team-mates to win the game." 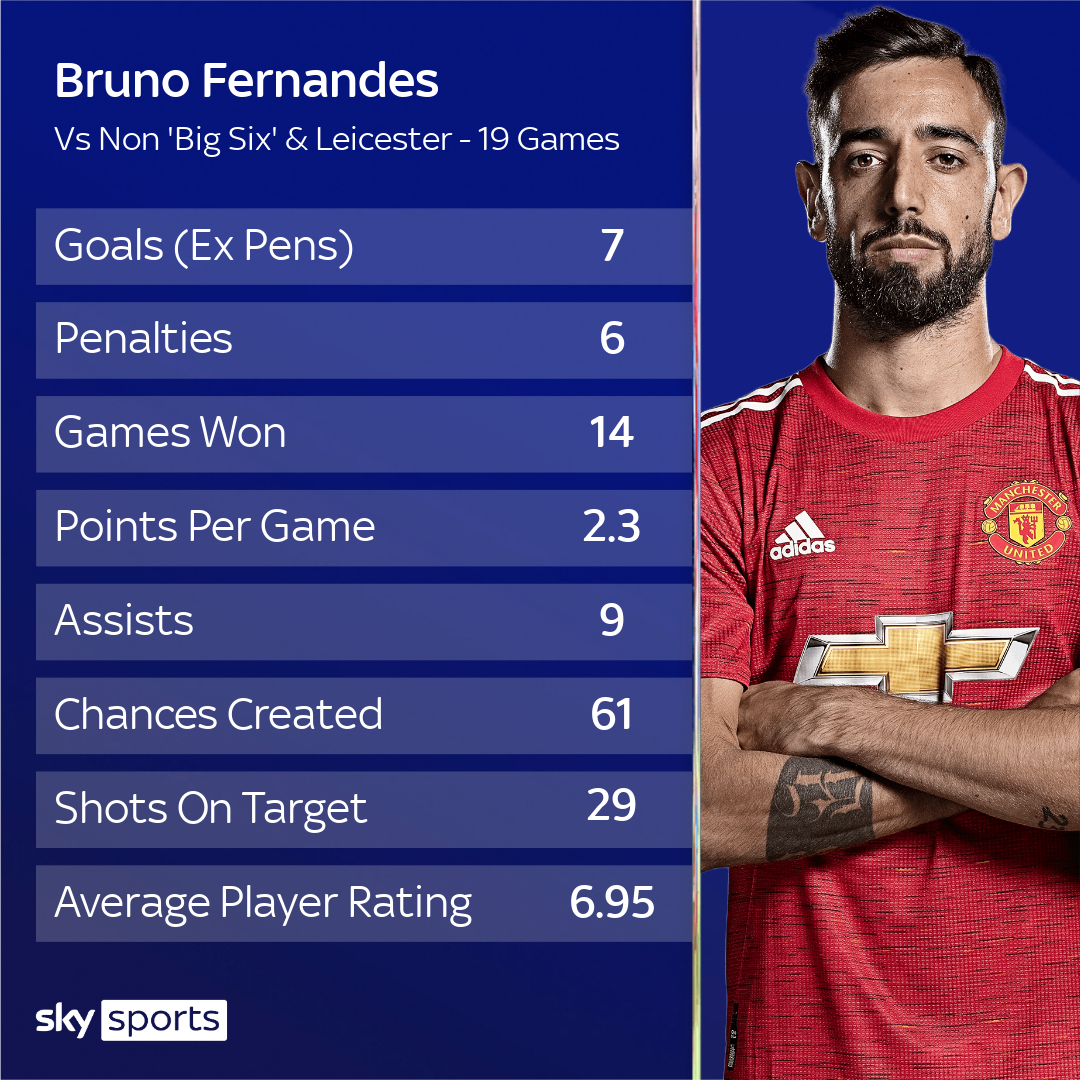 While some have claimed Fernandes has been 'Mr Invisible' when it has mattered for United, the team as a whole have failed collectively to score in their last six Premier League games against 'big six' opponents - a total of 628 mins.

On January 12, United sat atop the Premier League table after 17 fixtures following a 1-0 win at Burnley, while their city rivals were seven points below them, albeit with two games in hand.

Less than two months later and most think City are champions-in-waiting, 14 points clear of second-placed United thanks to an unbeaten run stretching back to November 21.

There are murmurings of discontent at United after three successive goalless draws in all competitions, so what better way to end the goal drought than against the league leaders on Sunday?

A win will likely make little difference in the title race, but it would strengthen United's hopes of a top-four finish - and Fernandes is aware how success against the neighbours could have huge ramifications on the rest of the season.

"I think everyone knows what it means to play a derby - it doesn't matter which derby it is," he continued.

"The derby always means a little bit more. Here, we talk about the city. We have two sides, and we want to have the winner on our side. We want to do this, and we have to do this, first of all, for us. And of course, we don't forget, for all the fans who are supporting."

Man City's 4-1 win over Wolves at the Etihad Stadium on Tuesday night made it 21 straight wins in an unbeaten run of 28 in all competitions.

Ole Gunnar Solskjaer admitted his side's lack of goals was a bit of a worry after they were held to a 0-0 draw at Crystal Palace - but Fernandes has his sights set on ending City's formidable run following a third straight stalemate in all competitions.

"Crystal Palace was a tough game because they defended well and played compact," he added. "But we have to create a little bit more no matter how compact the teams are.

"We know that we play for a big team and we know we have to win every game. Of course, everyone knows playing the derby is always important for us to win.

"But now we have to look to ourselves and don't think too much about the table. If we win our games until the end of the season, we will count the points then and this is the most important thing.

"It will be a difficult game because they're the most in-form team in the league. They've been playing well for a while, but we've already shown in the past we can create chances against them. We can do great things, but we have to act as a team. We must play as a team and hopefully we will win as a team."

In this week's Pitch to Post preview podcast, Alice Piper is joined by Sky Sports News reporters Ben Ransom and James Cooper to look ahead to the Manchester derby. Can City end United's 21-game unbeaten away run to stretch their Premier League lead to 17 points?

We also hear from Rob Dorsett ahead of the Midlands derby between Aston Villa and Wolves, with both sides looking to return to winning ways.

And Michael Bridge gives us his verdict on Tottenham's recent resurgence, as they prepare to welcome Crystal Palace.