Leonardo Bonucci scored Italy's equaliser in the second half after Luke Shaw had given England early lead in the Euro 2020 final; Bonucci: "Sorry for them but actually the cup will be taking a nice flight to Rome and that way Italians all over the world can savour this" 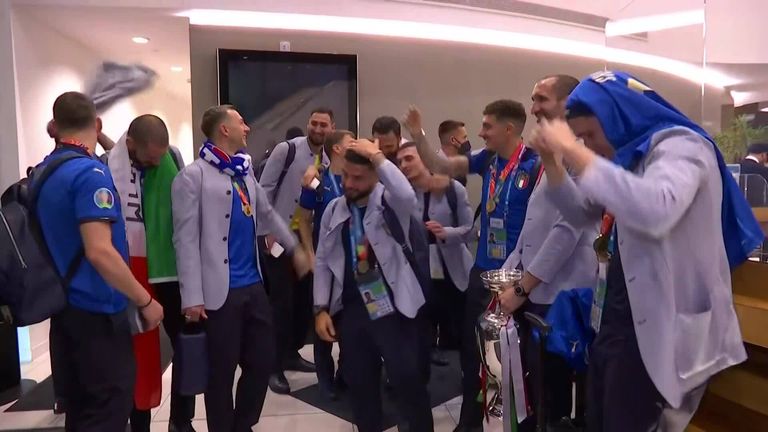 Italy players celebrated their Euro 2020 success as they arrived at Luton airport from Wembley, singing 'it's coming Rome'.

Bonucci played a star role in the Azzuri's success at Wembley, cancelling out Luke Shaw's early goal in the second half and then converting a penalty during the shootout which his side won 3-2.

It was a timely night of glory for the 34-year-old, who broke his country's record for the most appearances in the European Championship with 18 and it delivered more heartache for England, whose 55-year wait for a major tournament victory goes on.

There was plenty of expectation that Gareth Southgate's side would win, as their famous anthem Three Lions reverberated around the country following their semi-final win over Denmark on Wednesday.

But Bonucci said that gave his side motivation.

"Absolutely. We heard it day in day out ever since Wednesday night since the Denmark game that the cup would be coming home to London," he said.

"Sorry for them but actually the cup will be taking a nice flight to Rome and that way Italians all over the world can savour this competition.

"It is for everyone, we said from day one it was for them and for us."

The victory extends Italy's unbeaten run to 34 games, going back to their failure to qualify for the 2018 World Cup. Bonucci says the future of the squad under Roberto Mancini is good.

"This victory really proves that once you go all the way all you need to do is try and give yourself a push to get back to the top," he added.

"You need to want it more than anything else, this is a renaissance for Italian football, and I am sure this squad and this great coach will make plenty of headlines going forward.

"We believed right from day one when we all joined up, there was different feeling in the air and it has come to pass.

"We never got tired of being together or spending time together, we had this burning desire to stay together and it is incredible."

Italy head coach Roberto Mancini added yet another trophy to his cabinet, completing a sensational turnaround of the national team, who failed to qualify for the World Cup three years ago.

"It was impossible even to just consider this at one stage, but the guys were just amazing. I have no words for them, this is a wonderful group. This was a difficult game made a lot harder after their early goal. Apart from that early spell, we dominated the match.

"We are delighted for people and the Italian public because they really deserve this after what has been a trying period. This is great joy for us.

"Winning the European Championship for the first time since 1968 and bringing home the trophy I do think it is something incredible.

"Seeing everything we have managed to create, all of the hard work we have put in over the last three years but specifically the last 50 days which have been very hard.

"It's the fact we have been able to forge this team spirit over the last 50 days, they have really created something which can never be separated going forward. They will always be synonymous with this triumph.

"You have to have a little luck on penalties. I feel a little sorry for England, because they also had a great tournament. The team has grown a lot and I think we can improve further. We are very happy for all Italians. I have no words for these guys!"

How other Italy players reacted

Italy captain Giorgio Chiellini to ITV: "It was a tough game, we started in the worst way possible, with England scoring after two minutes. The fans, all of the stadium, gave their energy to England, but we were quiet and calm and then we started to lead the match from 15 minutes and started to play.

"We found the right passes, controlled the game and that was the way to win. It's a dream come true, it's magic. We are more than happy."

"We [Bonucci and Chiellini] have been waiting for this moment from 2012. We were a step away, but we've been chasing after it. But we believed we could get it done."

Italy goalkeeper Gianluigi Donnarumma: "We have done something extraordinary. We are happy. We didn't give up a millimetre. You all know where we started from. We are a fantastic team and we deserve it.

"The goal we conceded at the very start could have done for us, but we are not a team that gives up. It wasn't easy but we were spectacular, great. We dominated for a large part of the game. We deserve all this."