England and other nations had wanted to wear the OneLove armband at the 2022 World Cup; however, England opted not to after being threatened with disciplinary action ahead of their opening Group B clash with Iran; FA CEO calls actions 'outrageous' 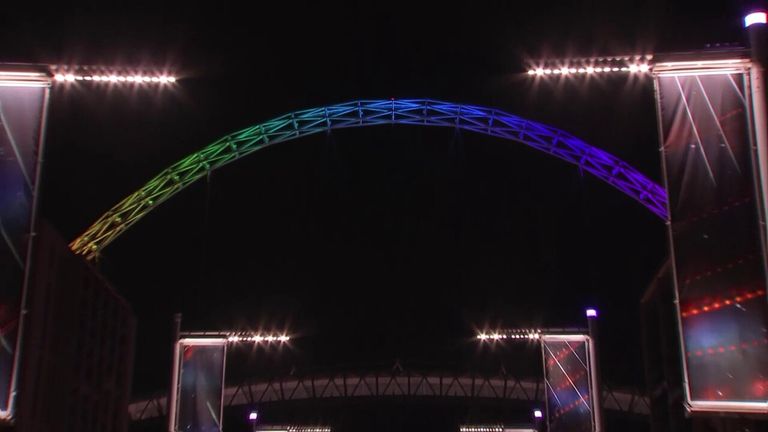 The FA have lit the Wembley arch in rainbow colours to show solidarity with the LGBTQ+ community after they decided England captain Harry Kane would not wear the OneLove armband at the World Cup in Qatar.

FIFA's decision to threaten teams with disciplinary action for wearing the OneLove armband at the World Cup in Qatar was "outrageous", says Mark Bullingham, the Football Association's CEO.

England, along with six other nations, decided not to wear the armband and opted for the FIFA approved 'No Discrimination' armband, with the U-turn announced just three hours before their opening Group B 6-2 win over Iran on Monday.

Harry Kane, Gareth Bale and Virgil van Dijk have since spoken of their disappointment at not being able to wear the armband, while the Germany team put their hands over their mouths ahead of their opening match against Japan in an apparent protest over free speech.

It was widely reported that FIFA made it clear that players who wore the armband could be shown yellow cards, but Sky Sports News also understands that the prospect of bans was also raised.

Gareth Southgate says the England team were not distracted by the decision not to wear the OneLove armband, but insists 'people know what we stand for'.

Sky Sports News' Rob Dorsett and Kaveh Solhekol explain that Harry Kane could have risked a ban if he had chosen to wear the OneLove armband in the match against Iran.

And now Bullingham has claimed that FIFA threatened "unlimited" punishments during discussions. Sky Sports News has approached FIFA for comment.

Speaking on ITV ahead of England's second Group B clash with the USA on Friday, Bullingham said: "It's very important to understand what happened. We have been very clear, we wanted to wear it and we were committed. On Saturday before the game, we reached an understanding where we thought we could wear it.

"We hadn't got permission but we would then face a fine for it. Unfortunately, on the day of the game, they gave us 10 minutes' notice, two hours before we were due to go to the game.

"They came here with five officials and ran us through a scenario where, at a minimum, anyone wearing the armband would be booked and face disciplinary action on top of that.

"The way they [FIFA] acted was completely unprecedented. The level of feeling was really high, we were frustrated and angry. It was outrageous the way that this was handled. 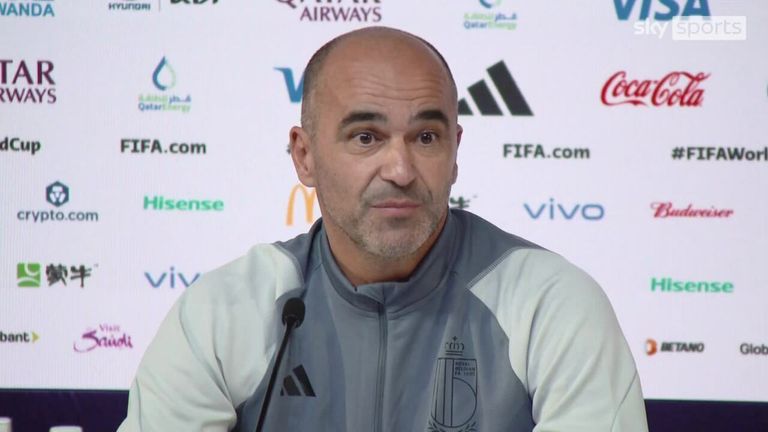 Belgium manager Roberto Martinez avoids giving his reaction to not wearing the OneLove armband and says his squad's focus is just to create a legacy through playing football.

"I do think that as any bidding criteria [for future host nations] you have to have a basic level of human rights. That's absolutely part of the discussion that has to be had.

"We wanted to show support for these communities and it's incredibly frustrating that we've not been able to do so."

The Wembley arch was lit up in rainbow colours on Friday. The FA said in a statement: "The FA will continue to show our support to the LGBTQ+ community and all other communities during this tournament and long beyond, starting with lighting up the Wembley Stadium arch in rainbow colours for Friday night's match with the USA."

Sky Sports' Gary Neville told ITV Sport he was disappointed that England had not seen through their plans to wear the OneLove armband in spite of FIFA's threat of sanctions.

Neville had previously tweeted that England's backroom staff, led by Gareth Southgate, could rotate the armband on a game-by-game basis - even if captain Kane did not wear one.

The former England right-back also took aim at FIFA, whose own president Gianni Infantino appeared to relate Qatar's human rights record with his own stories of being bullied at school on the eve of the tournament.

"It doesn't surprise me that FIFA have acted like that," Neville said. "They're a rogue organisation who in this particular tournament we've seen them at their worst.

Sky Sports News' Geraint Hughes reports that Wales were 'angry and irritated' that they were prevented from wearing the OneLove armband during the World Cup.

"What's an armband going to do to harm FIFA? I accept the fact that ultimately they've got rules and laws against political protests. Players can't pull shirts over their heads.

"The reality is [England] should've seen it through as they'd spoken so much about it and had backed themselves into a corner on it.

"It's always footballers who put themselves at the forefront but every other sector in the country are OK just to carry on. I'm proud of the players. They've done more for English football and for England in the last four or five years than most.

"However, I think they should've seen it through."