England finished in top spot of Group B, remaining undefeated against Iran, USA and Wales; other World Cup contenders such as France, Argentina and Belgium have suffered shock defeats; the Three Lions face Senegal in the last 16 on Sunday and Declan Rice says England should be feared 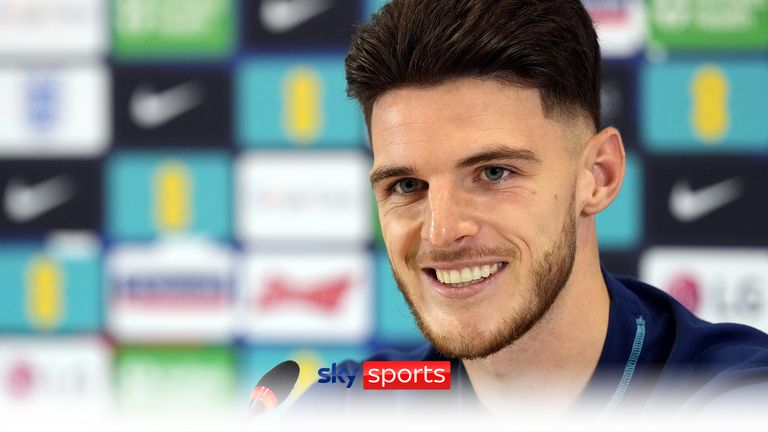 Declan Rice believes England should be getting more credit for their performances in a tricky World Cup group stage - while other contenders such as France and Argentina suffered shock defeats.

The Three Lions cruised to top spot in Group B thanks to two wins and a draw against Iran, United States and Wales - securing their-highest group stage points total at a World Cup since 2006.

Meanwhile, other World Cup contenders such as Argentina, France and Belgium suffered shock group stage defeats and ahead of England's last-16 tie against Senegal on Sunday, Rice has praised the focus shown by his team-mates in a tricky group.

"I didn't see the France [loss to Tunisia] last night," said Rice. "I saw the result and there have been a lot of shocks in this tournament. You can't take anything for granted. That's why we're doing so well and maybe why we are not getting the credit we deserve.

"It could have been banana skins for us in any of the three games, but we've done well in all of them. We've seen big nations lose but we have not put ourselves in a position where we've felt under pressure. We've always felt in control of the group.

"When you start to play better teams, your level goes up. These are the games you want to be involved in and get remembered forever. We will be ready for those type of games."

England manager Gareth Southgate has made good use of the Three Lions' attacking depth, with Bukayo Saka, Raheem Sterling, Phil Foden and Marcus Rashford all finding the net in the group stages, with the quartet rotated in the three games.

That depth means England have scored more goals in this tournament already than they have in every previous World Cup edition - barring their last triumph in 1966 and the 2018 World Cup - where they reached the semi-finals.

"Other nations will always look at us and the quality that we have in the squad, why should we not be feared?" asked Rice. "If you look at our attacking players, we have world-class, unbelievable talents across the board. And across the whole team too, we have players who have won the biggest trophies.

"We are one of the biggest teams here, it's down to us to prove it on the pitch. Teams like the French have won a World Cup and done it consistently. Now we want to change that.

"All those big nations, we want to show that we're here. We are not here for the round of 16, we want to go all the way."

Part of that attack is Manchester United forward Rashford, who scored twice against Wales on Tuesday night to take his tally up to three for the tournament.

Rashford is tied with Kylian Mbappe and Cody Gakpo at the top of the World Cup Golden Boot standings and Rice believes there is no doubt that the 25-year-old can repeat Harry Kane's feat from four years ago.

"From the first moment I came into the England set-up, Marcus is a person I've always said is one of the standout people," said Rice. "I was so surprised by it: He's lightning quick, his speed, his eye for goal and his technique.

"I know he had a tough year last year but no-one ever doubted his quality. Now seeing him on the biggest stage, it's making me and the team really happy.

"The Golden Boot? There's no reason why he can't. If he keeps making those attacking runs behind the defence, like he does for United, he's going to keep getting the chances.

"It would be amazing for him to win the Golden Boot and I would be delighted for him if he'd get that."

Rice also was full of praise for Jude Bellingham, his new midfield partner for this tournament, who has impressed in all three World Cup matches so far and scored England's first goal of the group stages against Iran.

"We're doing well. We haven't even played 10 games together in the midfield. It's hard when you're not playing at club level together," said Rice.

"He gets around the pitch really well. I've said to him: This is your stage. If you attack and get into the box, I'll be there for you [in defence]."

Asked about his goal against Iran, Rice said of Bellingham: "I think he has showed that side to his game extremely well. There's been loads of goals this season when he's made that late run into the box and scored.

"He didn't really do that last season, but this season he is really adding that to his game.

"Lampard was the best at arriving really late, he's really starting to show that now. Hopefully he can keep producing."