Record, a Portuguese publication, reported that Ronaldo told head coach Fernando Santos he might leave Qatar after finding out he would be benched for the World Cup last-16 encounter against Switzerland, before calming down and realising his departure could negatively impact the team

The Portuguese FA has denied a report that claimed Cristiano Ronaldo threatened to leave the World Cup in a conversation with head coach Fernando Santos.

Record, a Portuguese publication, reported that Ronaldo told his coach he might leave Qatar after finding out he would be benched for the last-16 encounter against Switzerland - which Portugal won 6-1 - before calming down and realising his departure could negatively impact the team.

But the Portugal Football Federation has rejected this version of events in a statement released on Thursday, which defended Ronaldo's legacy and dedication to the team.

A statement from the nation's football federation read: "News released this Thursday reports that Cristiano Ronaldo threatened to leave the national team during a conversation with Fernando Santos, national coach. "Cristiano Ronaldo builds up a unique track record every day at the service of the national team and the country, which must be respected and which attests to the unquestionable degree of commitment to the national team.

"Incidentally, the degree of dedication of the player most capped by Portugal was again demonstrated - if necessary - in the victory against Switzerland, in the round of 16 of the 2022 World Cup.

"The national team - players, coaches and FPF structure - is, as it has been since the first day, fully committed and enthusiastic in building what the country wants to be Portugal's best-ever participation in a World Cup."

Ronaldo: Portugal too close to be broken by outside forces

Ronaldo took to social media to respond to reports he threatened to leave the World Cup, reiterating outside forces would not derail Portugal.

"A group too close to be broken by outside forces," he wrote on Twitter. "A nation too brave to let itself be frightened by any adversary. A team in the truest sense of the word, which will fight for the dream until the end! Believe with us! Strength, Portugal!"

Portugal midfielder Otavio faced the media after Ronaldo's post landed on social media and reiterated how strong and united the Portuguese camp remains.

"What he said is right," Otavio said. "Nothing from the outside can break us apart. We are tight and we are focused on winning. Everything is normal. There has been no arguing.

"Everyone is bitter when they don't play, and that is natural. I think he [Ronaldo] is completely on board with the team. You'll see his heart and soul is in the national team. He is centre of attention but he's part of the team. He's fine and the team is fine." 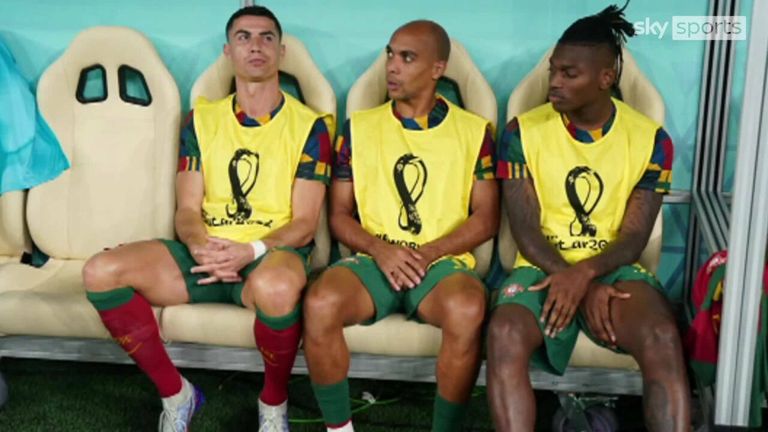 Fernando Santos said any issue with Ronaldo has been resolved and that full focus should be on the whole Portugal squad, following their impressive 6-1 win against Switzerland

Ronaldo's role for the remainder of the World Cup is something that has to be "defined", Portugal boss Santos said after benching his captain for their emphatic 6-1 win over Switzerland.

The 37-year-old watched from the bench as his replacement Goncalo Ramos scored a hat-trick to set up a quarter-final against Morocco.

Asked about Ronaldo after the Switzerland win, Santos said: "That is still something that has to be defined.

"I have a very close relationship with him - I always have, I have known him since he was 19-years-old.

"This relationship only develops, Ronaldo and I never interpret the human aspect of that of manager and player [in relation to] what we have to do during the match.

"I will always consider in my role that he is an important player to have in the team."

When asked directly if Ronaldo would play against Morocco, Santos replied bullishly: "Ronaldo will definitely [be involved], all the players on the bench can be used, if they are not in the starting line-up they can play later.

"It is important to look at the example of this player's history, he is one of the best players in the world at playing professionally, being captain - all we have to do is think about this team collectively."