Transfer news, rumours and gossip from Stamford Bridge during the 2023 January transfer window; the window opened on Sunday January 1 2023 and closed at 11pm on Tuesday January 31

With the January transfer window closed, we round-up Chelsea's done deals, plus the players who exited Stamford Bridge. 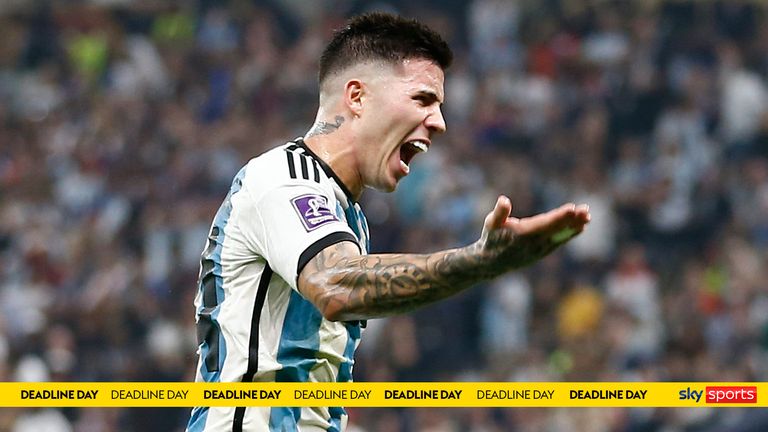 A look at what Chelsea could expect from Argentinian midfielder Enzo Fernandez. if they manage to sign him.

Chelsea have signed midfielder Enzo Fernandez from Benfica for a British-record £106.8m.

The deal for the Argentine surpasses the £100m Manchester City paid for Jack Grealish from Aston Villa 18 months ago.

The 22-year-old, who only joined Benfica last summer for around £10m, has signed an eight-and-a-half-year deal at Stamford Bridge to keep him at the club until the summer of 2031. Jamie Carragher believes Jorginho could be the calm head that Arsenal need if they are to go on and win the Premier League title.

Arsenal signed Jorginho from Chelsea in a Deadline Day deal worth £12m, boosting their midfield ahead of a push for the Premier League title.

The 31-year-old Italy midfielder signed an 18-month contract, with an option to extend for a further year.

Jorginho was into the final six months of his Chelsea contract.

Chelsea signed winger Mykhailo Mudryk from Shakhtar Donetsk in a deal worth £88.5m.

Mudryk previously indicated Premier League leaders Arsenal were his preferred destination in a series of social media posts. The Gunners remained in talks but were prepared to walk away from the transfer if the deal was not right.

Chelsea eventually agreed a deal with Shakhtar and the 22-year-old travelled to west London to complete a medical before signing an eight-and-a-half-year deal. Chelsea completed the signing of Joao Felix on loan from Atletico Madrid for the remainder of the season.

The Blues beat Premier League rivals Manchester United and Arsenal to the signing of the Portugal forward, with neither side willing to pay the €11m (£9.69m) loan fee plus wages.

Felix made his Chelsea debut at west London Fulham on January 12, with the 23-year-old impressing in the first half but then receiving a straight red card as his side slipped to a 2-1 defeat.

Chelsea completed the signing of Monaco defender Benoit Badiashile in a £35m deal on a seven-and-a-half-year contract.

Sky Sports News reported in late December the west London club were in advanced talks over a deal for the 21-year-old France international and the player completed his switch to Stamford Bridge in January.

Badiashile is considered one of the best young left-footed centre-backs in Europe and this has been a profile of player Chelsea have wanted since the summer.

Chelsea completed the £29m signing of PSV winger Noni Madueke, with the 20-year-old has signed a seven-and-a-half-year contract, with a club option to extend for a further year.

The England youth international, who came through the ranks at Crystal Palace and Tottenham, left PSV after four-and-a-half-years at the Dutch club where he scored 21 goals in 77 appearances.

Chelsea signed Lyon right-back Malo Gusto for £26.3m, with the 19-year-old spending the rest of the season back in France on loan.

Gusto signed a seven-and-a-half-year deal at Stamford Bridge, but will end 2022/23 with his former club, for whom he has made 15 Ligue 1 appearances this season.

Sky Sports News revealed Chelsea had agreed a deal with Vasco to sign the midfielder earlier in the window.

Santos ended his Vasco career with 38 appearances and eight goals.