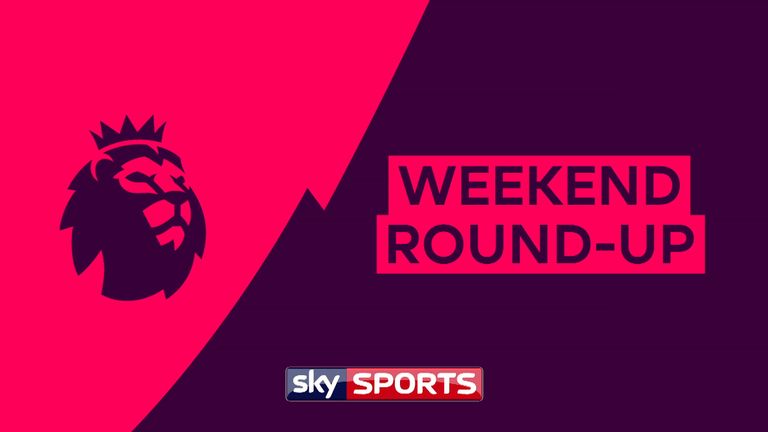 Did your Premier League team live up to expectations this weekend?

We've asked former England, Arsenal and Leicester striker Alan Smith to give each side a grade based on their performance in the latest round of fixtures.

So, who finished top of the class? Did your team get an A+, an F, or something in between? Read on for the Sky Sports pundit's verdict...

A great result, you could see that by the celebrations. This will be one of the games Chelsea will look back on when they win the title and say how important it was.

They were excellent. They took the game to Arsenal, exploiting their weaknesses. It was an all-round great performance from Tony Pulis' men.

To get a clean sheet, which they haven't had many of, will mean a lot to Eddie Howe. That's also back-to-back wins now, following last week's win over West Ham. They're not out of trouble yet but they will be fine. With Callum Wilson injured it was important Benik Afobe rekindled his touch in front of goal.

This was a vital three points for Palace. The clean sheet will have delighted Sam Allardyce - he's had to wait a while for that kind of defensive performance. We will see that happening a lot more from now until the end of the season as they edge towards safety.

A couple of late goals made the result more comfortable than it was but Everton are on a roll, full of confidence. The Romelu Lukaku issue didn't seem to unhinge them, which would have pleased Ronald Koeman.

It's amazing how quickly things can turn. Craig Shakespeare can do no wrong at the moment and I see Leicester climbing up to a mid-table finish. They've rekindled their form from last season.

I was at White Hart Lane and when Spurs went 2-0 up I thought they would go on and add to that in the second half. But to Southampton's credit they replied after the break and Spurs had to battle.

They never looked like they wouldn't get three points but to win without Harry Kane and seal a 10th league home win in a row was impressive.

Liverpool played their part in a cracking game which could have ended in a 5-5 draw. It was one for the purists who want to see free-flowing football. However, they will wonder what might have been had they converted their chances.

Pep Guardiola was delighted with how his players responded to their Champions League exit with a spirited display in their 1-1 draw with Liverpool.

Fantastic game. It was probably a better point for Liverpool even though they surrendered a lead. There are still questions at the back for City, you get the sense they will concede goals, but they showed a lot of spirit to get back into the game, although Pep Guardiola's post-match praise took me by surprise.

United's unbeaten league run continued, despite Jose Mourinho's pre-match prophecy. They had a helping hand from Victor Valdes at the end but they did enough to get the win which finally saw them move out of sixth.

5 - Manchester United will end the day inside the top 5 of the Premier League table for the first time in 184 days (16th Sept 2016). Climb. pic.twitter.com/bh7ORY0Vva

Stoke pushed Chelsea all the way and made it quite a physical game. It took Chelsea until the 87th minute to get the win. It was a typical, battling Stoke performance against the best team in the country, who simply don't know how to give in.

Little by little Burnley are improving away from home. That illusive win on the road will come at some stage this season, especially if they continue to produce performances like the one seen at the Stadium of Light.

Claude Puel got into his side at half-time and they came out and did much better. Unfortunately they couldn't claw themselves back into the game enough to get a point.

Conceding twice early on made things difficult for West Ham. Had things gone differently they could have got a point, if not more. They will feel as though they didn't get the rub of the green it's another example of where they haven't got the result in front of their own fans.

Hull have got to forget about the result, move it to one side and focus on their next game. Not a great day for them, especially with Tom Huddlestone's unfortunate red card. In the end that was what weighed against them.

They scored a goal! It was always going to be a tough fixture, especially with Steve Agnew trying to tweak things to make the team more adventurous while retaining the defensive solidity. Unfortunately against United they couldn't do that but they gave it a go.

This was a great opportunity for Sunderland against a Burnley team who don't know what an away win looks like. Take nothing away from Burnley, who showed at Liverpool they're a tough nut to crack. But you could see by how gutted David Moyes was that this was a chance missed.

Not the result Swansea have had in recent weeks under Paul Clement but, similarly to Hull, they've got to move on. It was a game they would have hoped to have taken something from but they failed to reach the heights they would have wanted.

A trip to Selhurst Park was always going to be tight and tricky. In the end it was a disappointing result, with an own goal costing them. I feel they will be safe this season but they've got to be careful they don't get sucked into a relegation fight.

Former Arsenal forward Alan Smith believes Arsene Wenger holds all the power at the club and the Frenchman will decide when he leaves the Emirates.

Absolutely shocking! They appeared to give up, there was a lack of motivation and organisation. It was a really poor day for all concerned.