Raheem Sterling became the first Englishman to reach 100 goals for Manchester City since Dennis Tueart in 1981 and his current upward trajectory is destined to make him a global superstar.

Against Real Madrid, City were without top scorer Sergio Aguero in the second leg of their Champions League last-16 tie, but it was once more Sterling who underlined his growing influence by helping his side reach next week's quarter-finals in Lisbon.

The Argentinian is still recovering from knee surgery but in his absence, it was the England international who took control of the contest early on. After the misplaced opprobrium, here was the latest in a lengthening list of landmarks.

Last year, he was deservedly named Footballer of the Year - earning 62 per cent of the vote of more than 400 members of the Football Writers' Association. He was a key member of the City team that saw off the threat of Liverpool to claim a second straight league title, while he has also been a prominent voice in the campaigns against racism in the game.

Sterling has come a long way since his first goal for City in a 2-0 win over Watford back in August 2015 when Manuel Pellegrini was still in charge but it remains debatable whether he is an elite-level finisher. With the tie on a knife-edge on Friday night, he sliced a shot that Thibaut Courtois helped wide, but it was his movement that presented the chance.

His maiden strike against the Hornets proved a precursor to many of the 99 that have followed - including his finish against Real - from within 10 yards having been pushed through the middle as part of a half-time tactical switch. Pellegrini said afterwards: "Raheem played very well. It was good for him to score. He worked very hard and I'm sure he'll score more goals."

But a hat-trick in a 5-1 win over Bournemouth in the autumn aside, it was far from a prolific season for the winger, with his six Premier League goals in total then giving way to a summer of negative tabloid headlines following England's humiliating Euro 2016 exit.

That began to change with Pep Guardiola's arrival. From being accused of flaunting his wealth and a fleet of supercars, Sterling went about enhancing his undoubted talent. He transformed the three-car garage at his Cheshire home into a gym to work out after training. Those obsessed with the size of his garden were disappointed to learn he had redesigned part of it into a pitch with full-sized goals so he could practise his finishing.

It's been paying off over the past two and a half years - Sterling took 153 appearances to reach half a century of goals in December 2018, but he has raced through his second 50 in just 89 appearances.

City had kept just two clean sheets in their previous 11 Champions League games, while they had also lost six of their last seven when conceding first, so it was imperative that Guardiola's side took control of this tie early on.

The Catalan stressed that the aim was for his players to play with rhythm and to "be themselves" against a side used to winning this competition, and the aggression he had called for was seen in the opening 15 minutes.

Naturally, Sterling - with his high pressing - was at the fore but Real were punished for their own sloppiness. Eder Militao had the task of replacing Real's leader and inspiration Sergio Ramos, but it was his more experienced partner Raphael Varane whose mistake presented the City forward with the most simple goal of his ton.

With 31 for the season, Sterling has reached his best-ever tally for a single campaign in top-flight football, and it was the type of instinctive finish that has become his trademark, alert to the opportunity and clinical from eight yards out.

Following his opportune strike and with his tail up, he nearly found goal No 101 when he turned on the edge of the box and rippled the top of Courtois' net. But it was never going to be a straightforward evening for the hosts, and their history of struggles in the latter stages of this competition.

Real arrived in Manchester with a deficit but with pedigree. Zinedine Zidane remains the only manager to have won three Champions Leagues in a row and the Frenchman had never lost as a manager at the knockout stage, recently adding a second La Liga crown to those successes during his first Real stint.

The Real head coach proclaimed a year ago that winning the Spanish title was Madrid's priority this term but after a 34th championship was won at a canter, Zidane has put conservatism and solidity ahead of egos and galacticos since the restart. That evaporated in the Mancunian humidity as Varane compounded his earlier error to present Gabriel Jesus with the chance to finish the tie midway through the second half.

Zidane had provided the pre-match fireworks by revealing that Gareth Bale was not named in Madrid's squad because the Welshman "preferred not to play", but it was Sterling who sparkled on the main stage, as he has been doing when it matters for some time.

For Guardiola, wedded to his Barcelona heritage, vanquishing the record 13-time European Cup winners is extra sweet, and Sterling will have played an integral part if the next fortnight's festival of football in Lisbon ends Sheikh Mansour's quest for the holy grail.

Sterling has been inextricably linked to Guardiola's struggles to replicate the Champions League success he enjoyed at Barcelona. He was memorably omitted from City's starting line-up as part of a cautious approach that backfired in the first leg against Liverpool in April 2018.

There was even greater notoriety last season when Sterling was denied his hat-trick by a VAR call in stoppage time as City exited at the hands of Tottenham at the quarter-final stage.

It is nine years since Guardiola last won this competition with it proving elusive at Bayern Munich. Back in 2011, it was a Lionel Messi-inspired Barcelona that gave Manchester United a 3-1 lesson at Wembley, and in Aguero's absence, there is a growing feeling that this is Sterling's time to turn talisman.

Guardiola is now rebuilding his team around him. The likely sale of Eric Garcia after the youngster rejected a contract extension will add to the departures of Leroy Sane and David Silva this summer. City are targeting another four fresh faces to add to the captures of Nathan Ake and Ferran Torres this week for a combined total in excess of £60m.

City know they must improve if they are to prevent Liverpool from having things their own way again next season, but with the coveted Champions League trophy moving ever-closer in the foreground, there is no player more indispensable to the club's progress than their No 7.

Aguero - streets ahead on 254 - knows his currency has always been goals, but Sterling is not just a footballer but a pioneer and a symbol of a diverse modern country. He has developed into a beacon of hope for not just aspiring black footballers but young players of all cultures. 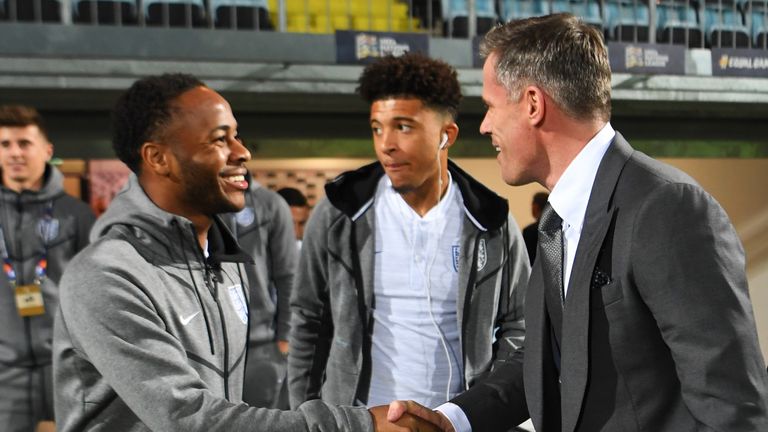 "I never envisaged he would become as good as he is and I thought Liverpool had secured a good deal to get just under £50m. I was wrong."

Jamie Carragher on Sterling in November 2019

He was rightly hailed for his handling of racial abuse both online and in the stands. In March last year, England manager Gareth Southgate said: "I'm so impressed by his maturity and the way he has spoken out on important subjects. It shows huge social conscience and he really is developing into an outstanding role model for people to follow."

Exactly 12 months later, Sterling sat down with Sky Sports' Laura Woods to reflect on his five years at the Etihad since his £49m move from Liverpool, derided by some rival supporters at the time as a "waste of money".

"I don't know where the time has gone but it's been a great learning process and it's proven to be a great next step in my career," he told Sky Sports. "[The next step] I want to achieve is definitely to win the Champions League, and something with my country.

Make that a hundred 💯⚽️ @mancity

"I think that is the ultimate, and nothing could beat that to be honest with you. I want to bring something home for England, for sure."

His best years remain ahead of him, with every metric pointing towards Sterling heading in one direction. Only Mohamed Salah (322) had more touches inside the opposition box in the Premier League last season than Sterling (302) - but played one fewer game.

Being in the right place at the right time has been a huge factor in Sterling's goal output. The timing of his movement is something that he has worked on endlessly with his manager. Much of City's build-up play is designed to funnel the ball, sooner or later, towards their wide forward. Both team and player have become experts at making it happen.

At 25, Sterling is still yet to reach his peak and yet he acknowledges his position as a mentor for the likes of Phil Foden, with the expectation he now faces in trying to replace David Silva's creativity from midfield.

It will be a different pressure to the one Sterling felt when he made the move from Liverpool five years ago with an unfair reputation as someone solely motivated by money.

Changing people's perception, calling for fans to unite against the discrimination and abuse that has overshadowed this sport, standing shoulder to shoulder against all forms of prejudice, Sterling is not just playing the game, but changing it.

Having reached a ton of goals in a little under 250 games, few would count against him reaching his second in double-quick time. No City player has featured more under Guardiola, with his 193 appearances also underlining that undervalued quality of availability.

Sterling is seldom seen in the treatment room, and the player himself appreciates the role of Guardiola in improving his finishing.

"Pep's had great faith in me since I've been here," he added. "Not just with me but with the entire team, he's helped us massively to develop a winning mentality."

In November 2018, Sterling signed a new deal worth £300,000 per week extending his stay at City until 2023 at a time when the statistics showed that only Salah had more goals and assists combined since the start of the 2016/17 season.

Speaking on Monday Night Football, Jamie Carragher said: "There are eyebrows raised because of the figures involved, but when you look at the stats, he is in the company of players who are earning those figures and people are saying are the best players in the league.

"Go back to England in the summer and this lad gets far too much criticism. When you look at what this lad is achieving, the move to Manchester City, the pressure and the price-tag. Plus Guardiola, who everyone wants to play for, came in and can get players from Spain and anywhere in the world.

"This young English lad is thriving under maybe the best manager in the world and in the best team in the league. He deserves everything he gets."

The attacking trident of Sergio Aguero, Kevin De Bruyne and David Silva have established the blueprint for City's success and are among the greats of the Premier League era. Sterling has more than earned his place in that company, going from strength to strength, and making those numbers look cheap.

Obvious comparisons have been drawn between the City star and Jadon Sancho, tipped to join Manchester United this summer. The 20-year-old has produced impressive figures himself in the Bundesliga, but having been allowed to leave City at a time when Sterling was making his mark, United will be hoping Sancho can follow the same trajectory as the leading man across town.