Dean Smith and Aston Villa used the pandemic to get their act together; they are now one of the most refreshing teams in the Premier League; follow Man Utd vs Aston Villa on Sky Sports Premier League and Main Event from 7.30pm on New Year's Day; kick-off 8pm

Aston Villa were 'doing a Fulham' they said. Or, in other words, spending big before heading back to the Championship after a quick Premier League hello.

And in fairness, Villa were heading there in early March before football shut down.

The pandemic has brought its difficulties in football. Dean Smith, who lost his father to Covid, felt them acutely.

But the time also allowed Smith to watch all 28 of Villa's Premier League games, and hold a video review with every player. Meetings even overran for hours organically, an impossibility during a normal season, Smith admitted.

Quite simply, Smith and Villa used the time to get their act together.

They somehow survived; at its worst, Villa were three points adrift with two games remaining, having played a game more than their rivals.

Now they are one of the most refreshing and effective teams in the Premier League. They are the youngest, with up to seven English players in their starting XI at times this season, and play a brand of football big teams cannot cope with.

They go into the New Year's Day trip to Manchester United, live on Sky Sports, having picked up 26 points from 14 games, just nine off their entire total from last season.

So, how did Smith turn it around?

First he had to right a big wrong. Pre-lockdown, Villa and Smith were tactically raw, going toe-to-toe with all opposition regardless of form or stature, and playing their way.

Brave? Yes. But it stank of inexperience. Their way was to open up the pitch: you have a shot, we have a shot. The gap between defence and attack was enormous, meaning once the opposition broke through the lonely, scattered isles of midfield, they had space to run at the defence.

They faced more shots than any Premier League side by some distance, but were creating more chances than nearly two-thirds of the league. It was imbalanced.

The side Smith had put together was good enough to stay in the Premier League, but Villa were soon to be added to the long list of promoted teams who had gone back down with the style that brought them up. Villa were sinking even before their 4-0 defeat at Leicester in March, the final Premier League game before football was halted.

"We walked off the pitch at Leicester, conceding too many chances and too many goals," Smith said in July. "We had a gung-ho, open nature, trying to win games, and it just felt we needed to have more discipline, and not just in our back four, but the whole team." 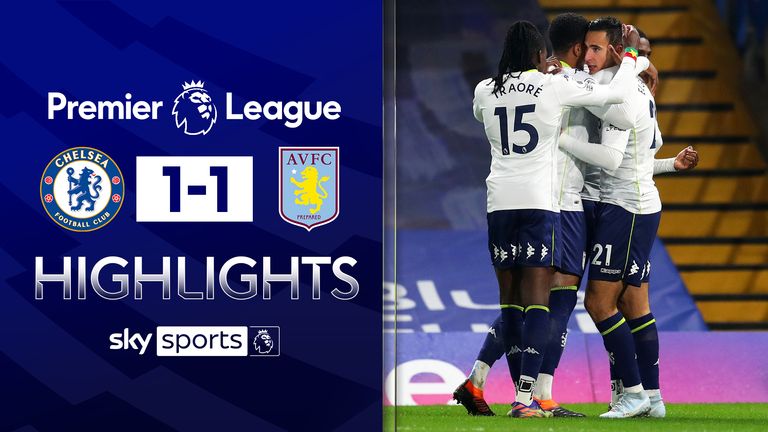 FREE TO WATCH: Highlights from Chelsea's draw with Aston Villa.

So they returned in Project Restart and tightened up, trying less but allowing less. The results did not initially match, but their approach in their final four games - including wins against Arsenal and Crystal Palace - showed Smith had learned a vital Premier League trait: how to stink out a football match and get a result.

And that is no disrespect, because what they applied to survive last season is now being used as a springboard to success at the other end of the table.

A change in shape has been effective. Villa's defence is not necessarily sitting back more, but the unit is far more compact. In fact their defence has pushed slightly higher - their starting distance from goal was 19th-deepest in the Premier League in 2019/20, now 13th - but crucially, that defence has an extra layer of rind in front of it in the form of Douglas Luiz, backed up by the battery of John McGinn.

Their front three also start from a deeper base, meaning the counter is so often on. Their big wins against Arsenal (3-0) and Liverpool (7-2) were perfect examples.

Villa made just 52 direct attacks in 2019/20 - ranked 15th in PL - but Smith's side now top that table with 38 already. They are not pressing as much from the front - only Newcastle have registered fewer high turnovers than Villa's 76 this season - but at the other end, they are clued up to opposition press. Only three teams have conceded fewer shots following a high turnover, whereas last season Villa ranked third-highest.

What does it all mean? It means Villa create a better quality of 'chance' and concede fewer. Or in other words: successful football in its simplest form. While their shots have only increased 15 per cent since lockdown, their big chances have gone up 50 per cent.

Incredibly, their shots faced is down from 18 per game to 10, and their errors have been cut by 60 per cent.

The approach gives Villa's energetic attacking trio of Ollie Watkins plus two from Anwar El-Ghazi, Jack Grealish, Trezeguet and Bertrand Traore more grass to run into. It means their central defenders, two from Tyrone Mings, Ezri Konsa and Kourtney Hause can defend to their aerial strength, rather than runners charging at them. They have kept eight clean sheets, one more than their entire tally last season.

"I want the team spirit to want to keep clean sheets, have a great pride in that," Smith said recently.

Game management has improved drastically - Villa are the only Premier League side not to lose a single point from a winning position having thrown away 23 points last season, second only to West Ham - another vital trait Smith has picked up.

It is lower risk but certainly not lower reward, and clearly the result of training-ground hours.

Familiarity has been key. Villa have used fewer players (19) than any Premier League team, made fewer subs, and made the fewest starting XI changes (13).

Villa's energy helps, and that horsepower is down to in-game conservation. They have out-sprinted the opposition in only four of their 14 games this season - two of those were defeats against Brighton and West Ham - yet they top the Premier League table for shots from fast breaks. They pick their time to burn fuel.

Villa have weighed the scales between defence and attack perfectly. Smith, a Villa fan himself, does not give much away, but balance is his buzzword. 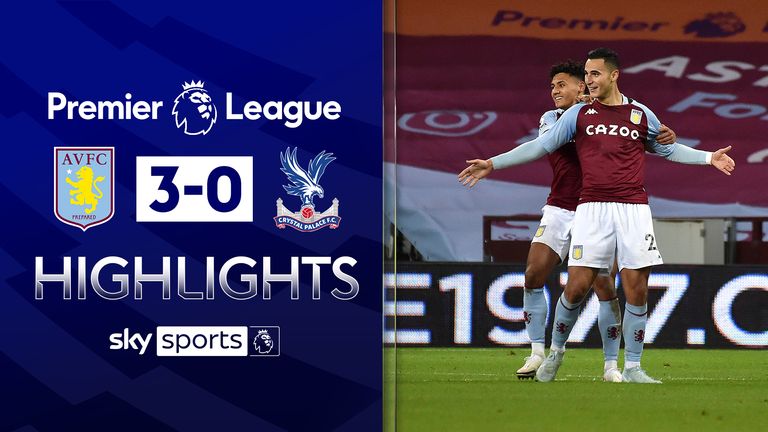 In September, he said: "It's the balance between defence and attack. It's something that's very hard to get right in football."

The same in October: "It's about having that balance. We came back after Project Restart and we were better defensively but lacked a bit going forward but we've managed to find that balance now, certainly this season."

And just this week: "You've got to find a balance between defending and attacking and I thought we did that really well."

This was certainly not the narrative before lockdown, and Smith should be applauded for surrendering the toe-to-toe football that had got him so much praise at Brentford. Many managers would stay stubborn.

Some personnel changes have helped. In Emi Martinez they have a goalkeeper who radiates confidence to the back four. In Watkins, they have a forward who constantly runs channels and can hold up the ball. It says it all that Watkins has gone seven games without scoring yet the Villa machine still works, with him very much a vital cog. Wesley, though young and improving before his ACL injury exactly a year ago, simply did not allow Villa that dynamism.

Matt Targett is most-improved, and though Mings is the leader in the back line, Konsa is the best defender.

McGinn, Villa's player of the season in their promotion year, is finally fit and performing, having spent much of Project Restart playing through pain.

"We have grown, become Premier League-ready and our acquisitions in the summer have strengthened us," Smith said last week.

"Tactically they are proving there is a growing maturity within what is the youngest average-age team in the league. It bodes well for the future, for sure."

And it speaks volumes of Villa's transformation that we are three-quarters into this feature having barely mentioned Grealish.

The most in-form player in the top flight and the easiest on the eye, Grealish knits it all together. For a team now happy to soak up when needed, his ability to bring Villa up the pitch by pass or power is valuable. His weight of pass in tight areas is footballing craftsmanship.

Try to stop him physically and he will win fouls, still more than any Premier League player, and Villa are finally making the most of those set-piece situations. In 14 games they have scored 10 set-piece goals, just six short of their entire tally for last season, and they are creating more chances per game from set plays since lockdown (2.08 compared with 1.4).

The stats are telling, but there is no metric for team spirit. The lack of fans at Premier League games has at least highlighted Mings' almost-deafening influence. He is Villa's commentator, barking orders, encouraging and pushing his team-mates to their limits. In Matty Cash's second competitive game, a 3-0 win at Fulham in September, Mings was not shy in letting the right-back know where he was going wrong, and everyone in the press box at Craven Cottage knew about it.

At their Bodymoor Heath training ground, Grealish, McGinn and co are like kids at a football camp. And after the stoppage-time win at Wolves, coming after a run of four defeats from five, Villa's huddle in the middle of the pitch showed a unity that was missing at the club for many of their troubled years before relegation in 2016. Mings then posted a strong defence of match-winner El Ghazi, criticising some Villa fans on social media for the abuse he had received. It is a close-knit environment and the results are clear to see.

Good morning villains. I really hope all you who were berating and hounding El Ghazi enough to make him suspend his social media, are in his DM’s today, apologising. A team game utilises a WHOLE squad and we need everyone... may your apology be as loud as the disrespect.

Like most of the top 12, their points tally and position is admittedly skewed by a bizarre Premier League season so far. A couple of defeats may see them hanging around mid-table again, but one surety is Villa's improvement and Smith's influence on that.

Through a less is more approach, Villa are a Premier League staple again.