Aston Villa don't want to sell their captain, and have offered him a new and improved contract to try to persuade him that his future lies at Villa Park; he still has four years left on his existing deal, which was signed in September

Manchester City are reportedly prepared to pay up to £100m for Jack Grealish and make him the most expensive signing in the history of English football. So what does the Aston Villa captain offer to command a record-breaking fee?

There was national clamour for Grealish to start for England last season after he shone for a second successive campaign in the Premier League with boyhood club Aston Villa. That sentiment swelled during Euro 2020 when the Villa captain produced two assists during his first three cameo appearances in the competition.

But the clamour had substance beyond his tendency to produce eye-catching, forward-thinking endeavour.

The 25-year-old defines a 'talisman' for Villa, but he was frequently accused of roaming too much when his side's back was against the wall. However, the team slumped when Grealish suffered an innocuous injury in February and ended up missing 14 league starts: Villa's win percentage more than halved without him in the starting XI.

The 'fouls won' statistic appears to have risen to prominence in tandem with Grealish and there is little surprise - his close control drew a league-high 110 fouls last term, some 22 more than any other player - a staggering statistic when you consider he missed a third of the season through injury.

Besides being fouled a lot and creating space for others, he also belongs to an elite class for creating goals: only De Bruyne registered a superior ratio for assists per 90 minutes last season. Yes, if City sign Grealish they would have the league's top two creators in their ranks - a potent statement of intent for their title defence. 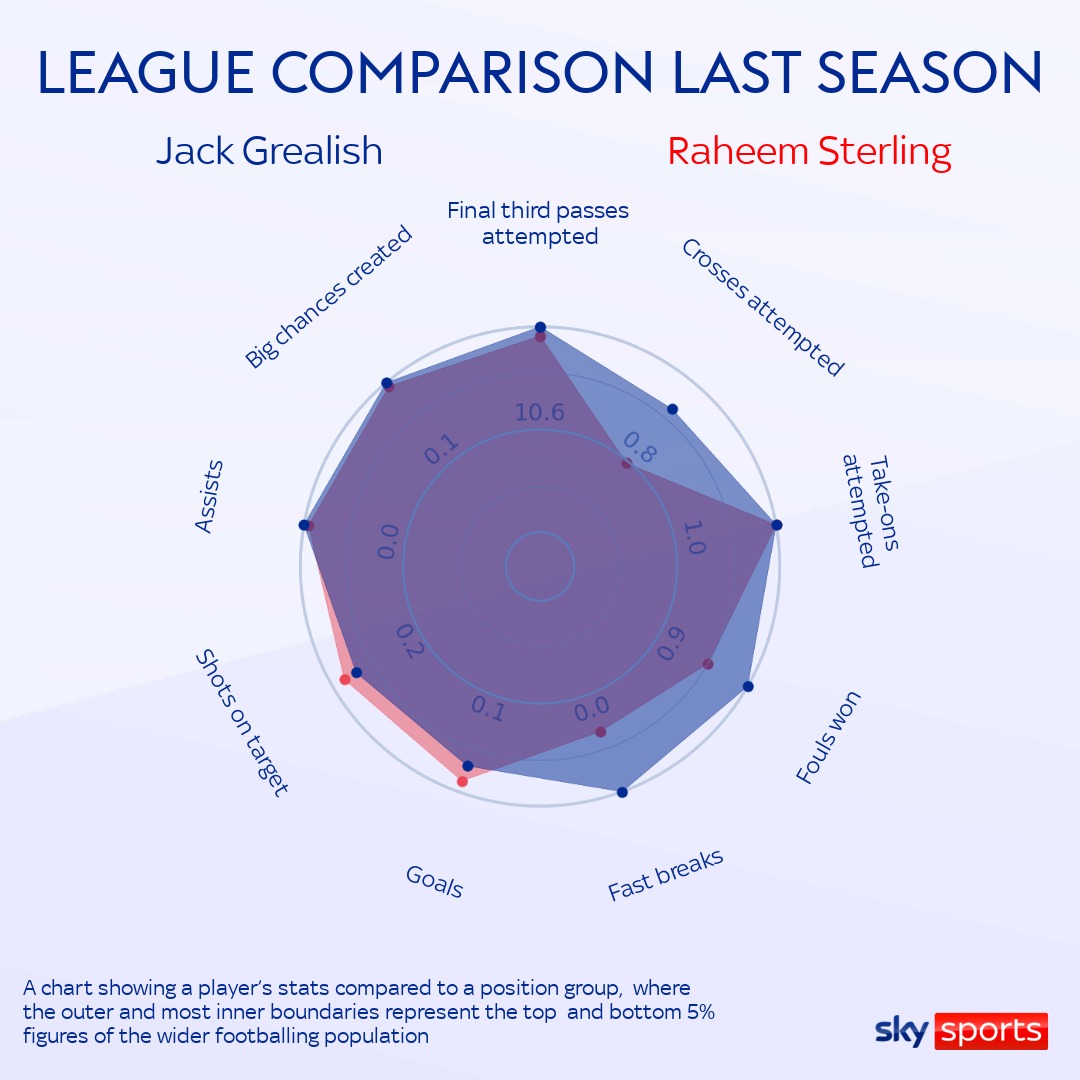 The majority of his ball carries come from the favoured inside-left channel to drive upfield directly, but he also frequently bamboozles full-backs to cut into the penalty area from the wide-left flank. 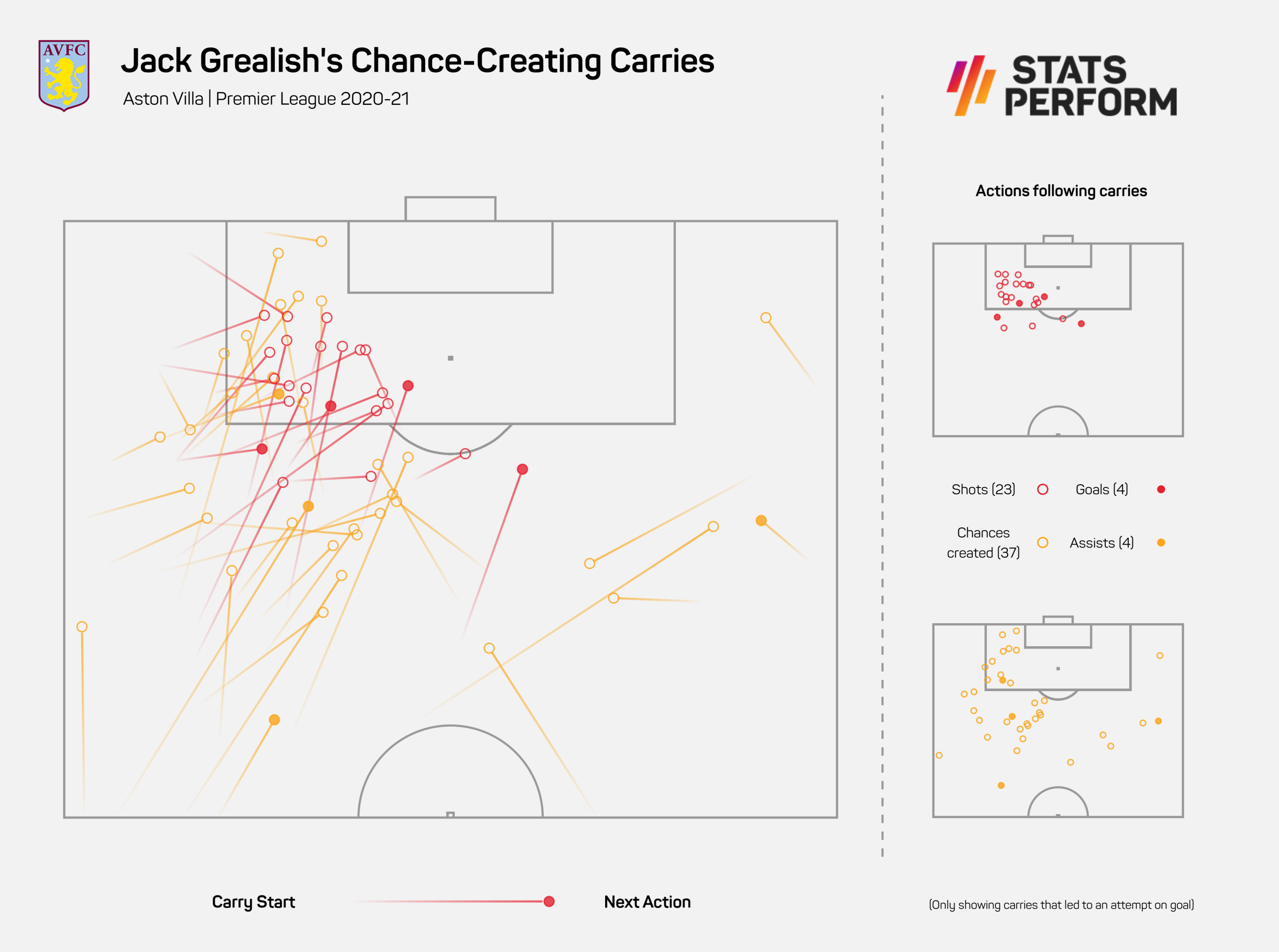 Only five players carried the ball at their feet for a greater distance than Grealish in the Premier League last term - three of whom were centre-backs typically edging upfield from deeper positions - while he also ranks among the elite for drives into the box.

Grealish would also offer City so much more. As the interactive table below shows, no current City attacker comes close to the Villa captain for duels and fouls won, which would further strengthen Guardiola's customary high press.

Sterling offers a greater goal threat, and De Bruyne is unquestionably the league's finest passer, but Grealish blends the best of both and would attract defenders to create the spaces City like to exploit.

City appear prepared to dig their heels in and stump up a record-breaking fee to prise Grealish from Villa Park after spending almost his entire life at the club, which marks the 20th anniversary this year.

Few would doubt the potential return from that investment and the underlying statistics certainly bode well...

Aston Villa supporters have been hailing him for years, celebrating a special talent which had emerged from their youth ranks. It took some time for supporters of other clubs to get on board but Jack Grealish and his X-factor has won over all the judges now. At Euro 2020, the sound of England supporters cheering his warm-ups and chanting his name, urging Gareth Southgate to throw him into the action, was the perfect illustration of that.

Inside Wembley this summer, the change in approach from opposition defenders when he came into the game was clear to see. They dropped deeper. They doubled up. They looked nervous and wary of what might come next. It's a growing trend we've seen in the Premier League and Grealish's skill, Grealish's reputation has now earned international respect, too.

That tantalising possibility of what Grealish could do at the top end of the Premier League or in the Champions League is clearly question being pondered at Manchester City. The great Pep Guardiola attracted by the potential of greatness from Grealish.

But those deep Villa roots mean Grealish won't be easy to prise away from his hometown club. His iconic status there would be enhanced if he stayed on. It's a pivotal moment in his career and, just like during the Euros, there is real intrigue with what he does next.

Of course, if Villa are to lose Grealish, the impact will be felt. The three months without him last season were a worrying case study: Villa won just 21 per cent of their games without, and won 54 per cent with their skipper.

But Villa's glass should remain half full. In NSWE they have owners clearly willing to make heavy yet sound investments and will have undoubtedly planned for Grealish's potential exit - the £38m signing of Emi Buendia and interest in Leon Bailey, linked with the Premier League's elite over the past 18 months, are evidence of that. That should go some way to plugging the creativity gap.

And although he ended up signing a new deal with Arsenal, the attempt to capture Emile Smith Rowe was still a great show of ambition, given Villa rarely sign assets from big Premier League rivals.

Villa aren't new to this. The so-called top six have come calling for their best regularly over the past decade, but unlike when Christian Benteke and Fabian Delph were taken away in 2015, the Villa Grealish might be leaving behind is a strong one. Villa are in the best place they have been since 2010, and the 25-year-old still has a big decision to make.

In Man City he is guaranteed trophies, and those questioning how much playing time he will get should remember Pep Guardiola hands out minutes like no other manager in the Premier League. City made 136 changes last season, more than any Premier League side; it's clear Guardiola doesn't necessarily need a set XI for success, especially with around 60 games a season to play.

And those arguing that a trophy with his boyhood club would be sweeter than anything he could achieve at City should remember Villa's trophy cabinet hasn't been opened since Grealish was six months old.

While Villa are on the up, and a City move undoubtedly brings risks, you wouldn't blame Grealish for backing himself as he approaches his peak years.