When did Liverpool overtake Manchester United in the Premier League?

When did Liverpool become better than Manchester United and is the gap between the teams bigger than ever?

United dominated the Premier League until Sir Alex Ferguson left the club in 2013 - but Liverpool are on course to win their first league title in 30 years and reclaim the mantle as England's top club.

The Merseysiders had ruled English football during the 1970s and 1980s but that sustained top-two success ended abruptly in the penultimate season before the Premier League was formed - with their most recent title in 1989/90.

United took up the torch to win the title in 13 of the first 21 Premier League seasons, but have slipped from the summit since Ferguson's title-winning departure nearly seven years ago.

David Moyes failed to steady the ship and left the club within a year, with Louis van Gaal and Jose Mourinho having brief spells at the helm before Ole Gunnar Solskjaer was appointed a year ago.

In contrast, Liverpool have made just one managerial change in that time, with Jurgen Klopp replacing Brendan Rodgers back in 2015.

Season on season, Klopp has lifted Liverpool a step closer to their first Premier League crown, finishing eighth in his first term, fourth in the following two campaigns, before a remarkable runners-up spot on 97 points last season.

Despite those formative years at Anfield, the German's win rate in the Premier League already stands at 64 per cent - just one per cent shy of Ferguson's record at United.

Meanwhile, United have only finished in the top four on two occasions since Ferguson handed over the reins and achieved their highest league position during that period as runners-up under Mourinho in 2017/18.

Looking at that league form more closely during the Premier League era, United were flying highest during the year 2000, and again in 2009, while Liverpool are currently enjoying their best-ever run of form.

The graphic below shows a rolling average for points per game and reveals how the gulf between clubs had never been greater in August last year, albeit spanning the previous campaign.

Narrowing that down, there were brief spells of parity in the early 'noughties' and the last decade, but the current, growing gap between the clubs is unprecedented in the modern era and stems from Ferguson's departure and Klopp's appointment.

The graphic below reveals how United won more games, more points, scored more goals and conceded fewer than Liverpool under Ferguson, but are inferior across all metrics since his departure. 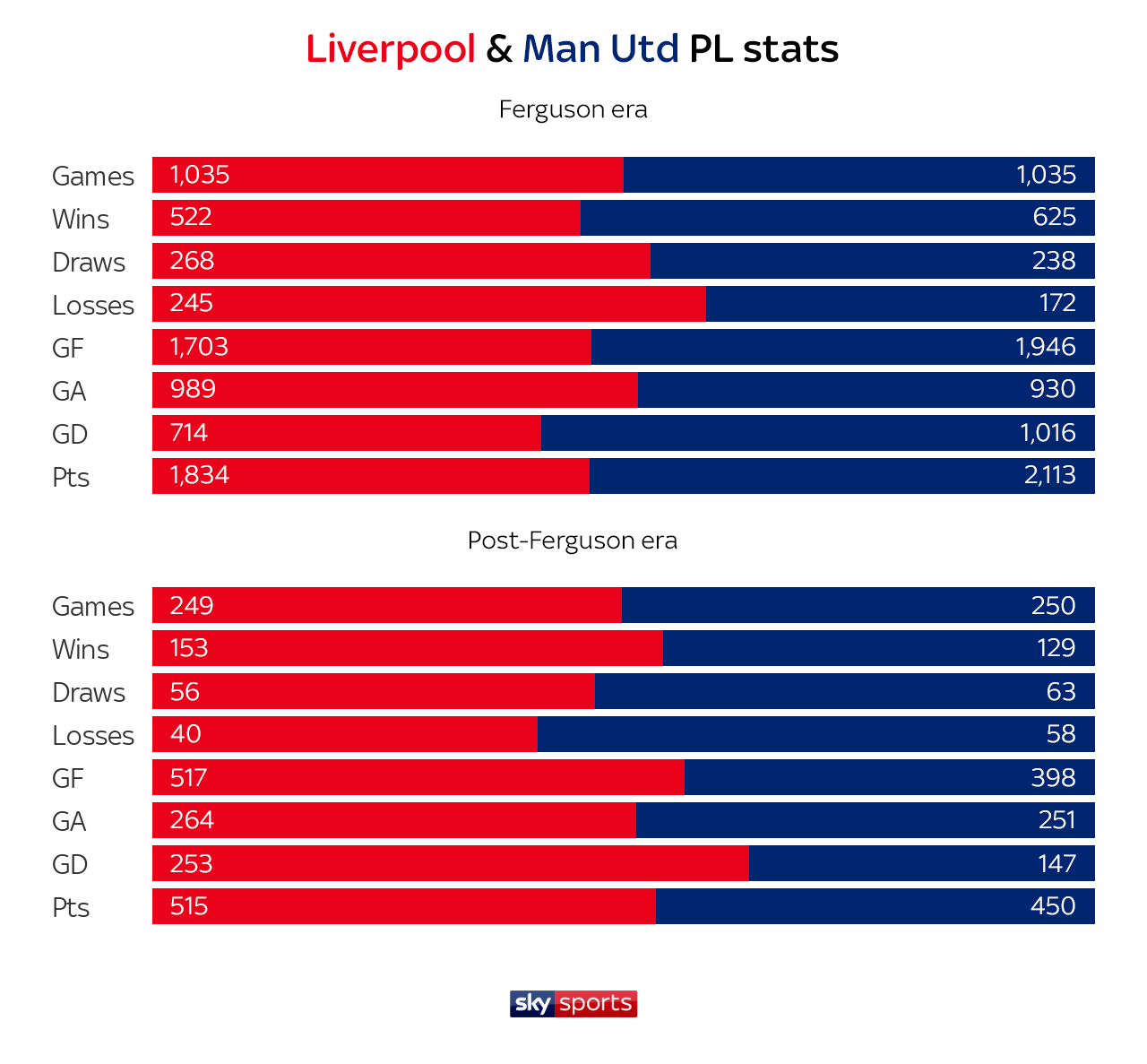 During the entire Premier League era, United are runaway winners for head-to-head contests against Liverpool with 28 wins, 13 draws and 14 defeats - and it is here Klopp ranks fairly poorly with just one win from eight meetings.

Incredibly, Liverpool's 3-1 win at Anfield in 2018 was their first victory over United in the Premier League since early 2014.

So, while Liverpool have overtaken United as the Premier League powerhouse, Klopp's side still have a point to prove and an unbeaten record to maintain on Sunday.

United have led Liverpool in the league table this season, but the sides were divided by just one goal after the opening round of fixtures saw United thrash Chelsea 4-0 and Liverpool beat Norwich 4-1.

Liverpool have proceeded to make the best start to a season in European history and now sit four places above United in the table. Most tellingly, their staggering haul of 61 points is almost twice that of United's - with one game in hand.

While Manchester City, Chelsea and Leicester have triumphed since United's decline, Liverpool are back to their best - but can they emulate the 20-year spells of dominance previously achieved by both clubs?

Upgrade to Sky Sports ahead of Liverpool vs Manchester United and get all 8 Sky Sports channels for just £20 extra a month for 18 months.