MP Tracey Crouch believes the Newcastle takeover would have been "stress-tested more" by an independent regulator, which is at the forefront of proposals following the fan-led review into English football.

The Independent Regulator of English Football (IREF), created by an Act of Parliament, is top of a list of 47 recommendations announced on Wednesday that are designed to make the domestic game more sustainable.

It would have financial oversight of the sport at the professional level and license clubs in the top five tiers of the game, and one of its roles will be to take over the administration of the leagues' owners' and directors' tests.

The Premier League's decision to accept the takeover of Newcastle by Saudi Arabia's Public Investment Fund, despite widespread concerns over the country's human rights record, was met with fierce opposition from the division's other clubs.

And Crouch believes IREF scrutiny of the deal, which she also recommends would subsequently be published, would have made the process more transparent. 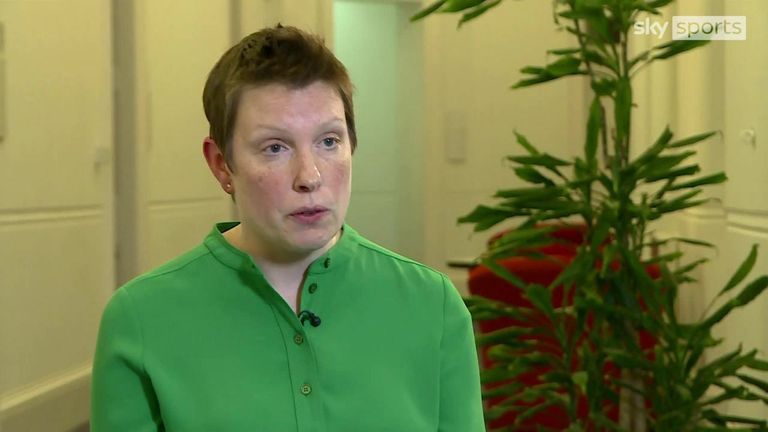 An independent regulator is at the forefront of proposals following a fan-led review into English football, says MP Tracey Crouch

"I certainly can't tell you whether or not this integrity test would have stopped the Newcastle takeover. I don't know the details of it," she said.

"But I would say that it would certainly have stress-tested it more and it would have been more transparent in that testing."

While the Premier League, EFL and FA all welcomed the report and thanked Crouch for her hard work, the English top flight also warned that "any reforms do not damage our game, its competitive balance or the levels of current investment".

A surprising inclusion in the recommendations is a "stamp duty" on Premier League clubs signing players from overseas or from another top-flight side, and that the IREF would have the power to impose the levy should clubs be resistant

"The Premier League can make this change tomorrow," Crouch said. "It doesn't have to be (imposed upon them), but it can be.

"I think there is a recognition among some clubs in the Premier League that, despite everything, all the trials and tribulations around COVID and everything else, we still had a really, really healthy transfer window.

"I think many do recognise that they have a responsibility to redistribute some of that wealth.

"In the past, under the current regulatory system, there is a lack of confidence in that redistribution, because there are not necessarily the restrictions in place around ensuring that there are good owners that are running their businesses properly and so on.

"So actually, there's a reason why the report is structured as it is. You set out all the system that gives it good governance and good regulation, and then you get to the point of redistribution."

EFL chairman Rick Parry in particular welcomed the proposals to reform "the outdated parachute payment system that currently distorts finances in the EFL" and said: "We will continue to engage in a constructive debate about the breadth and scope of regulation required."

The report also calls for the introduction of a shadow regulator at the earliest opportunity, and Crouch is hopeful all the necessary legislation will be in place for it to be fully operational by the start of the 2023-24 season.

Another recommendation is a 'golden share' power of veto to supporters' trusts over club heritage matters, which would enable supporters to prevent clubs entering into competitions not sanctioned by the FA - such as a European Super League.

The government commissioned the fan-led review in the wake of the botched attempt of six breakaway Premier League clubs in April and Crouch said: "I like to think the English clubs have learned their lesson, but you can never quite tell."

The Premier League did not respond to the suggestion of a transfer "stamp duty", but welcomed the review and will examine the proposals moving forward.

"We will study the extensive recommendations and will work with government, fans, the FA, EFL, PFA and other football organisations on these important issues," a statement from the Premier League read.

"We recognise the vital importance of fans and the need to restore and retain their trust in football's governance.

"We also acknowledge the call for some form of independent regulation to protect English football's essential strengths and the Premier League has already undertaken our own governance and strategic reviews.

"It is important to everyone that any reforms do not damage our game, its competitive balance or the levels of current investment."

The Football Association pledged to work with the government over the recommendations.

"We have been fully engaged with the review since its inception and recognise its importance for English football," an FA spokesperson said.

"Many positive changes have already been made, some of which are directly as a result of the review.

"We will digest the report in full and will continue to liaise with the government on potential solutions to the topics and recommendations that have been made."

'Up to govt to deliver on recommendations'

Football Supporters' Association chief executive Kevin Miles welcomed the wide-ranging review and hopes it can act as a catalyst for meaningful change.

"This is potentially a huge step forward for football governance - the government committed to a fan-led review which has listened to the voice of fans," Miles said.

"It is now up to the government to deliver upon the recommendations.

"The review's proposals to strengthen the voice of supporters in the game, protect football's heritage and the pyramid, and provide genuine independent regulation, lay the basis for a prosperous and sustainable future for football at all levels."