Fulham have agreed a £20m deal with Sporting Lisbon for midfielder Joao Palhinha as the newly-promoted Premier League side close in on their first summer signing.

The Portugal international has been having his Fulham medical after agreeing personal terms.

The deal to sign the 26-year-old, who had reportedly been interesting Wolves, is expected to be formally announced soon.

Palhinha made 33 appearances and scored three goals for Sporting in all competitions last season.

Marco Silva's side are in the market for a right-back too, and are still waiting for an answer from Wolfsburg to their £8.6m bid for Kevin Mbabu.

Fulham mark their return to the Premier League against Liverpool at Craven Cottage on August 6, where the west London side could come up against their former player Fabio Carvalho.

On Sunday the 19-year-old was officially unveiled as a Liverpool player after completing his move from Fulham, which had been confirmed in May. 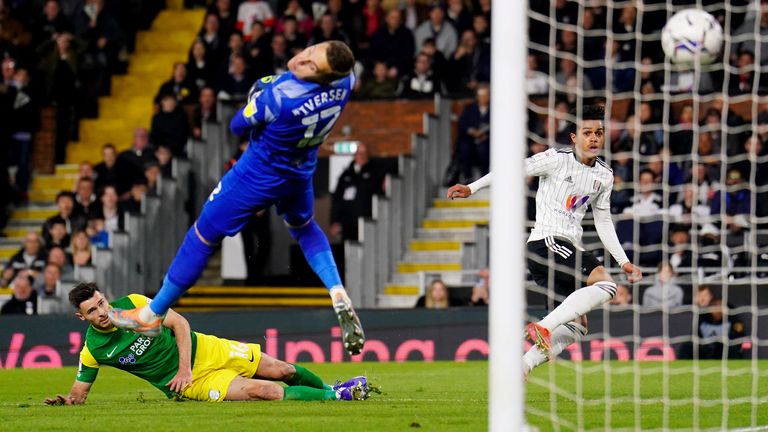 The Portuguese forward has signed a five-year contract at Anfield and will report for the first day of pre-season training on Monday.

"It's just an amazing feeling to be here at one of the biggest clubs in the world, if not the biggest. So, I'm just happy to be here and I can't wait to get started," Carvalho told the club's official website.

"Once you hear that Liverpool are interested, there's only one thought in your mind, which is to join them and try to be in and around the team. Hopefully I can achieve big things.

"I spoke with everyone, and the manager, and it just felt so natural. When things become natural it's just so much easier to make a decision."

"Marco Silva, the way he plays football and made us play football, is more like attacking football and getting goals, which is similar to how Liverpool play, which is to score goals and dominate games.

"That's what I'm here to do, to be able to help the team with my assists, creativity and goals. I'm looking forward to it."

Carvalho, born in Lisbon before moving with his family to England in his youth, will wear the number 28 shirt for Jurgen Klopp's side and will join fellow summer arrivals Darwin Nunez and Calvin Ramsay at Anfield.

Klopp told the club's official website: "What a talent he is, hey? A player who can bring a stadium to its feet. He puts his personality into his performances, he is confident and adventurous with the ball, and he wants to make things happen.

"He is a versatile player for sure and is very much an attacking threat with his creativity and dynamism.

"It was a wonderful season for Fulham last year and Fabio was a worthy winner of the individual recognition he got as a result of that.

"It doesn't really need saying, but it is worth reminding everyone that he will of course need patience. It's a step up, but one we know he is more than capable of making, which is why we were so keen for so long to sign him for Liverpool.

"He has the perfect environment here to learn and develop. He has a dressing room full of the best teachers in football who will help him settle and adapt.

"With us, a player of Fabio's profile will get opportunity along with space to improve, learn and develop further. I'm looking forward to working with him and seeing him in a red jersey."