Significant rise in crime at football matches: Arrests due to fan disorder in England and Wales up by 59 per cent

Football-related arrests were up by 59 per cent to 2,198 - the highest number of arrests since 2,273 were made in the 2013-14 season; reported incidents of disorder at matches in England and Wales were up by 60 per cent compared to the last full season before the Covid-19 pandemic The shocking extent of criminal and anti-social behaviour at matches in England and Wales last season has been set out in data released by the Home Office on Thursday.

Reported incidents of disorder at matches in England and Wales were up by 60 per cent compared to the last full season before the Covid-19 pandemic.

Incidents were reported at 1,609 of the 3,019 matches played in England and Wales over the course of last season - equating to 53 per cent.

In 2018-19, there were reported incidents at 1,007 matches, equivalent to one third of the games played.

There were 441 matches where pitch invasions were reported last season - up by a staggering 127 per cent on the 2018-19 campaign - and 384 matches where a hate crime incident was reported, an increase of 99 per cent.

There were 729 matches where possession of pyrotechnics was reported, and 561 where missile-throwing was reported.

On Wednesday the Premier League announced the introduction of a minimum one-year ban from home and away matches for any fan guilty of entering the pitch or carrying or using pyrotechnics.

Chief Constable Mark Roberts, the National Police Chiefs' Council lead for football policing, said on Thursday: "Disorder is a problem that has not gone away, and throughout the whole of last season we saw an increase in crime at football matches across the country - from the Premier League right down to the National League. 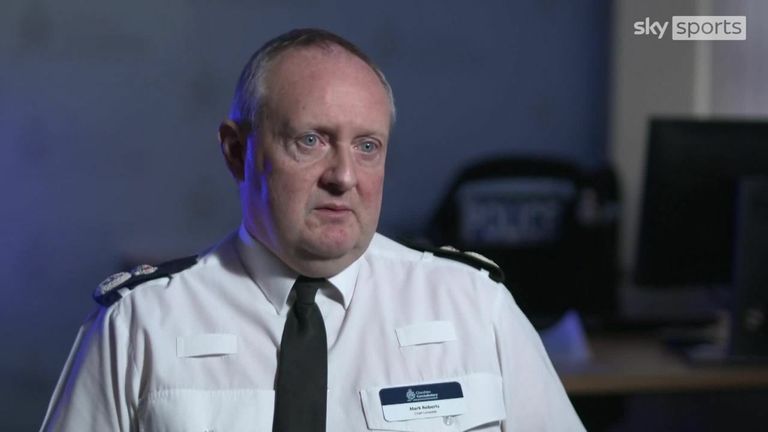 Speaking last December, the UK head of football policing, chief constable Mark Roberts, has criticised the Premier League and EFL for a lack of collaboration on the issue of steward training and information-sharing on known troublemakers

"Following constructive talks with the Premier League, EFL and FA we are keen to support our partners in delivering their proposals - including the introduction of stadium bans for people who enter the pitch, as well as those who use pyrotechnics.

"The statistics released today show a worrying rise in these crimes, which are both extremely dangerous for players, staff and fellow fans alike. As well as being banned, anyone who commits these offences should also expect to be prosecuted by the police.

"We know that drug use, along with alcohol, is one of the key factors which leads to disorderly behaviour, and we are pleased that the Government is adding Class A drugs offences to the banning order legislation.

"This will provide police with another option to tackle criminal and anti-social behaviour by those who are under the influence of drugs.

"Anyone who commits a criminal offence either outside or inside a football ground can expect to face the consequences of their actions.

"The increase in arrests and football banning orders demonstrates that the police are taking positive action to tackle the problems, working closely with the Crown Prosecution Service.

"We collectively need to make football a safe environment for the overwhelming majority of supporters who just want to enjoy the game."

Banning orders have been extended to cover anyone found guilty of an online hate crime connected to football, and the Home Office is committed to adding the possession or sale of Class A drugs to the list of offences for which a banning order can be imposed.

The Home Office has also moved to ensure that the women's domestic game is covered by the banning order regime.

Minister for the Home Office Jeremy Quin said: "Our football clubs are at the heart of our communities, and it is unacceptable that the game we all love is tarnished by a minority of selfish troublemakers.

"The increase in football-related arrests shows that police are taking firm action to stop this disorder and preserve the enjoyment of the game for fans and families which I wholeheartedly support."

CPS: There is no place for violent and hateful criminal acts in football

"At the CPS, we play a crucial role in tackling these crimes and making our national game inclusive, and safe to watch and play in.

"There is no place for violent and hateful criminal acts in football, and incidents such as these have a significant negative impact on victims.

"The CPS is currently working with the police, football clubs, football bodies and charities to seek to stamp out this blight on football."